Home » Sport » The AFL's great divide: Is your club a renovator or a rebuilder?

The AFL's great divide: Is your club a renovator or a rebuilder? "For some clubs, grand final day is towards the end of November and that's because they've got all those high draft picks, but that's never been our go." – Alastair Clarkson, April 2, 2018.

To some ears, Alastair Clarkson's description of the national draft as the grand final for certain clubs might sound boastful. But Clarkson's statement was largely accurate and, if you delve further, hinted at a deeper, troubling truth.

The competition has become increasingly divided between teams that can attract players and those that can't, between clubs that regenerate quickly and those that take an eternity to climb the ladder, between what I would term "renovators'' – exemplified by Hawthorn – and "rebuilders'' who have to exercise untold patience. 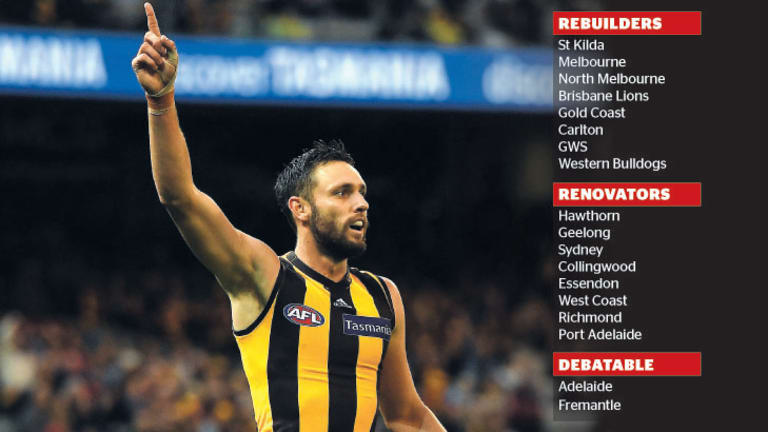 In 2018, it is almost universally accepted that the competition has never been so even, that it's easier to predict Melbourne's weather than tip winners, that the final eight will be a logjam. The underlying assumption is the AFL's socialist system has worked its egalitarian magic.

All that might be true, but here's another inconvenient truth: none of St Kilda, Melbourne, the Brisbane Lions or Gold Coast have played finals since free agency was introduced in 2012, while Carlton played finals only once in that time because Essendon were thrown out of September during the ASADA disaster of 2013.

It's quite conceivable that Hawthorn will be back contending for the premiership before the rebuilders who, in some cases, started pouring the cement six or seven years ago (in Melbourne's case, when weren't they rebuilding?) and whose rise has been compromised by a combination of recruiting blunders and a system that empowers players to choose where they want to play.

Free agency has unleashed a kind of caste system, in which Clarkson's club Hawthorn, Geelong and several mainly well-supported clubs have become the "renovators'' while the Queensland clubs, St Kilda, North Melbourne, Melbourne and Carlton are stuck in the "rebuilders'' class – which is like travelling in economy.

No club is more versed in renovation than the Hawks, who have jettisoned Sam Mitchell, Luke Hodge and Jordan Lewis, yet have chosen not to undertake the laborious and painful path of a rebuild. Instead, they've traded out of the draft, grabbed Tom Mitchell and Jaeger O'Meara and sought to rebound quickly.

They're still fielding teams with significant experience. Presumably, when Shaun Burgoyne and Jarryd Roughead retire, they'll renovate further – through a combination of trade, free agency and the draft, rather than stripping it back completely, as the Blues, Saints and Demons did, implicitly accepting a stint in the cellar.

Geelong are another delighted renovator. The Cats have missed the finals only once since 2011, when they were an old premiership team. They have completely changed their recruiting model, using their capacity to attract players – particularly locals such as Patrick Dangerfield – to remain in the finals frame, rather than retreating down the ladder and using early draft picks.

The Lions and Gold Coast are mired in long-term rebuilds and face the additional challenge of controlling their borders, also known as player retention. St Kilda arguably started drastic list surgery in 2011, when Ross Lyon left the building. Carlton belatedly began in 2015 and still have a long, bumpy road ahead.

North wanted to renovate, but the market has decided that they're rebuilders, as a succession of players – Dustin Martin and Josh Kelly merely the most visible – have spurned offers.

Besides Geelong and Hawthorn, which teams are in the privileged renovators' class? Clearly, there's Sydney (who have not bottomed out since 1995 and are the exception among the northern states), Collingwood, West Coast (having a "reset'' this year), Essendon and Richmond, who are now a destination club.

The Crows would be classified as renovators, except that they've lost so many quality players and have relied heavily – far more than most powerful clubs – on drafting replacements. Fremantle, who embarked on a four-year rebuild in 2016, are following the long path, but also have a game plan of recruiting West Australians from other clubs, e.g. Brad Hill.

Greater Western Sydney are actually a rebuilding club, even though it has the best playing list in the competition; when the Giants lose players, they usually replace them with kids. Port are renovating, albeit without recruiting the absolute top-liners (besides Paddy Ryder).

The Bulldogs won the 2016 flag with a team that was almost entirely drafted; they rebuilt successfully and did it far more swiftly than their counterparts. I would classify them as rebuilders, to this point, although they have the opportunity to try their hand at renovating.

To be a renovator, a club must be able to attract desirable players at a lower price than he can get at a lesser team.

The rebuilder, conversely, can only land a high-value player from another club by paying "overs''. If you're rebuilding, you typically plan to have three post-seasons in which the draft is your preferred instrument before you can think seriously about unleashing the chequebook.

If free agency is the most obvious complication that favours the renovators, academies – northern and now the Indigenous and multicultural versions – have compromised the draft and made it harder for teams that bottom out. The sheer number of teams also means many clubs have only a single pick inside the top 25-30, which places pressure on the lower sides to trade valuable experience – e.g. Carlton and Bryce Gibbs.

Chris Pelchen was list manager at Hawthorn and head of football at St Kilda, where he attempted to persuade Jack Gunston to join the Saints, only to see Gunston opt for his former employer on what he believes was similar money. Having seen both sides of this rebuilding/renovating coin, Pelchen says it is vital clubs "know where they sit''.

It is possible for rebuilding teams to transform themselves into renovators, and for the smug renovator to find his side demolished and be forced to start from scratch.

Carlton, as Pelchen notes, are the most interesting of the 18 clubs, having fallen from the ultimate renovator ("we don't rebuild at Carlton") into a team that had no choice but to undertake one of the most difficult list reconstructions yet.

The most dangerous outcome, though, is the one that threatens the Suns and Lions: the perpetual rebuild, in which an O'Meara, Dion Prestia and Josh Caddy leave and are replaced by draft picks, whom you have to pay excessively to keep – or lose.

Consider this scenario in the near future. The Suns or Lions draft Sam Walsh, a Geelong Falcons kid who is rated in the top 3-4 players and may be the top midfielder in the draft. He stays for a few years, before family ties – and the prospect of success – sees him seek a trade to (no drum roll needed) Geelong.

It's no wonder the AFL is keen to find mechanisms that enable the rebuilders to move up the ladder faster. Perhaps, instead of just speaking to the premiership coach at season's end, the AFL commission should seek an audience with the coach of the wooden spooner, too.