Home » Sport » After Patrick Mahomes’s latest big week, it is clear nobody on Earth is having a better 2020, on or off the field 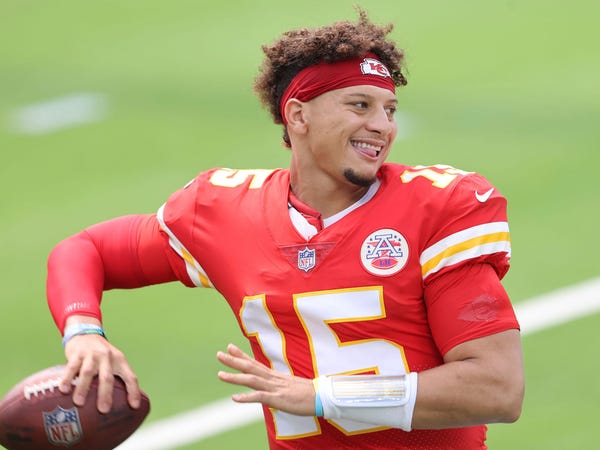 It feels like a safe assumption that this is the best year of Patrick Mahomes' life.

In the offseason, Mahomes bought a new home, signed a new $503 million contract, and got engaged to his longtime girlfriend, Brittany Matthews.

Finally, at the start of the 2020 NFL season, Mahomes has the Chiefs looking like Super Bowl contenders again and just announced that he and Matthews are expecting their first child.

Take a look inside Patrick Mahomes' 2020.

Patrick Mahomes' brilliant year in 2020 got off to a strong start thanks to a brilliant 2019. 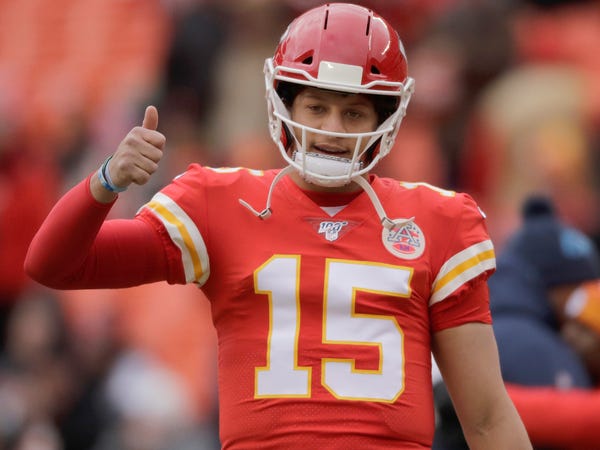 As reigning MVP, Mahomes led the Kansas City Chiefs to a 12-4 regular season, securing the team a first-round bye in the NFL playoffs. 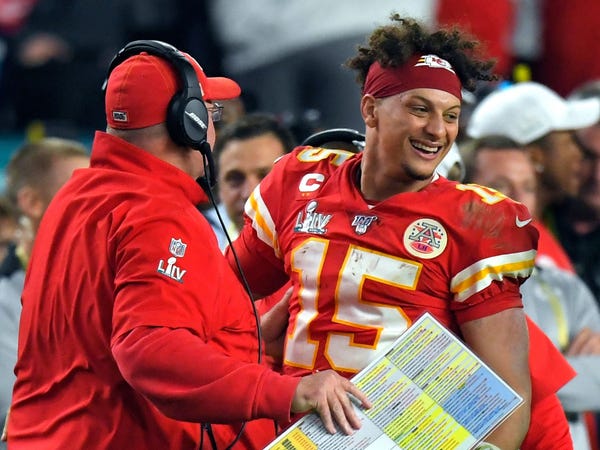 In the divisional round, things looked dicey for the Chiefs early, with the Houston Texans jumping out to an early 24-0 lead over Kansas City. 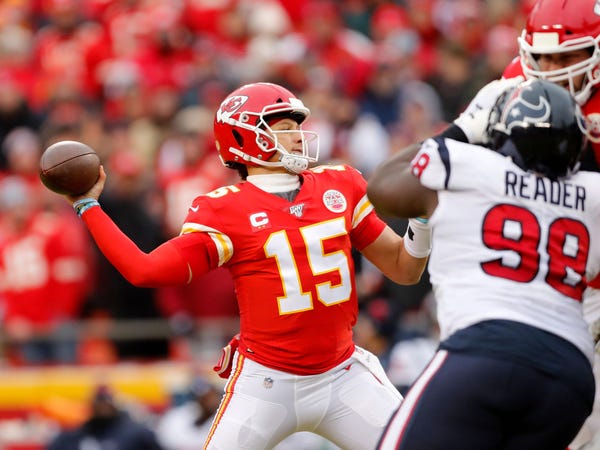 But Mahomes would not be denied, leading the Chiefs on a monumental comeback to win the game 51-31. 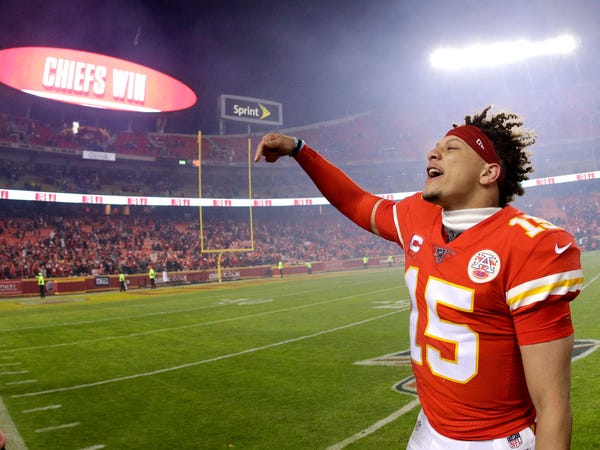 Mahomes' best play of the game came with a crafty toe-drag that helped keep him behind the line of scrimmage while throwing the go-ahead touchdown.

Read more: Patrick Mahomes threw a brilliant touchdown pass where he dragged his toe like a wide receiver to stay behind the line of scrimmage

In the AFC Championship, Mahomes led the Chiefs on another double-digit comeback against the Tennessee Titans, earning Kansas City a spot in Super Bowl LIV. 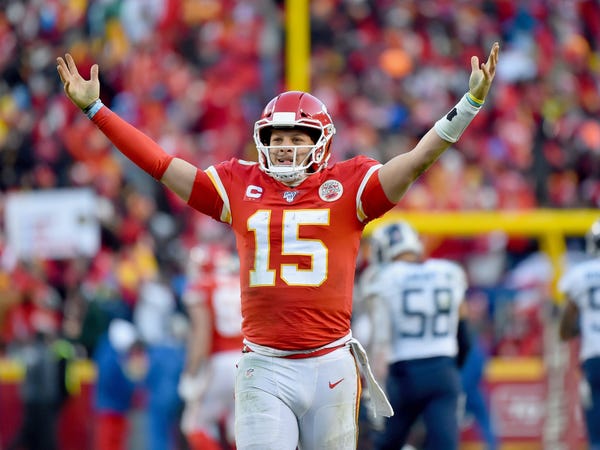 Read more: The NFL world is anointing Patrick Mahomes the best quarterback in the league after a dominant performance to send the Chiefs to the Super Bowl

As Mahomes continued his streak of phenomenal comebacks, reports began to surface about his upcoming contract, with some projecting him to become the first $200 million player in NFL history. Such predictions would wind up a gross understatement. 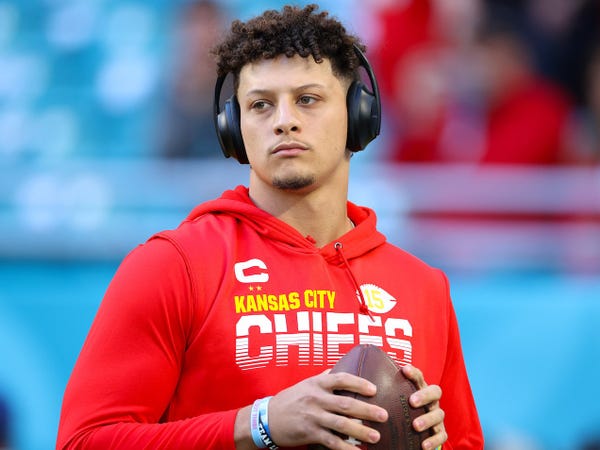 Read more: The Chiefs have been preparing for Patrick Mahomes' next contract for 3 years, and it's going to be unlike anything the NFL has ever seen

In the Super Bowl, the Chiefs found themselves in another hole, trailing the San Francisco 49ers 20-10 heading into the fourth quarter. 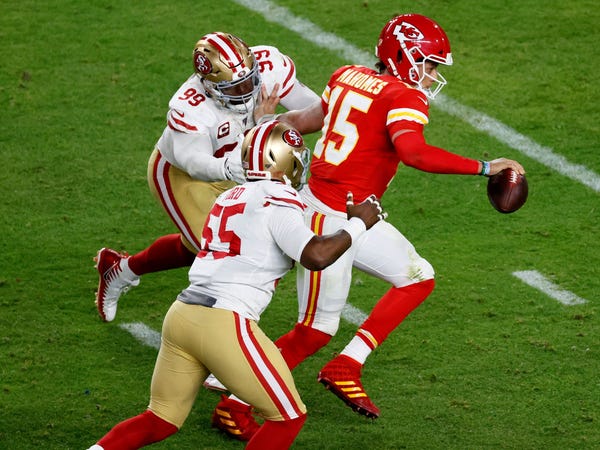 But Mahomes would once again rise to the occasion, leading the Chiefs on three successive touchdown drives in the final seven minutes of the game to lift the Lombardi Trophy. 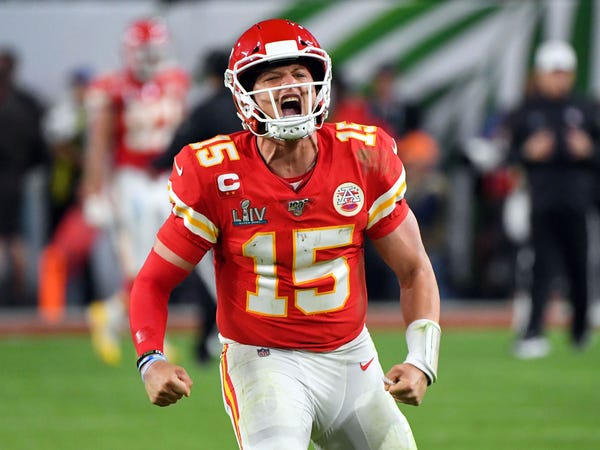 The biggest play of the game came on the first of those three touchdown drives, with Mahomes and the Chiefs needing to pick up a first down on 3rd and 15. Mahomes connected with wide receiver Tyreek Hill to move the chains.

Read more: It's becoming clear the Chiefs never panicked when they trailed late in the Super Bowl, and it was thanks to one reason: Patrick Mahomes

After the game, it was revealed that the play was 2-3 Jet Chip Wasp, which the team calls simply "Wasp," and that Mahomes had called for it himself while consulting with offensive coordinator Eric Bieniemy on the sidelines. 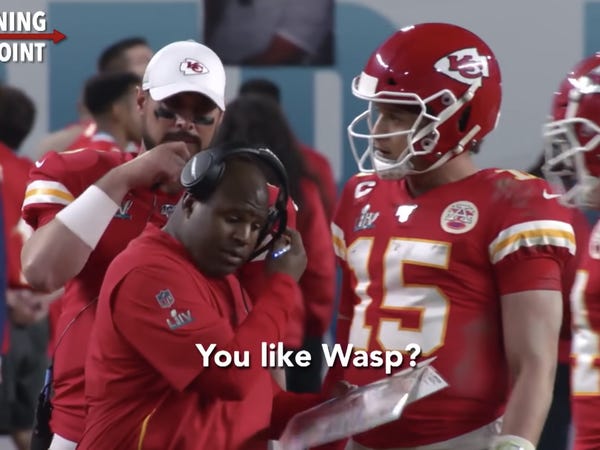 Read more: Patrick Mahomes sparked the Chiefs' Super Bowl comeback by telling Andy Reid which play to call in the most important moment of the game

Mahomes was named Super Bowl MVP for his effort, and after the win, got to finally a sentence he had been dreaming of saying for years: "I'm going to Disney World!" 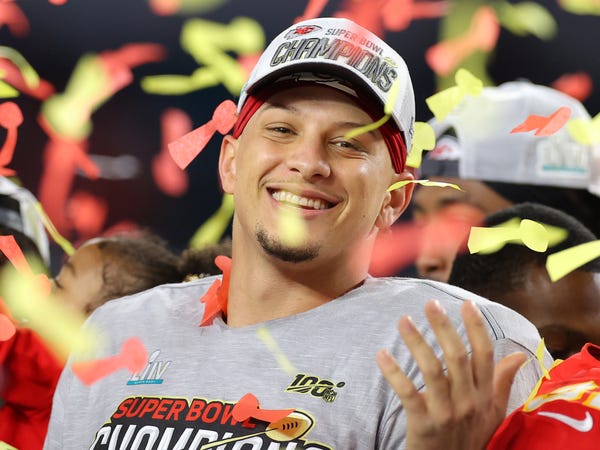 In the offseason, Mahomes spent his time quarantining with longtime girlfriend Brittany Matthews in Texas, first in an Airbnb before buying a home in Dallas. Matthews, a fitness trainer, shared their at-home workouts in a series on Instagram.

Read more: Patrick Mahomes and his girlfriend Brittany Matthews are childhood sweethearts who have both built their own sports empires

"I had to find ways to work out at home," Mahomes told NBC Sports. "We were ordering the resistance bands, and doing pushups and pullups on whatever you can find."

Dreamed of the days you get to do my workouts hehehehe🤩🔥

Mahomes also got politically active, lending his voice to a video put together by several superstar NFL players demanding the league take a stronger stance on issues of social justice.

Read more: Patrick Mahomes' involvement in NFL players' 'Black Lives Matter' video may have had a huge role in changing the league's stance

"I know that with my platform that I have the ability to speak out and people will listen. People will at least listen to what I'm saying," Mahomes said. "They might not agree with everything that I'm saying but they're gonna listen. I think having that platform . . . it's my job and my duty to speak up." 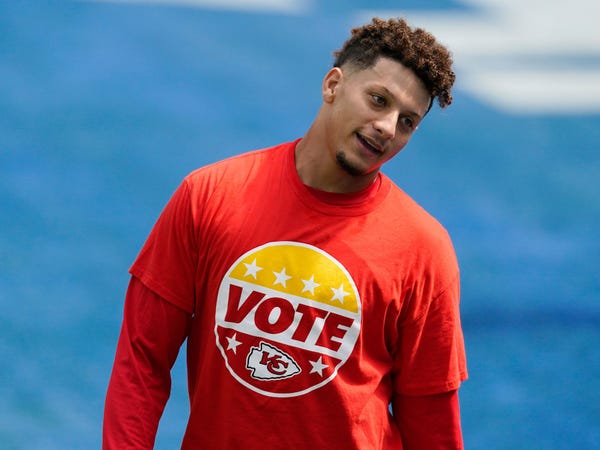 In July, Mahomes' contract extension was announced with a bang. The Super Bowl MVP would be staying in Kansas City for the next 12 years on a deal worth $503 million. 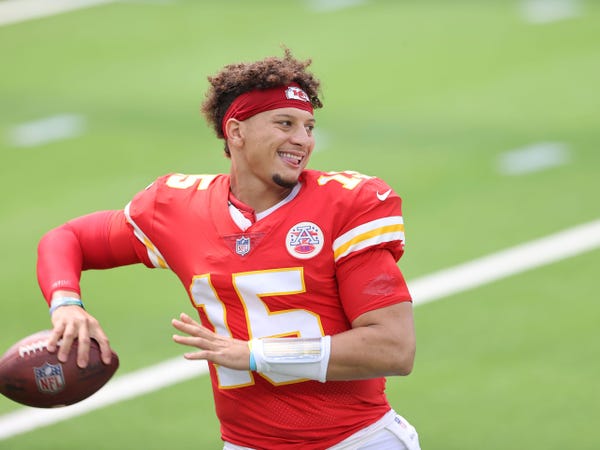 Read more: Patrick Mahomes signs mind-boggling contract worth up to $503 million that would be the richest in sports history

Despite being the NFL's first half-billion-dollar man, there's a good chance Mahomes' contract will look like a deal for the Chiefs in the coming seasons. 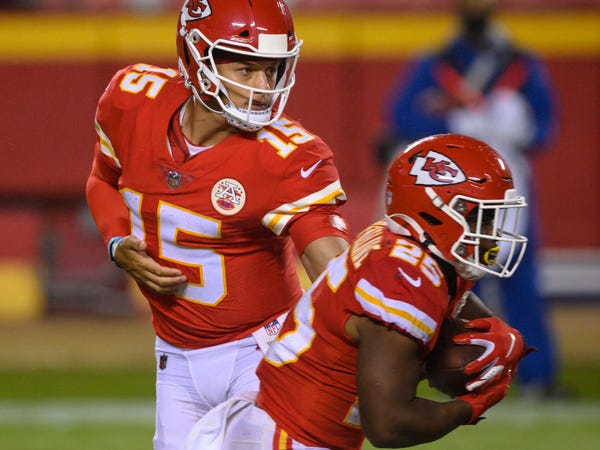 One of Mahomes' first purchases after getting his new contract was a big one — becoming a minority owner of the Kansas City Royals. 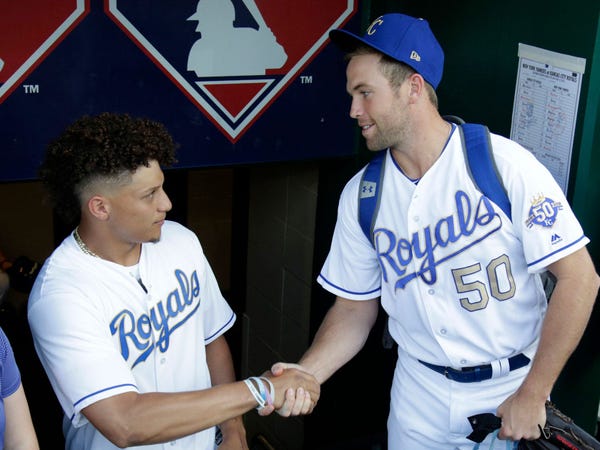 In August, Mahomes and his teammates finally got their Super Bowl rings during a socially distanced ceremony at Arrowhead Stadium.

That same day, Mahomes surprised his girlfriend Brittany Matthews with a ring of her own.

When the 2020 NFL season kicked off, the Chiefs picked up right where they left off, jumping out to a 3-0 record to start the year, including a convincing win over one of their biggest rivals for the title, the Baltimore Ravens. 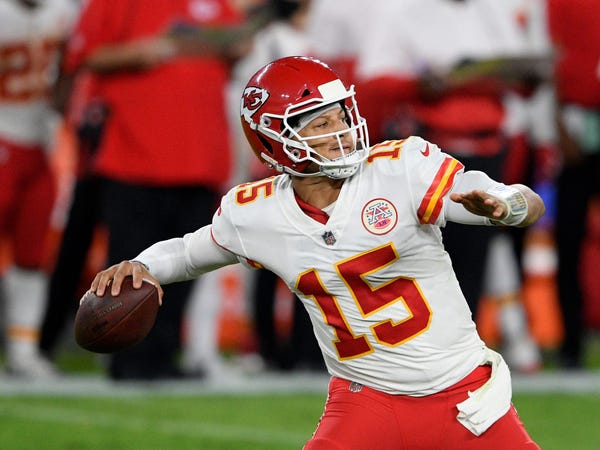 After Week 3, Mahomes and Matthews shared another familial announcement — the happy couple was expecting their first child.

Overall, 2020 has been a pretty good year for Patrick Mahomes. 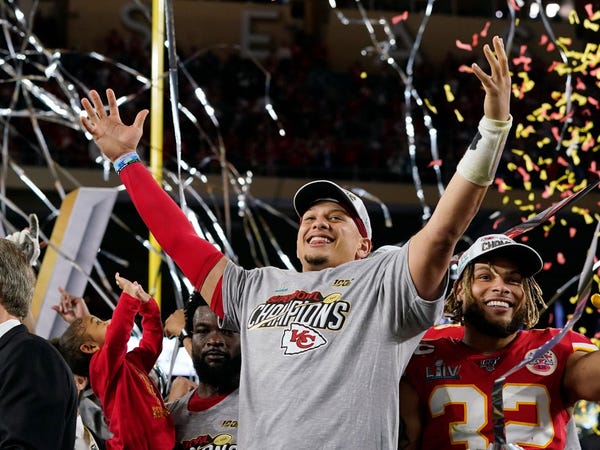