Home » Sport » AJ Styles 'sorry' for slapping Shinsuke Nakamura, Asuka taps Carmella and Money in the Bank is heating up on SmackDown Live

AJ Styles 'sorry' for slapping Shinsuke Nakamura, Asuka taps Carmella and Money in the Bank is heating up on SmackDown Live Here are five things we learnt from the “go-home” SmackDown last night. 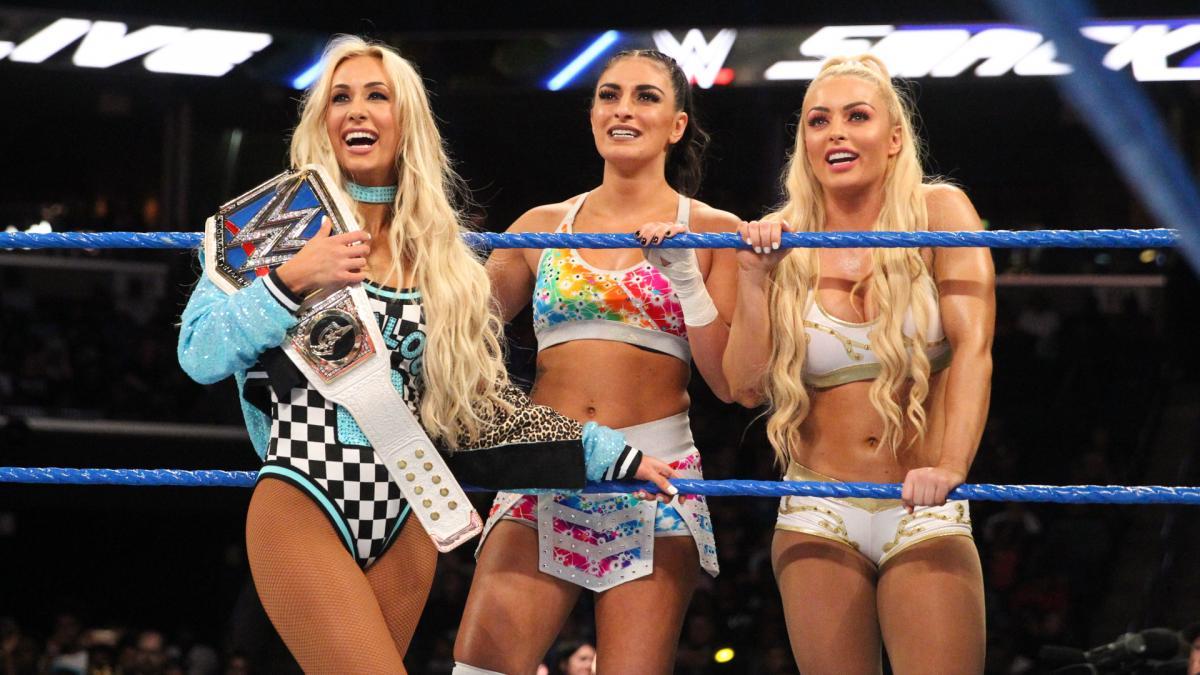 SmackDown opened like Raw, with the competitors of the women’s MITB match – Charlotte, Becky Lynch, Naomi and Lana – stood in the ring bickering about who will win.

The IIconics came down to trash talk, followed by and Sonya Deville and Mandy Rose, leading to an inevitable multi-woman tag match later in the show.

SmackDown Women’s Champion Carmella and her MITB opponent Asuka were later added to make it a 10-woman tag.

To the surprise of no one, Asuka got the win when she caught Carmella in the Asuka Lock. But can she do the same this Sunday?

Yawn. We’ve seen this booking formula before, WWE. Just one day before, in fact, when Ronda Rousey trapped Nia Jax in the arm bar. It’s so formulaic it’s embarrassing to watch. 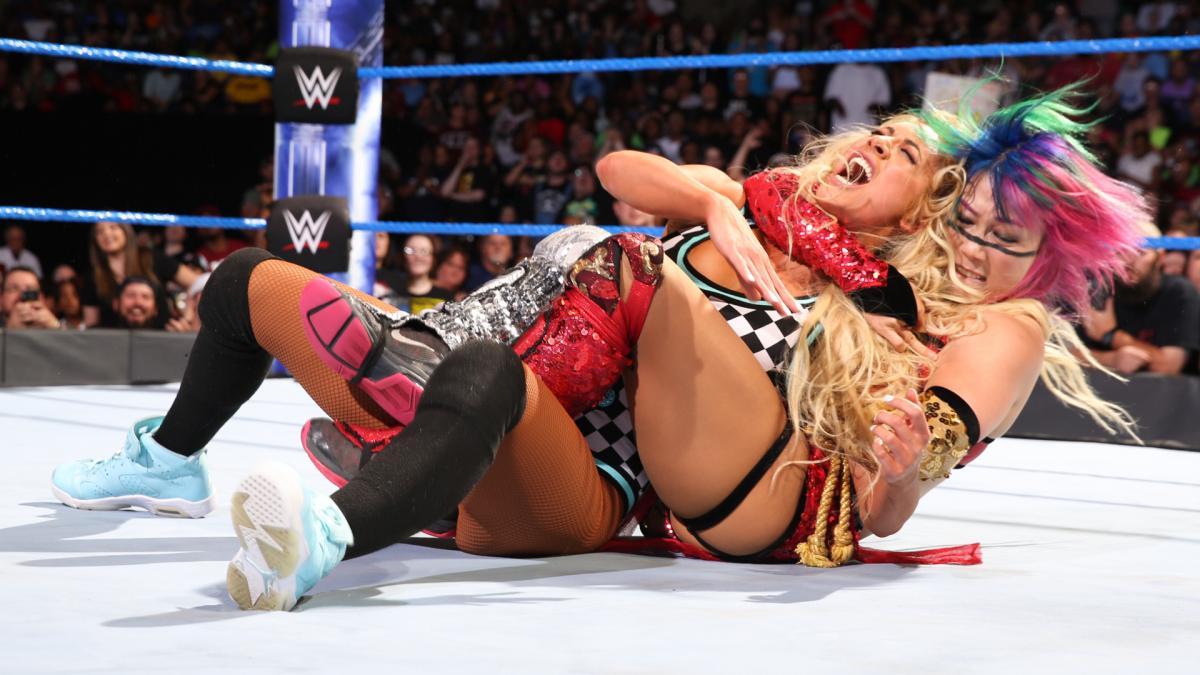 Miz wanted to practice his acting skills by playing a referee last night, so Paige made him guest ref in a match between fellow MITB competitors Samoa Joe and Rusev.

During the match, Joe (sporting a new Mohican hairdo) accidentally charged and squashed Miz in the corner – so Miz refused to count when Joe made a cover on Rusev.

HARD TIMES WWE superstar and US Champion Jeff Hardy, 40, pleads guilty to drink driving after breathalyser reveals he was three times over the legal limit

As Joe argued with Miz, Rusev blindsided Joe with a Machka Kick for the win. But Rusev’s victory was short-lived.

Miz hit Rusev with a sneaky Skull-Crushing Finale, then pulled out a ladder and grabbed a MITB briefcase above the ring (which was not-so-hilariously filled with New Day’s pancakes).

Miz might have had the final word last night, but Samoa Joe will be after revenge in the MITB ladder match this Sunday. 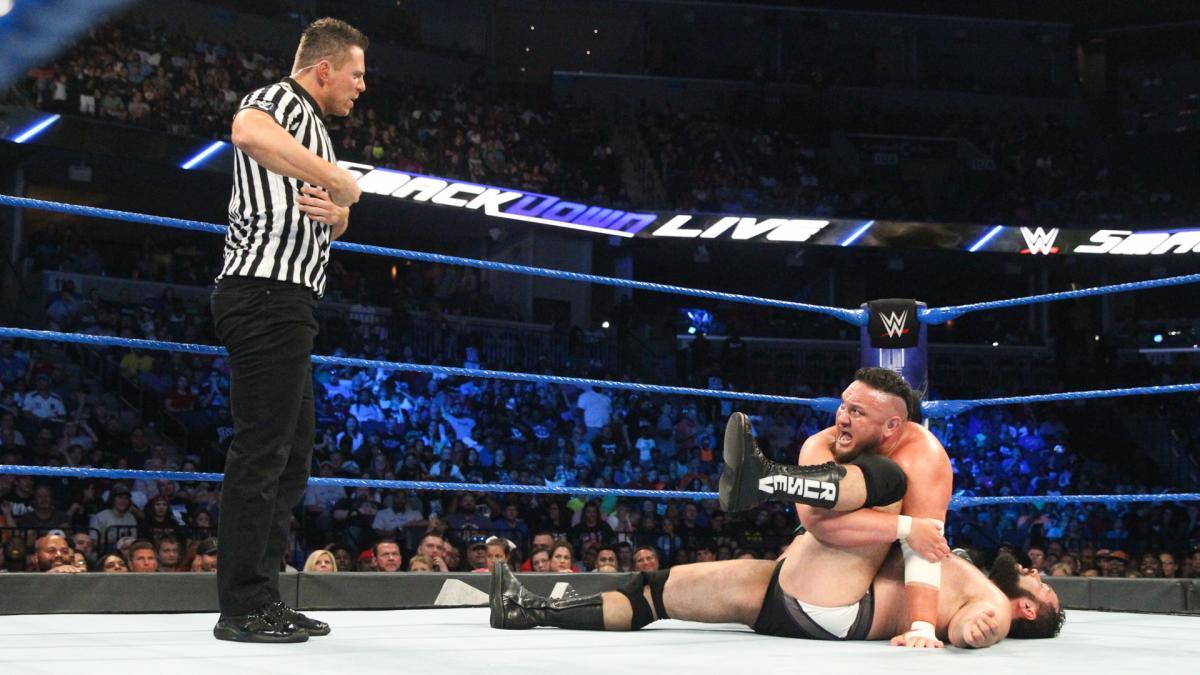 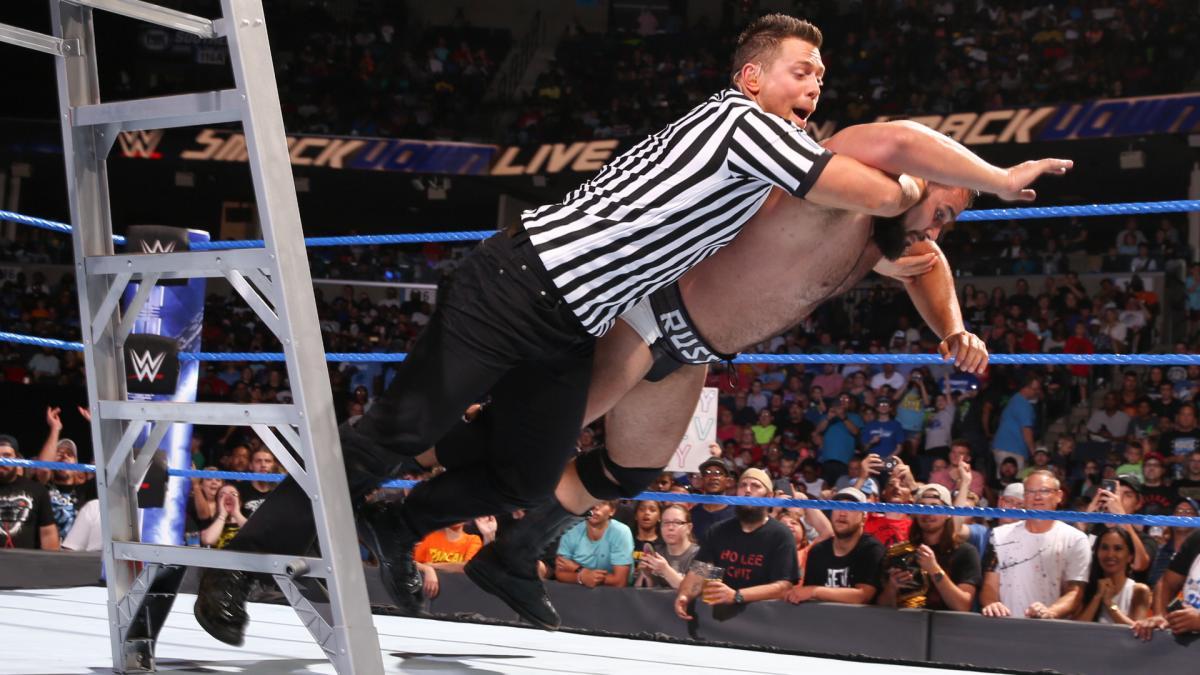 Jeff Hardy is down for the count

It’s been a bad week for US Champion Jeff Hardy. First he pleaded guilty to DWI, now he’s taken a devastating low blow from Nakamura in a non-title match.

It looked like Hardy had Nak beat when he landed the Swanton Bomb, but a storyline back injury stopped Hardy making the cover.

Shinsuke then walloped Hardy with a low blow, earning himself a DQ.

But Nak counted Hardy down for 10 – sending a message to AJ Styles about their Last Man Standing match this Sunday.

Hardy hasn’t done much since winning the US title. In fact, he’s not even on the card at Money in the Bank. Remember the days when he was WWE’s top babyface? 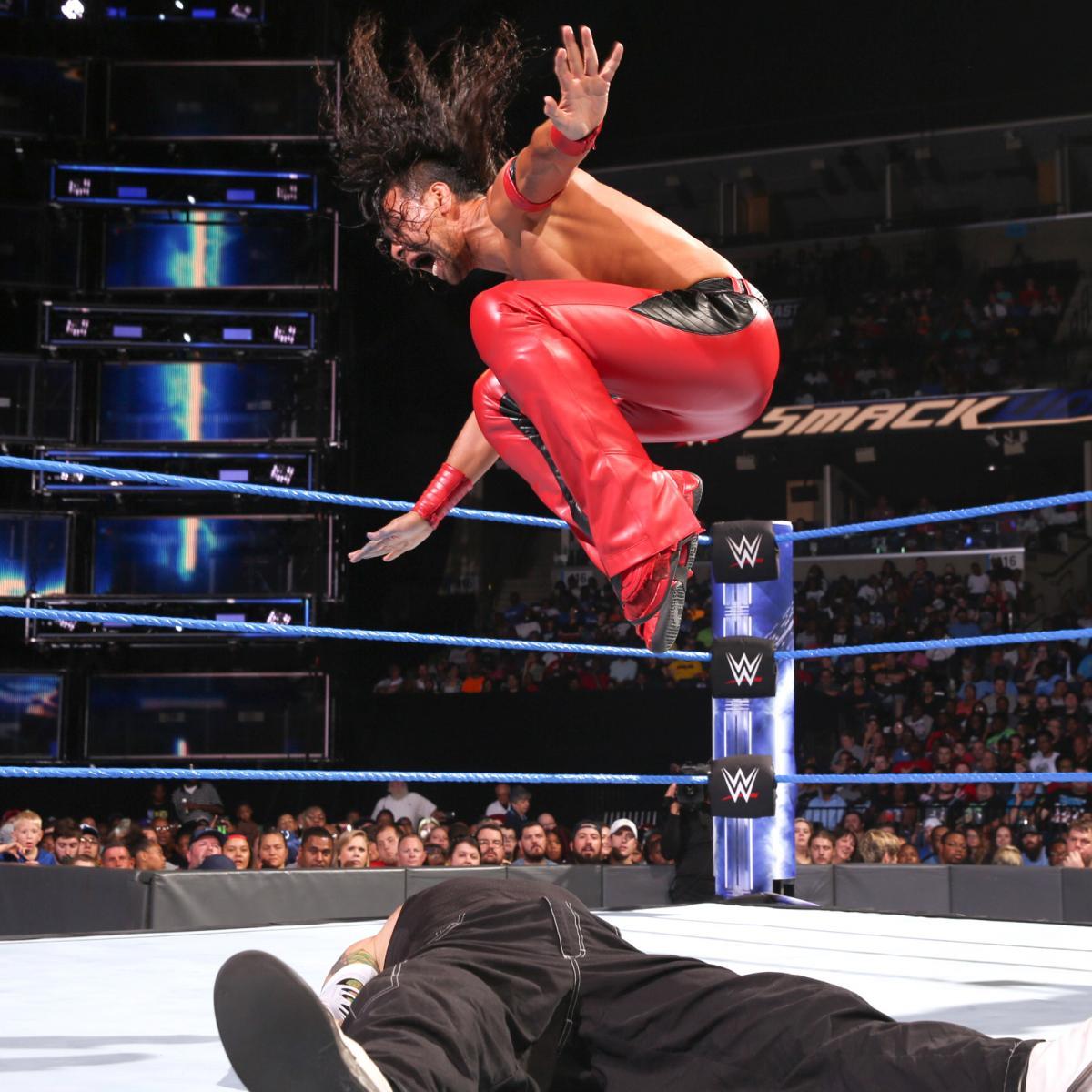 Another week, another Big Cass promo blathering on about how much taller he is than Daniel Bryan.

He obviously has some sort of complex about size – or whoever’s writing the promos does (right, Vince?).

This time Cass regaled us with a story about going to the funfair – but Bryan was too short to go on the rides. Seriously WWE, is this enough to sell the feud between Cass and Bryan?

Bryan’s attack on Cass a few weeks back was heated and realistic – the big man vs small man promos since have cut the legs out from under the storyline.

Bryan at least looked good last night with a win over Shelton Benjamin in a decent matchup. 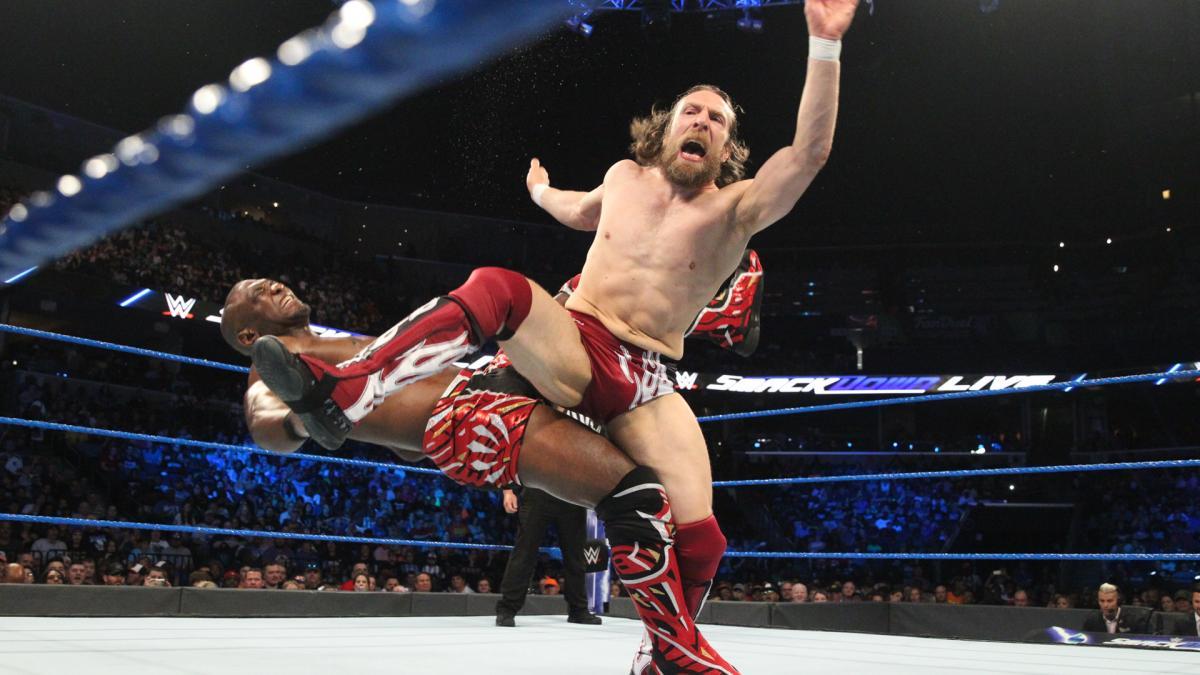 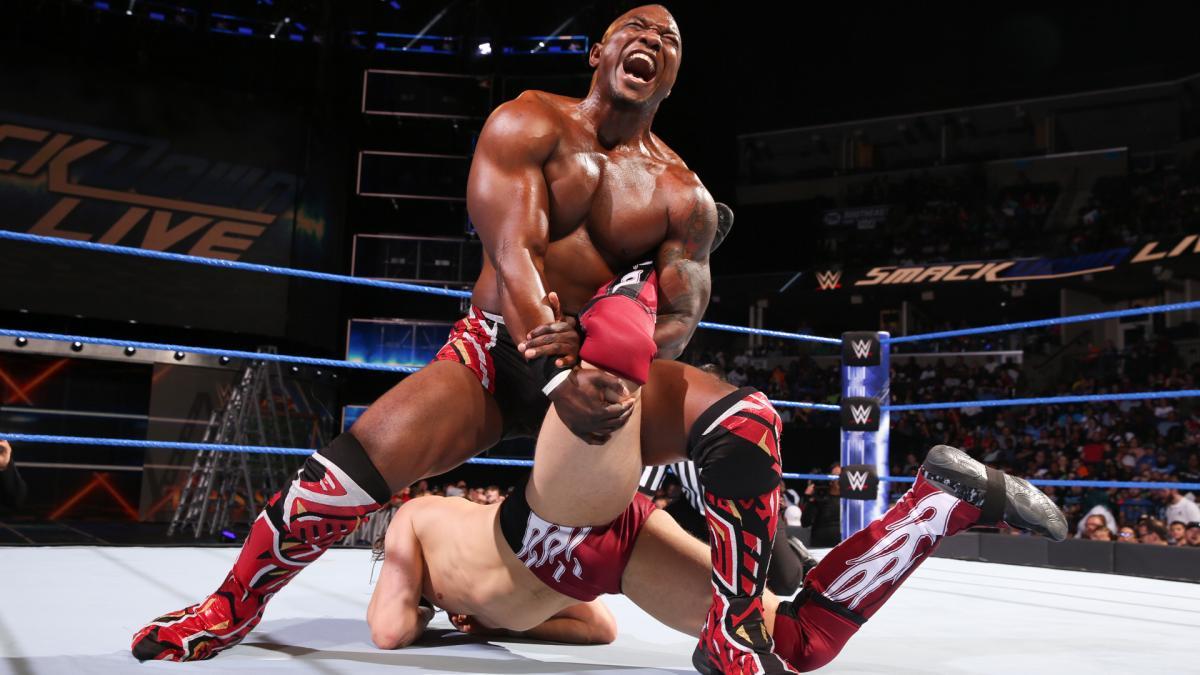 AJ Styles is sorry for slapping Nakamura (not really)

AJ did an interview with Jerry Lawler – who was decked out his old Attitude Era gear – about the contract signing last week, when Styles slapped Nakamura.

Styles said: “I’m sorry… sorry I didn’t knock his head off with my fist!” The line was as corny as AJ’s fake guffawing at Lawler’s line about slapping Andy Kauffman.

(There’s a pop culture reference that’s only 36 years out of date.)

AJ might be the best wrestler in the world, but he murders these scripted promos.

Still, we can’t help but be excited for the final showdown between AJ and Nakamura this Sunday – if only to see where the WWE Championship goes from here.

Will Nakamura become WWE Champion? And if not, who will be AJ’s next challenger? Or will the MITB briefcase winner cash in that night?