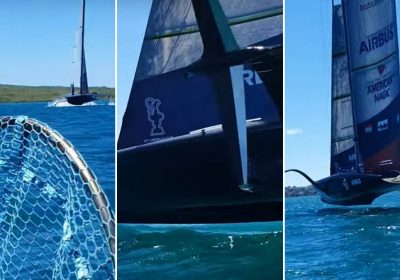 American Magic’s entry to the America’s Cup has been captured racing just metres past a small fishing vessel in the Hauraki Gulf, sending the man in it scrambling for cover.

In a video posted to YouTube on Friday named “American Magic close call”, the team’s boat Patriot can be seen moving towards the man who appears to filming on a jet ski from around 100 metres away.

As the giant AC75 races closer, the jet ski’s driver can be heard in the video saying “Here we go” in apparent anticipation of a great view of the impressive boat.

However, just seconds later, as the size and speed and proximity of Patriot becomes apparent to the man, he quickly changes his tone.

“Far out, f**k this,” he says as he appears to move himself into a more bracing position on his vessel.

When the camera stabilises once again, Patriot sails past at what appears to be racing pace and within around 10 metres of the man, humming all the while as its foils carve through the water.

American Magic CEO Terry Hutchinson told NZME’s Matt Brown that he hadn’t seen footage of the incident and no report had been made to the crew about any close calls.

“Firstly, I haven’t seen any video… but I know the last day that we sailed, we sailed in the harbour – Ineos and Luna Rossa were out sailing in the harbour as well – and people were out enjoying their days.

“There’s a couple of channel markers laid around North Head and along the city-front side for smaller boats to go and enjoy their days while we’re enjoying ours so there’s nothing that has stood out to me as even marginally close.”

Hutchinson explained that there was a thorough set of protocols put in place to protect both his crew and the boating community.

“The obvious thing is when we go off the dock every day we inform the harbour master and the local authorities where we’re sailing, how many people we have on the water and the precautions that we have in place if we had an accident on the water; where the extraction points are and so everything is very well thought out and very prepared a worst-case scenario.

It’s not clear whether the jet ski in question had strayed into an area of the harbour outside of that marked for smaller vessels, but Hutchinson said it had been common for America’s Cup fans to try to get as close as possible to the AC75s over the past months, mostly to show support to the teams.

Auckland’s maritime rules explain that all vessels must not exceed a speed of 5 knots (a fast walking speed) if within 50m of any other boat and while the boating community has been alerted that AC75 boats are training within the harbour this summer, they receive no special privileges when it comes to collision prevention.

Hutchinson went on to explain that the boatie in question did exactly what the team recommends if an AC75 approaches your vessel on the water.

Hutchinson also outlined the fact that the area the America’s Cup boats are training within is set out clearly within the harbour and patrolled by support boats.

“In general, boaters should know that we do not recommend going between our bright orange training buoys as we approach them.

“Our safety boats and internal radio communications are there to ensure our safety and the safety of the boats we are fortunate to share the harbour with.”

The jet skier’s video was discovered and re-posted to the online sailing community sailinganarchy.com where one user noted that Patriot lived up to the reputation of one if its main sponsors.

“That sound, like a true Airbus,” user Matagi posted on Saturday.

American Magic is preparing for the Prada Cup which begins next Friday during which they will face off with Luna Rossa and Ineos Team UK for the right to challenge Team New Zealand for America’s Cup itself.

All teams will race each other four times in a round-robin format this month. The team with the most wins will progress immediately into the Prada Cup final, while the remaining two teams contest a best-of-seven races semifinal.

The loser of the semifinals sees the end of their campaign while the winner enters the final in a best-of-13 races series to see who takes on Team New Zealand in America’s Cup.

A spokesperson for Auckland Transport referred queries on water safety issues around the America’s Cup to event organisers.

Enjoy smooth sailing to the Cup with Auckland Transport

• Avoid traffic congestion and parking niggles and download the AT Mobile app to plot your bus, train or ferry ride to race venues before you leave home.

• Make sure your AT HOP card is in your pocket. It’s the best way to ride to the Cup