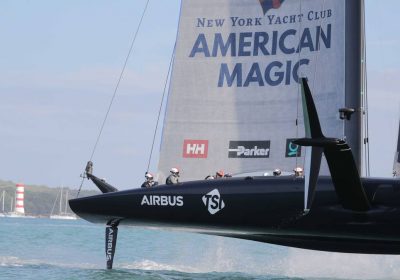 The commodore of the New York Yacht Club has slammed the idea of a one-off match between Team New Zealand and Ineos Team UK, calling the suggestion a “huge step in the wrong direction”.

Rumours have been rife about a Deed of Gift match between the defender and new Challenger of Record, which could take place as early as next year in the Isle of Wight where the Auld Mug was first contested in 1851.

In a statement, Commodore Christopher J Culver said the New York Yacht Club would not support that decision as it excludes other entries.

“The two previous Deed of Gift matches, in 1988 and 2010, were distinct low points in the history of the America’s Cup,” Culver said.

“Regardless of the conditions, the New York Yacht Club will not support a Deed of Gift match or an America’s Cup competition that, due to the schedule and rules for competition, is effectively open to only the defender and Challenger of Record.

“The AC75 is a remarkable boat that will only produce closer and more exciting competition in future cycles. As the world emerges from the Covid-19 pandemic, there will be a thirst for the fusion of competition, tradition and social interaction that the America’s Cup can provide like no other sporting event.

“With the right schedule and match conditions, there is every expectation we would see a competition to rival Perth in 1987, Auckland in 2003 and Valencia in 2007.

“Each of those America’s Cup cycles drew 10 or more teams to compete for the Auld Mug and the significant commercial interest necessary to support such a grand event. To waste this confluence of opportunity on a two-team event, to potentially once again plunge the competition into the New York State Courts, is not in the best interests of the America’s Cup or the sport of sailing.”

Entry numbers were a point of criticism of the 36th America’s Cup, as only three challengers were able to fund their campaigns to a point where they made the starting line in Auckland; Ineos Team UK, Luna Rossa and the New York Yacht Club’s American Magic. Three others were forced to withdraw.

For the New York Yacht Club, who have successfully defended the Auld Mug 25 times in its history, the 2021 campaign saw their return to the America’s Cup for the first time since the 2003 regatta. The club has alluded to its hope of mounting another challenge, if they get the opportunity to do so.