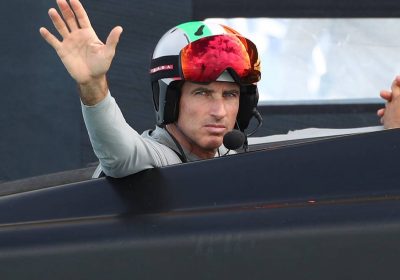 That’s the strong verdict of Luna Rossa co-helmsman Francesco Bruni, in response to speculation that the next America’s Cup defence could be hosted overseas.

As first reported by the Herald, there is believed to be a proposal on the table for a one-off Deed of Gift match in England next year with Ineos Team UK, who were confirmed as the Challenger of Record on Wednesday.

There is another the possibility of a more orthodox Cup regatta, but hosted overseas, but both those scenarios were unfathomable to Bruni.

“I really hope the Cup stays in New Zealand,” Bruni told the Herald. “I heard some bad rumours about the Cup going to England and I really hope that doesn’t happen.

“It would be such a shame. I really cannot think about another place to come and challenge for the Cup, rather than here. The Cup deserves New Zealand, and New Zealand deserves the Cup.”

Bruni also warned that Luna Rossa would be a much stronger adversary the next time round, should they get the chance to compete for the Auld Mug again.

That’s because of the huge lessons from this regatta. The Italians have a long history in the Cup, but came into this campaign behind the curve, after missing the Bermuda stage four years ago and taking a secondary role in San Francisco in 2013.

“It’s massive,” said Bruni of the template forged. “There is a reason why the Kiwis are so strong. They take a lot of heritage of what they have done in past campaigns and there has been a lot of continuity on their team.”

Though they were defeated, the 2021 edition of Luna Rossa etched their name in history.

They will be remembered as one of the best challengers for the Auld Mug, alongside Team New Zealand in 2013.

The Italians faced probably the most experienced team in Cup history and one of the most technologically advanced boats ever seen. But they didn’t blink.

Luna Rossa won six out of 10 starts and were agonisingly close to at least two more race victories, despite being unable to match the pure speed of Te Rehutai.

Like Bjorn Borg and John McEnroe, or Roger Federer and Rafa Nadal, they brought out the best in their rivals, pushing Team New Zealand to unprecedented heights.

“They had the faster package, their boat was simply faster,” conceded Luna Rossa skipper Max Sirena. “I cannot regret anything on the sailing team, they sailed it super well. They probably did less mistakes [than Team New Zealand] but in the end the fastest boat forgives everything.”

Though Bruni was clearly devastated by the final 7-3 result, he had some cherished memories.

“[The best moments were] the races that we won and definitely when we went 3-2 up,” said Bruni. “That was a special moment, leading the America’s Cup was something, really something. It’s tough now, but we bring with us a lot of good memories and a great experience here in New Zealand.

“It’s a great thing for Italy and for Luna Rossa. A good friend of mine told me that it is the first time in the history of the America’s Cup that there is a second. That is a good one and I loved it.”