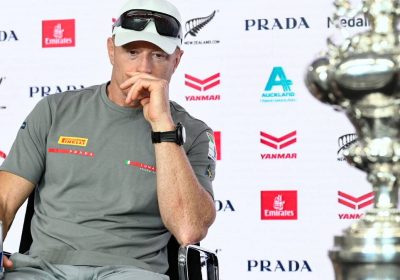 The Secret Sailor is an internationally-acclaimed yachtie with a strong history in the America’s Cup.

The America’s Cup is over and the outcome – though not at all unexpected – was a good one for New Zealand, the team and the country.

You would struggle to find better pictures than the vistas beamed all over the globe and after being inconsistent in the first handful of races, Team New Zealand finally hit their straps.

But, if you look more closely closer at the regatta as a whole, I don’t think it lived up to its billing.

The boats never really got going despite the promise of speeds in the high 50 knots. The starts were a lottery and the size of the race courses made it near impossible for boats to pass each other – at least until the final few races.

Luna Rossa deserve credit for the way they scrapped. When the boat designs were first unveiled, the challengers all knew they wouldn’t get close to the Kiwis. In the Cup Match Luna Rossa were clearly in an inferior boat and helmsmen Jimmy Spithill and Francesco Bruni did everything possible to get the edge – in fact, I reckon they sailed the pants off Team New Zealand, who relied on their greater boat speed.

Team NZ’s next move will be interesting – even after today’s confirmation of the Herald report on Tuesday that the Royal Yacht Squadron in the UK will be the new Challenger of Record.

With all the talk of a one-off regatta against Ineos Team UK next year, Team NZ would effectively be selling a regatta to British moneybags Jim Ratcliffe – and once you’re prepared to do that, there’s no guarantee that the Cup would ever come back to New Zealand.

It is time for the Royal New Zealand Yacht Squadron to stand up. The teams might be run by billionaire owners but the yacht club remains the most powerful player as they have the final say in when and where the next Cup is held.

In the past the RNZYS has been accused of merely rubber-stamping whatever Grant Dalton decides but I can see them taking a tough stance on this.

Shutting out the other challengers – like American Magic and Luna Rossa – would also fly in the spirit of the Cup and getting more teams involved. As impressive as these AC75s are, no one will care to watch them fly if you’re sailing by yourself.

I do have some sympathy for Dalton – it’s no easy task putting the money together for a campaign like this and he will no doubt be concerned about sponsors and crew members’ contracts running out soon. There’s been plenty of turmoil for him to deal with over the last year or so, and I wouldn’t be at all surprised if he got sick of it.

If I were Dalton, I would be extremely concerned about one member of the team in particular: Dan Bernasconi.

The Team NZ design boss heads a team of some 35 designers and is the unsung hero of New Zealand’s Cup success. He’s had an incredibly successful career – long before he even joined Team NZ – and you bet he (and his invaluable IP) would be on the radar of many challengers.

The decision to introduce stricter nationality regulations in the next Cup doesn’t make much sense to me. Not only will it rule out many talented young Kiwi sailors from ever lining up in the event – but it is also not impossible to get around.

The America’s Cup is all about money – and if teams are able to spend hundreds of millions of dollars on fielding an entry, then buying a sailor residence of a certain country is little more than chump change for the likes of Ratcliffe and Co.