America’s Cup 2021: Where dreams die hard – Inside the last days of American Magic 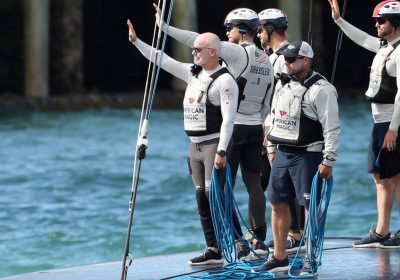 Over the past week Sean Clarkson has said more than 100 goodbyes.

The American Magic grinder has been farewelling teammates since last Monday, when some of the Europeans on the syndicate left the base to make their long way home.

By Friday there were only a handful of people left, as Patriot was dismantled and put into storage.

Originally from Kerikeri, Clarkson is a veteran of the America’s Cup game, with seven previous campaigns since his first outing with the New Zealand Challenge in 1992, but the termination of this one has hit hard.

“It’s brutal but that’s the way it is and that’s the way it has always been,” Clarkson told the Herald. “When you sign up to a contract, you know the terms. But the reality of it all is a bit overwhelming. You are not quite ready for it.

“There are people you have spent 13 hours a day, seven days a week for the last two or three years and you are not going to see them again. You form quite a tight bond, you enjoy being together and everyone just goes.”

Like many within the American Magic fold, Clarkson is in slight disbelief at how quickly everything unravelled.

They were sitting pretty after December’s America’s Cup World Series – clearly ahead of the other challengers – but packing their bags six weeks later, after the 4-0 Prada Cup semifinal defeat to Luna Rossa.

“It sucks,” says Clarkson. “I genuinely believed we had a bloody good chance of lifting the Cup, and I don’t think I was the only one. I think the opposition felt that, Team New Zealand felt that. It was definitely a massive shock. Holy shit, what happened?

“We did so many things so well and it felt like we deserved a bit better. But the nature of the game is brutal. It’s hard to explain the turnaround from feeling happy with our direction, to it going inside out so quickly. It’s amazing how teams can catch up.”

As well as their failure to keep ahead of the development curve, Patriot’s capsize was the obvious “tipping point” for Clarkson. They lost sailing time and confidence in the boat and equipment, and were “one gremlin away from things going bad.”

It was all a bridge too far, as the restored American Magic boat couldn’t compete.

Clarkson was on the chase boat on the fateful afternoon three weeks ago, when Patriot capsized following a huge gust.

Clarkson is no wide-eyed novice – “when you have been in sailing for a long time you have seen some shit. I’ve been involved in plenty of boats in the ocean when rudders fall out and hulls cave in” – but was astounded by the collective effort.

“It was an amazing few hours,” said Clarkson. “The response from the other teams, the emergency services. [There were a] lot of people running round but everyone did the right thing.”

Clarkson’s Cup career started in 1991, selected from Royal New Zealand Yacht Squadron’s youth scheme to be the one of the “shit kickers for the race guys” on NZL20. Clarkson was in his final year of a marine biology degree, but didn’t hesitate.

“I was a starry-eyed kid,” reflects Clarkson. “It taught you a lot about hard work and luck. I was lucky that Sir Peter Blake had the balls to say, ‘let’s put a 21-year-old on a race boat’.

“Pretty happy days. Being paid $15,000 and living the dream. I never made it back to university though.”

His next campaign was with Tag Heuer, the alternative Kiwi challenge in 1995.

“It was a shoestring campaign that overdelivered for what we had,” says Clarkson. “We should have taken the Australians out in the semifinals, but made one tactical error. Team New Zealand would have destroyed us, but it would have been a wonderful story.”

Clarkson competed in the glory days of the Whitbread Round the World Race, with a stack of stories from New Zealand Endeavour (1993-94) and Toshiba (1997-98). He sailed at the 1996 Olympics and has won multiple world championships in different classes.

“Hard work pays off,” says the 52-year-old, explaining how he has stayed in the game.
“I’m not very good politically, I don’t market myself very well. Some people have the gift of the gab, sell themselves. I have got none of that, but’s it nice to see if you work hard you can make a career out of it.”

It’s made his family (wife Shawn and teenage sons Finn and Felix) “quite nomadic” with spells across the globe.

So what about another Cup challenge?

“If I could find a role [where] I was contributing to the team,” says Clarkson. “Not just to do it, but if I could contribute. I love the intensity, the learning, the people. Everyone is like ‘you should retire and go and sail super yachts’, but no way.”

Clarkson’s next step is less certain, as he waits for the post Covid-19 resumption of the professional sailing circuit.

“I’ll hang out here for a while,” explains Clarkson. “All the work we would all roll into normally has been cancelled, so it is a bit of a scary time for a lot of us. But that’s the way it is.”