AMIR KHAN has teased a potential bout against Oscar De La Hoya as he called out the boxing legend on social media. 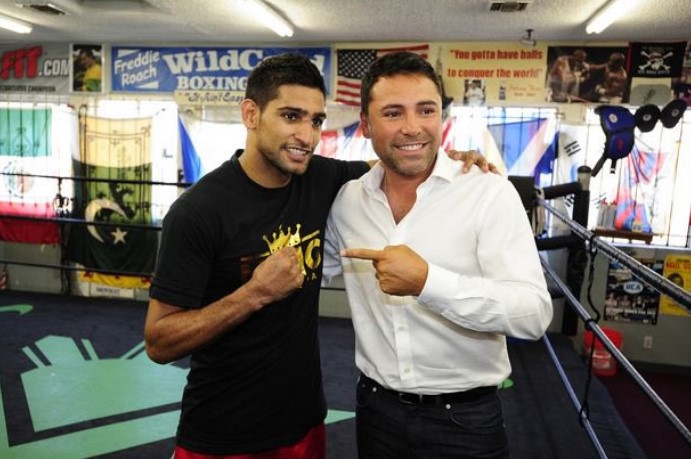 Captioning the old image of the pair together, the British star said: "I heard @OscarDeLaHoya is thinking of making a comeback.

Fans were quick to poke fun at the potential match-up, as one quipped: "Fight @SpecialKBrook if you want to make a name for yourself."

Another said: "Come on, dude. Are you serious? Calling out someone that retired 11 years ago?"

A third added: "Bro he will still knock you out, don't even think about it."

De La Hoya hung up his gloves in April 2009 following his December 2008 defeat at the hands of Manny Pacquiao.

But the Golden Boy – who won 11 world titles in six weight classes – revealed in June he is considering returning to the ring.

And he failed to rule out a blockbuster bout against Mexican legend Saul Alvarez, while Conor McGregor is also another potential option.

The 39-6 boxer is known to be a huge fan of Khan's talents, having lauded his bravery, speed and footwork before his 2016 clash against Canelo.

Speaking at the time, De La Hoya said: "He's a fighter who throws a lot of combinations. He's a fast fighter, he has great footwork.

"But one thing about Amir Khan is he's sometimes a little too brave for his own good. People might say that that's been his Achilles' heel.

"That's been his downfall in some of the fights he's been involved in."