Home » Sport » Are the Giants and Jets Watchable Yet?

Are the Giants and Jets Watchable Yet? 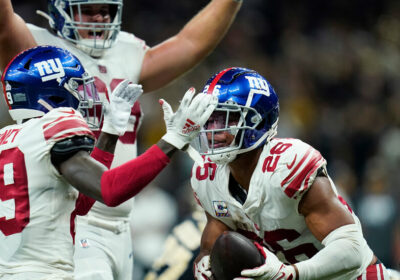 This season, we’ve enlisted two experts — one familiar with the ins and outs of New York’s football teams, the other a nationally focused football analyst — to answer an essential question as a service to readers: Are these teams good yet?

Devin Gordon, who has written about sports for ESPN and GQ and is the author of “So Many Ways to Lose: The Amazin’ True Story of the New York Mets, the Best Worst Team in Sports,” observed both the Giants and the Jets from a locally focused perspective.

The Giants rallied to beat the New Orleans Saints, 27-21, in overtime.

Folks, we have a watchable football team: The Giants are officially worth your viewing attention. Look, the Giants (1-3) still aren’t good, to be clear, but they are no longer winless. Deep into the fourth quarter of Sunday’s game against the Saints, one of the N.F.L.’s better teams, playing in their emotional post-Hurricane Ida return to the Superdome, a pattern appeared to be repeating itself. Freewheeling quarterback Daniel Jones was making the occasional spectacular play, running back Saquon Barkley was tantalizing the audience with flashes of his pre-injury self, and the Giants were making a game of it. All that remained was for the Giants to lose in heartbreaking fashion, presumably on a last-second field goal, like in the previous two weeks.

Instead, Jones and Barkley gave fans a glimpse of the playoff-caliber team the Giants might soon become (but definitely aren’t yet), winning in overtime on Barkley’s second touchdown gallop of the game. His first score, a 54-yard dump-and-run from Jones, brought the Giants within 3 points after the ensuing 2-point conversion late in the fourth quarter. Barkley’s second, on the opening drive of overtime, gave the Giants their first victory of the season.

In New Orleans’s new world without Drew Brees, their offense has suddenly grown stagnant. It’s a three-prong plan: Feed Alvin Kamara, toss in some dashes of Taysom Hill, and forbid Jameis Winston from doing anything complicated. For three and a half quarters, the strategy worked. But when the Saints needed a first down, they couldn’t manufacture one. And the young frisky funnible Giants? All of a sudden, they’re the ones who can score from anywhere.

Verdict: Get on the bandwagon early!

Finally, there’s evidence of a pulse fluttering about in the chest of the Football Giants.

In their first win of the season, the Giants managed legitimate scoring drives, winning in overtime when Saquon Barkley fought through contact for a 6-yard touchdown run following a huge 23-yard pass to Kenny Golladay on a third down play.

Daniel Jones looked exactly like a quarterback in a contract year, repeatedly pushing the ball downfield when he saw one-on-one coverage. He finished on Sunday with the first 400-yard passing performance of his career, and he spread the wealth in spite of receivers Darius Slayton and Sterling Shepard being out: Four Giants had more than 70 yards receiving.

Jones filled the stat sheet, but more important to the Giants’ future, Barkley looked like the playmaker of old. Barkley has been desperate to again make explosive plays that decide games and, to set him up, offensive coordinator Jason Garrett got Barkley the ball as far away from the box as possible. Barkley’s 54-yard third quarter touchdown came as a receiver in an empty formation, and he scored again on a key run after the catch in overtime on a screen play.

Four weeks in, we can firmly conclude that the defense won’t be what it was in 2020. The Giants surrendered 400 yards of offense to a Saints offense missing many of its most explosive players. The bend-don’t-break approach was enough on Sunday but can’t generate enough pressure on opposing quarterbacks to mount a sustained challenge. The real test is next week against the Dallas Cowboys’ explosive passing game.

Verdict: We’ll know for sure next week.

The Jets fought off the Tennessee Titans to win, 27-24, in overtime.

It must be fun to root for Derrick Henry, the N.F.L.’s best running back, because it sure is demoralizing to root against him. He plays this trick in the early going, luring us into a false sense of satisfaction. Look, it’s almost halftime and he’s only got 39 yards! He might even get stuffed at the line of scrimmage once or twice. It was easy to think the Jets might be doing well.

Silly goose. Henry, who rushed for 2,027 yards last season, is a heavyweight fighter working the body, and by the fourth quarter the opposing defense’s gut is mush. N.F.L. wonks often say that Henry gets stronger as the game goes on, but it’s more the defense that gets weaker, and then steam-rolled. On Sunday at MetLife Stadium, Henry crossed the 100-yard mark on his first carry of the fourth quarter, then bullrushed his way into the end zone to put the Titans ahead, 17-10. End of story, right?

With Titans receivers Julio Jones and A.J. Brown out, the Jets could be certain of the entirety of the Titans’ playbook — Derrick Henry, Derrick Henry, Derrick Henry. The Titans had a similar advantage: The Jets’ only weapon is their rookie quarterback Zach Wilson’s rocket right arm. After a first half in which Wilson failed to lead the Jets on a touchdown drive for the fourth straight game, he connected twice for 50-plus yard passes on rollouts to his right, including a 53-yarder to Corey Davis to put the Jets in front, 24-17, late in the fourth quarter.

Finally, the Jets figured out how to slow down Henry: grab a lead, and force the Titans to throw. Up by a field goal with two minutes remaining in overtime, the Jets almost seemed to give up on Henry and play the clock. Could time expire before Henry got into the end zone? Yes. Henry got the Titans close enough for a game-tying field goal, but kicker Randy Bullock missed it. The Jets got their first win, and even better, they don’t have to tackle Derrick Henry anymore.

After three weeks of counting moral victories and nursing wounded egos, the Jets have something tangible to celebrate — a win.

The young team put together a fourth-quarter performance beyond their years and then outlasted the Tennessee Titans in overtime. The Jets converted three different third-down attempts on their final drive to get into range for a successful 22-yard field-goal attempt.

After seeing tough defenses in three consecutive games, rookie Zach Wilson was finally able to work through his progressions against the Titans. Offensive coordinator Mike LaFleur didn’t ask Wilson to be a world-beater, but when the offense needed to take a shot, tied 17-17 midway through the fourth quarter, Wilson delivered with a 53-yard touchdown pass to Corey Davis to take the lead.

Wilson will still need to improve his decision making down the field, whether pass rushers are chasing him down or not. Wilson’s lone interception, his eighth this season, came on a pass to a receiver who wasn’t open, a sign that he’s probably too comfortable pushing things. Without much of a running game to set up play-action passes, and a receiving corps that cannot win against tight coverage play after play, the Jets’ best hope on offense is to be good enough. Against the Atlanta Falcons next week, Wilson and company just might be.