Aroldis Chapman may have just burned down Yankees season 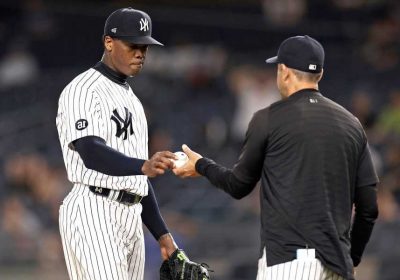 Kevin Durant's Olympics decision isn't as crazy as it seems

Aroldis Chapman took the mound inside Yankee Stadium on the other side of midnight, with dramatic visuals of fireballs exploding around him on the big center field board. Chapman is rightfully advertised as a flamethrower, which was never more fitting than it was early Thursday morning, when he might have burned down the petrified remains of this Yankees season.

As a six-time All-Star with 292 career saves to his name, Chapman was charged to protect an 8-4 lead. It was not a difficult ask, even if two lengthy rain delays made it feel like this game had started last Friday. This was a two-foot putt, and the opponent was ready to concede. The Angels were anxious to get back to their hotel to grab a few hours of sleep before returning to the Stadium for the series-ending matinee.

Truth is, this game was over in the first inning. The Angels knew it, the Yankees knew it, and every man, woman and child in the stands knew it. The Yankees knocked out the sport’s reigning freak of nature, Shohei Ohtani, before he could even record three outs, tagging him for seven runs.

The rest was supposed to be a formality. In fact, it seemed certain during the second rain delay of 91 minutes that the umps would call it a night. But they never did. They kept the Angels in the ballpark and, as it turned out, right in the game. Chapman got the ball in the ninth, and proceeded to show his employers that this team had not even come close to hitting rock bottom.

The closer walked three of the first four batters he faced, and then threw ball one to Jared Walsh. Chapman looked like a man who didn’t believe in himself, and for good reason: His ERA had gone from 0.00 to 2.54 in his previous dozen appearances, punctuated by his poor showing against Kansas City last week.

Now he had to give Walsh something to hit, and hit the damn thing Walsh did. It was an 84-mph slider that went sailing into the dark night, while the diehards in the diminished crowd gasped in horror. Chapman had just surrendered the first grand slam of his distinguished career, at the worst possible time. Lucas Luetge tried and failed to bail him out, and the Angels stole an 11-8 victory that stands as perhaps the most devastating regular-season defeat of Aaron Boone’s managerial career.

“I feel terrible for [the fans],” Boone said. “They deserve better than this.”

Yes they most certainly do.

Boone called the loss terrible, frustrating, disappointing, and said the franchise shared in the fan base’s pain. But the manager made it clear that this was not the time for yet another sitdown with his beleaguered team.

“We’ve spoken a ton,” Boone sniped. “Everyone’s said everything they needed to. The guys have spoken to one another. Talk is cheap right now. We need to go out and play full games and start hammering people.”

The Yankees don’t look capable of hammering anything right now, other than the final nail in their own coffin.

“We’ve got to pick this sh-t up, that’s it,” Giancarlo Stanton said.

Just the other day, GM Brian Cashman said the Yankees “suck right now.” He said that his product “stinks to high heavens.”

Have you ever met another general manager who would say those words in a confessional booth, never mind during an impromptu media session in the nation’s most volatile market?

On Wednesday, Cashman told The Post that during troubled times, he would fight for Boone publicly just like he fought for Joe Torre and Joe Girardi.

“The easier thing to do is create sacrificial lambs to appease the masses,” Cashman said. “The harder thing is to push back on that narrative and recognize our sport is very difficult, and things don’t play out as you plan many times. Now, you’ve got to speak the truth. We are what we are, and you have to own it.”

The $201 million Yankees have no choice but to own this latest unmitigated disaster. Above all, Chapman has to own it, just like he had to own Jose Altuve’s walk-off homer in the ALCS. His ERA over his last 13 appearances is now north of 6.00. He spoke early Thursday morning about a fastball command that has deserted him. He said through an interpreter that he needed to “find myself again with that pitch, and come back to be the Chapman that started the season.”

Problem is, it might already be too late. Boone said the season was on the brink, and this is how his team responded. If the Yankees still had a chance to salvage something, it felt like their flamethrower just burned it down.