ARSENAL have completed the signing of youngster George Lewis from Norwegian side Tromso IL.

The 20-year-old winger will team up with the Gunners' Under-23 squad for the upcoming campaign. 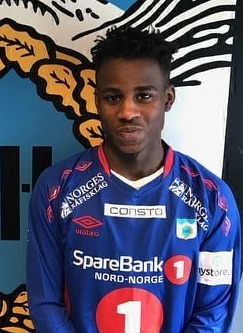 It is believed he has penned an initial two-year deal at the Emirates.

An Arsenal scout had spotted his talent in Norway during spells at Tromso IL, Tromsdalen and Fram Larvik.

Lewis, renowned for his pace and trickery, was born in Rwanda and had previously earned the interest of Bournemouth.

According to Arseblog, Arsenal's interest emerged after he played an a local tournament in January.

He was quoted saying: "After the iTromsø Cup, I suddenly got a message that Arsenal is interested in me.

"In the beginning, I didn’t believe it, but after a while I realised the interest was real.

“My agent (Arfan Rehman) lives in England so he had been in touch with a lot of English clubs, so I knew there was some interest when Arsenal had seen the tournament and got in contact.

"An agent who had recently been employed at Arsenal had seen footage of me earlier while I was playing in Tromsø when he was working for Chelsea, so he remembered me from a few years earlier.

“He contacted Arsenal’s scouting department in Scandinavia, and they said ‘he’s not on our radar’, he hasn’t really played any games’.

"Luckily for me, this guy had a gut feeling about me and went against the advice and brought me over.

"The first training sessions with the Under-23s went really well, and then it got better and better each day throughout my time there.”