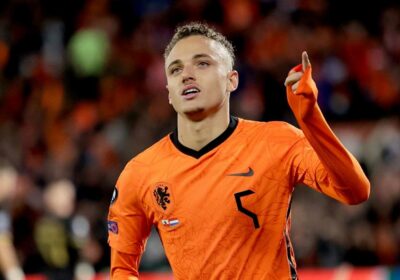 ARSENAL are ready to make their interest in Noa Lang formal with a £25million bid, according to reports.

The Club Brugge youngster has been on the Gunners’ radar for some time but has now hit the headlines with a first international cap for the Netherlands.

Mikel Arteta is keen to bring the 22-year-old to the Emirates in January as he looks to bolster his attacking options.

The Arsenal boss faces competition from the likes of AC Milan to land the winger’s signature.

Now Voetbal24 reports the North London club are preparing a £25m bid to bring Lang to the Premier League.

The Dutchman only moved to Brugge permanently this year having impressed while on loan from Ajax last season.

He was called up to Louis van Gaal’s Netherlands squad for their latest Group G World Cup qualifiers.

And Van Gaal gave him the nod in the 1-0 victory over Latvia as he was brought on with 30 minutes left.

Arsenal were set to wait until next summer to make their move when Eddie Nketiah and Alexandre Lacazette will be out of contract and likely to leave.

But with Milan circling, Gunners officials are understood to be readying a January bid.

Arsenal were the biggest Premier League spenders in the most recent window, splashing out around £150m on a host of new signings.

And things have begun to improve following a shaky start to their Premier League campaign, with Arteta recently named manager of the month.