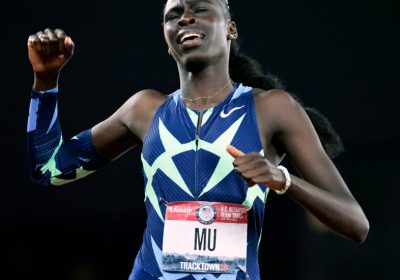 Athing Mu, a middle distance prodigy who just turned 19, ran away from the field to easily win the women’s 800 meter race in 1:56.07, the second fastest time ever run by an American, and the fastest run by anyone this year.

Mu’s race almost ended just 150 meters in, when Nia Akins stepped on the back of her shoe. But Mu only stumbled and recovered, and took the lead for good halfway through the race.

Raevyn Rogers, a University of Oregon alumni whose visage is on the massive Bowerman Tower that the runners passed twice, qualified for her first Olympics by taking second. Ajee’ Wilson, the American record holder, was in sixth place going into the final 100 meters, but sprinted by three runners to edge out Michaela Meyer for third.