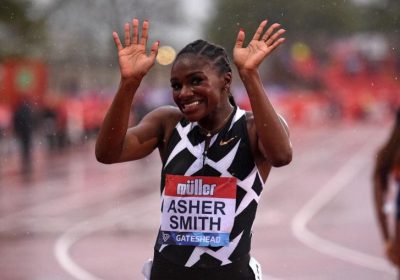 The north-eastern English city of Gateshead stepped in to host the pre-Olympic event after Rabat pulled out because of coronavirus restrictions in Morocco.

There are only six Diamond League meets after Gateshead before the Olympic Games in Japan, which start on July 23.

And after a 2020 season badly disrupted by the global Covid-19 pandemic, there is no shortage of athletes in search of top-quality competition.

Britain’s Asher-Smith, 25, started the final strongly in wet and cool conditions and crossed the line to take gold in a time of 11.35 seconds, with Richardson second in 11.44sec.

Richardson is fresh from clocking 10.72sec at the Miramar Invitational last month, making her the sixth-fastest female sprinter ever.

It was the kind of statement Asher-Smith desired after taking a prolonged absence from the track following her 200m gold at the 2019 world championships in Doha.

“I was really happy to start my 100m season with a win,” she said. “It was far from ideal conditions (but) this is good practice for staying in the moment.

The vanquished Richardson, 21, lived up to her bold persona afterwards, insisting: “I’m happy with the execution of the performance, knowing what I have to work on, and just continuing to grow and show the world I’m here to stay.

“I’m excited to show the world that my times aren’t a fluke. I can run, I am pretty, and I am a force to be reckoned with. I want all the women and the world to watch out.”

Duplantis was second with a jump of 5.55m.

Double European gold medallist Jakob Ingebrigtsen of Norway justified his favourite tag in the men’s 1,500m, winning in a time of 3min 36.27sec.

Ingebrigtsen, 20, said he was used to the wind and the rain from racing in Norway.

“I want to race as much as possible, that’s why I’m doing this,” he said. “At the same, Tokyo is my main focus so I need to be smart and do what I can.

“There are not too many competitions in the near future so I have to race what I can and hopefully be prepared when Tokyo comes.”

Home favourite Laura Muir destroyed her rivals in the women’s 1,500m, charging down the home straight to take victory in 4:03.73.