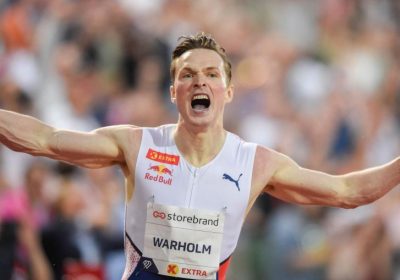 OSLO (AFP) – Norway’s Karsten Warholm fired out a shot at potential Tokyo Olympic rivals when he shattered the long-standing 400m hurdles world record at Thursday’s (July 1) Diamond League meet in Oslo and warned he had “more in the tank”.

Warholm, the world and European champion, clocked 46.70 seconds in his first hurdles race of the season to beat the previous best of 46.78sec set by American Kevin Young back in 1992.

As the Norwegian raced through the line to loud cheers from the 5,000 fans at Oslo’s famed Bislett Stadium, onlooking Swedish pole vaulter Armand Duplantis – himself the world record holder in his event – was left punching the air and reaching for his mobile phone to take a photo.

“I knew that I had fast times in my body for a long time, but it’s one thing to know you’re in good shape and another to go out and perform,” said the 25-year-old Warholm.

“This was just a perfect moment, everyone’s talking about this world record that’s been standing for many, many years – it’s older than me actually.

“I knew I had it in me but of course it’s very special to do it, I’m just really happy and really proud, it’s an amazing moment.”

Warholm added: “This is my first 400m hurdles of the season so I really think there is more in the tank. It would be sad if my first race was the best.”

The result sets up the 400m hurdles as one of the most attractive-looking events at the July 23-August 8 Olympics.

Warholm will come up against arch-rival Rai Benjamin in the Japanese capital, the American himself having run a stunning 46.83sec to win the US trials last month, although the pair are also scheduled to meet in Monaco on July 9.

Only Warholm, Young, Benjamin and Qatar’s Abderrahmane Samba have dipped below the mythical 47-second barrier.

“It might take another world record to win the Olympics,” Warholm said. “There rare such a lot of great guys out there at the moment who will all be aiming to do it and win gold.

“I’m going to make sure that the level is on top… it’s going to be really tough but this is what makes the event interesting.”

Duplantis also dominated the pole vault. Coming in at 5.61, when four of the nine vaulters were already out of the competition, the US-based Swede went with success over 5.81, 5.91 and then a meeting record of 6.01.

Despite a close first effort at 6.19m, his two further vaults fell short.

It meant that the 21-year-old was unable to improve on his own world record of 6.18m set indoors last year, when he also vaulted 6.15m outdoors, finally eclipsing the 1994 mark set by all-time great Sergey Bubka.

American Sam Kendricks, the defending two-time world champion and bronze medallist in Rio, was second with a best of 5.91m, ahead of France’s 2012 Olympic champion Renaud Lavillenie (5.81).

“The world record’s going to come soon,” vowed Duplantis. “I like where I am.

“I’m a month away from the most important meeting of my life… it’s building up to be good. I’m trying not to change anything too much.”

In other events, Ethiopia’s Yomif Kejelcha scorched to a world-leading personal best of 7:26.25 in the men’s 3000m, also a meeting and Diamond League record.

The world 10,000m silver medallist is a two-time world indoor 3000m champion and showed all his prowess over the distance as he easily kicked away from Kenyans Jacob Krop and Nicholas Kipkorir Kimeli.

There was also success for Kenyan veteran Hellen Obiri as the defending two-time world champion won the women’s 5,000m in 14:26.38, while Australian Stewart McSweyn topped the podium in the mile race, clocking a personal best of 3:48.37, in the absence of home favourite Jakob Ingebrigtsen, who opted out of the race with a sore throat.