Why Australia and New Zealand need each other more than ever Kick the Aussies out of Super Rugby. The sport is dead. Turn the lights out, send them home. There's nothing like some trans-Tasman hate to get the pulse racing on a Friday afternoon.

The New Zealand Herald's rugby writer Gregor Paul does Aussie-baiting better than anyone, but his latest column is off the charts, suggesting Australian rugby, having "set course for oblivion", is no use to New Zealand anymore if the Waratahs can't put away the Blues at Brookvale Oval. 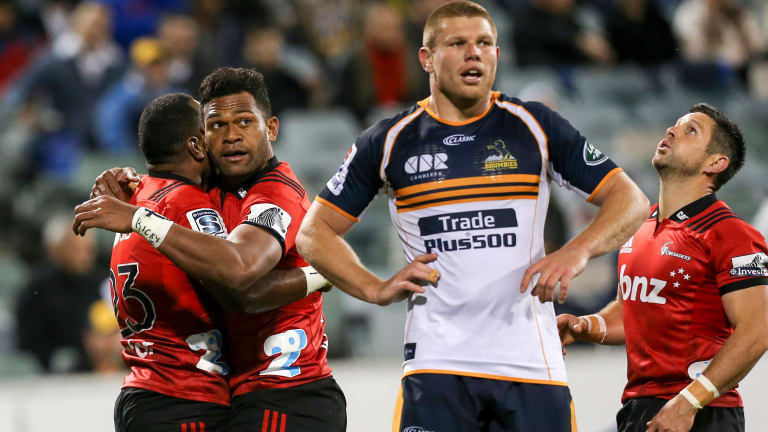 Better off without them? New Zealand’s growing dispair over Australian rugby.

"It will be time for New Zealand Rugby to genuinely question whether they want any attachment to a vessel that is clearly sinking without a trace," he wrote.

"But three wins in three years is not a bad run so much as confirmation that rugby in Australia has set course for oblivion and intends to be in a thousand pieces by the time it arrives. The question won't be why give them four Super Rugby teams but why give them any at all? A solitary Bledisloe victory over a half-strength All Blacks side last year can't paper over the cracks of a sport in freefall across the Tasman."

It cuts close to the bone. Not because Australian rugby fans will be offended by his sentiments, but because they're tired and brow-beaten. There's a grain of truth in what Paul says. It is surely unnecessary to repeat the stats but they don't lie. Thirty-six consecutive Super Rugby losses chalked up against Australian teams by their New Zealand rivals over the past three seasons and 15 years since the Wallabies won the Bledisloe Cup.

It's only a grain of truth, though. And while it is tempting to match the arrogance of that attitude in response, the whole truth is that Australia and New Zealand need each other more than ever in rugby. If the Kiwis ever gave their growing hubris free rein and cut "Aussie" adrift they would sink soon after.

It's economics. New Zealand rugby is in rude health on the field but off it NZRU boss Steve Tew worries about the same things as his good mate Raelene Castle at Rugby Australia. How do we arrest the decline in live match attendance and stabilise television ratings? How do we stop the one-directional flow of talent to the northern hemisphere? And, chief among headaches, what will the broadcasters be willing to pay us for the next five years of professional and Test rugby?

One thing the leaked SANZAAR strategy paper makes crystal clear is that Australia, New Zealand and South Africa are stronger together. Experts suggest that while Australia's population and economy mean Rugby Australia could go it alone with a domestic competition, New Zealand would not survive flying over its neighbour to play South Africa.

It is fanciful at best, embarrassing at worst, to suggest that New Zealand's recent, impressive dominance has made it immune to market forces. Tew's balance sheet is as dependent as Castle's on the 12-yearly rainmaker that is the British and Irish Lions. Why else would he be flogging off the All Blacks to the highest bidder for overseas Tests, like this year's third Bledisloe fixture (Japan) or the 2016 Ireland Test in Chicago?

Australia are guilty of many crimes, and failing to exploit the SANZAAR partnership's biggest market is one of them. That's a challenge for Castle and her new best mate, Nielsen consultant Michael Tange, who is busy working up an informed opinion on what version of Super Rugby will work best for Australia.

Rugby Australia is also guilty of sowing the seeds of the current high performance malaise. That's not a short term fix. Current and recent past RA boffins have done good work bringing Australia's proud state and territory unions together in a more collaborative model and that will bear fruit down the track.

What Australian rugby does need is some reassurance. Castle's listening tour has gone on long enough, it is time to hear what her plan is for the game. A comforting word from the Australian game's touchstone, Michael Cheika, wouldn't go astray either. He is as mad as a cut snake, but Australian fans hang on his every word.

And let's hope Daryl Gibson has fed a few lines to his team from good old Gregor Paul. Nothing like some trans-Tasman hate to get the forwards frothing on a Saturday night at Brookie.