Ashleigh Barty and Daria Gavrilova have secured Australia's return to the Fed Cup World Group for the first time in four years.

Barty beat Lesley Kerkhove 6-4 6-2 in Sunday's first reverse singles rubber before Gavrilova defeated Quirine Lemoine 6-3 6-2 to give Australia an unbeatable 3-1 lead over the Netherlands in their best-of-five-match playoff in Wollongong. 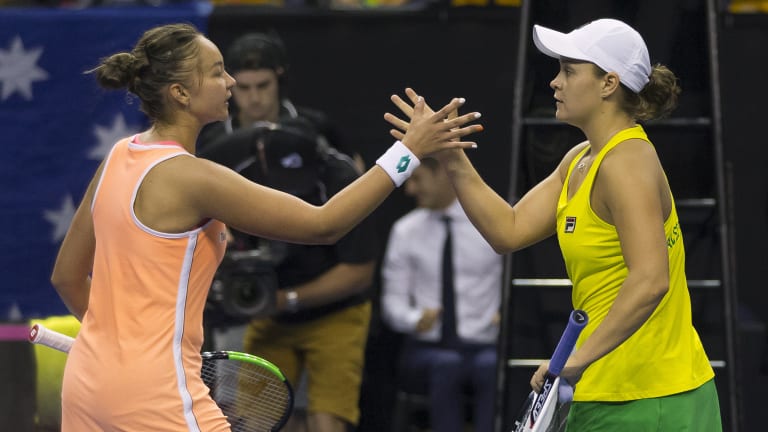 Ashleigh Barty of Australia defeats Lesley Kerkhove of the Netherlands.

The two teams had been locked up at one rubber apiece after Saturday's opening singles matches, with Barty dispatching Lemoine 6-0 6-2 and Samantha Stosur crashing to a shock 7-5 7-6 (7-1) loss to Kerkhove, the world No.210.

With French Open semi-finalist Kiki Bertens among the Netherlands' top four players who opted out of the tie, Dutch captain Paul Haarhuis arrived in Australia without anyone ranked inside the world's top 200.

But Kerkhove's stunning upset of Stosur in the first rubber had given the underdogs hope of springing a major boilover.

Barty, though, lived up to her standing as the top-ranked player in the tie with a pair of commanding straight-sets wins to put Australia back in the box seat.

After replacing Stosur on Sunday, Gavrilova buried the demons of her horror showing in February – when the world No.24 suffered shock losses in both her matches in Australia's 3-2 escape against the Ukraine in Canberra.

The Russian-born 23-year-old draped herself in the Australian flag and completed a lap of honour around the court after clinching victory on Sunday. 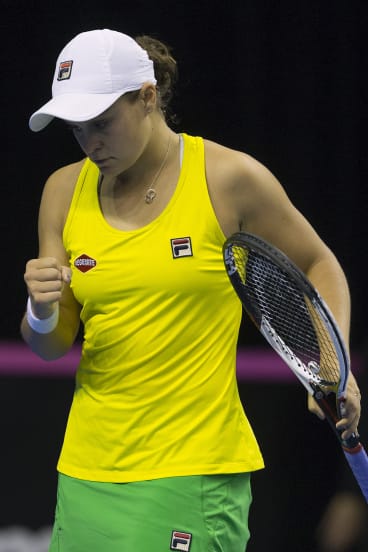 Barty’s gives Australia a 2-1 lead in the Australia-Netherlands tie.

"I was super nervous. Just playing for your country is so much harder than just playing any other tournament."

The draw for next year's eight-team World Group competition will be held after the 2018 final in November.

Germany, the Czech Republic, France and defending champions the United States are also assured of spots in the 2019 World Group.

The other three places will be decided on Sunday night when Belgium and Italy, Romania and Switzerland and Japan and Great Britain complete their playoffs.