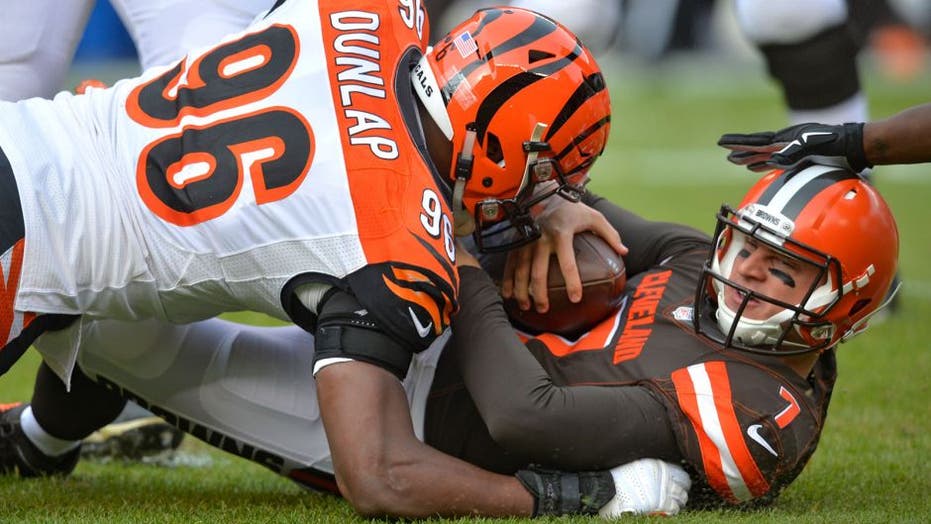 Cincinnati Bengals defensive end Carlos Dunlap appears to be ready to part ways with the franchise after 11 seasons, going so far as to put his house up for sale after losing to the Cleveland Browns on Sunday.

Dunlap has been publicly at odds with the Bengals since he was apparently demoted to the third-string earlier this week. He shared a picture of the updated depth chart on a white board with the caption, “I don’t got time for this.”

But things heated up at the end of the Bengals 37-34 loss when Dunlap was seen arguing with defensive line coach Nick Eason on the sideline.

His frustrations were confirmed when he took to Twitter to apparently put his house up for sale.

BROWNS’ ODELL BECKHAM JR. LIKELY OUT FOR THE SEASON WITH TORN ACL

“6000 sqft city view with huge balcony. 4 bedroom. 4.5 bathroom. In one of the best school districts for sale. Do your market analysis and make me offer. Serious inquiries only with proof of funds!” he wrote in a since-deleted tweet.

Dunlap is in his 11th season with the Bengals and earned two Pro Bowl selections during the 2015 and 2016 seasons, but has not been selected since.

He had a solid season in 2019 despite the Bengals’ poor record. He recorded nine sacks and 63 tackles.

He has recorded one sack and 18 tackles this year — but none on Sunday.