Less than an hour before the first bounce, Nathan Buckley and Simon Goodwin plunged into ice.
For one of them, things would only get colder from there.

All 18 AFL coaches committed themselves to the punishment that for most of us is rare and unusual, but for their players is just another Monday.

Essendon coach John Worsfold, dressed as Neale Daniher complete with mullet and 1980s woollen jumper, admitted this was the only thing 18 AFL coaches could agree on. 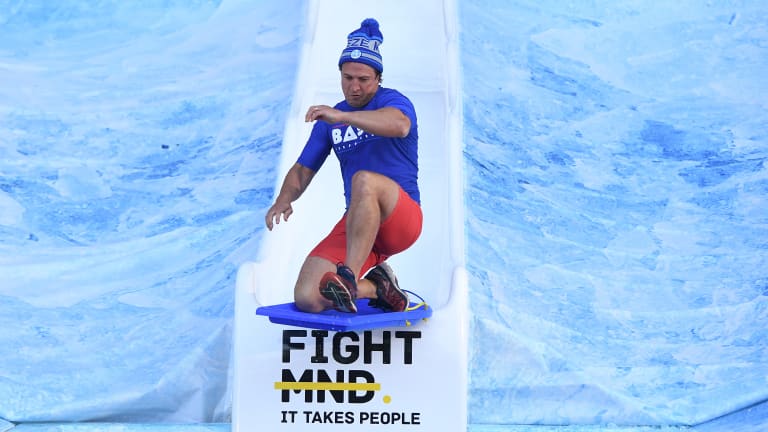 The cause was the Big Freeze to raise money to find a cure for Motor Neurone Disease, which has afflicted Neale Daniher – one of the coaches’ own – and will surely kill him.

The coaches all agreed to the plunge without hesitation.

Daniher delivered his coach’s address to the coaches beforehand.

The coaches bought into the spirit of the day. John “Horse” Longmire came as a jockey. Alastair Clarkson, who has had a testy time with his friend Longmire this year, came as a horse in Swans gear.

Identical brothers, Chris and Brad Scott, dressed as each other.

Lions coach Chris Fagan, who got his start in the AFL with Daniher, dressed as The Reverend, in honour of his mate.

Buckley went down the slide more soberly as a fire fighter. Daniher has been at Collingwood this week with a Collingwood fan and a fireman of 35 years, Murray. Murray also has MND.