Home » Sport » Boxing: From poverty to mixing with millions – The making of Duco boss David Higgins

Boxing: From poverty to mixing with millions – The making of Duco boss David Higgins 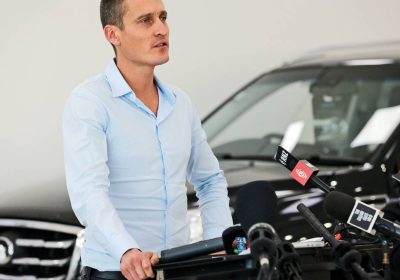 Duco founder and boxing promoter David Higgins went to the movies with his mate. It changed the course of his life.

When David Higgins starts riffing on a subject, it can be a long, occasionally fascinating, always tortuousprocess.

He will tell you how the “big” sports in New Zealand have turned their most prized assets — the players — into “sanitised” versions of themselves and “uniformed robots”. That theme will veer off tangentially to explore his belief that Israel Adesanya’s popularity is in large part because of his unbuttoned individuality.

He’ll tell you what he’d do if he was in charge of one of these sports and without pausing to take a breath reveal the “chip on his shoulder” he possesses towards those sports who have failed to embrace him or his ideas.

If you listen to his episode on the Between Two Beers podcast you’ll learn that he was just warming to his theme. You’ll also learn that Higgins is many things but he’s neither sanitised nor robotic.

He’s not really a boxing promoter in the classic sense of the term either, but here he is anyway, on the eve of one of the biggest heavyweight bouts in the country’s history, still up to his neck in the fight game.

In 2008, Higgins was mooching around, having made a small dent in the events world.

He’d grown up the kid with the least in his classes at Kohimarama primary school and Selwyn College, having grown up in poverty, but harnessed an obsession to buy his mum and him a house.

“I didn’t have the luxury of smoking cigarettes and wagging class because I didn’t have wealthy parents to fall back on,” he tells the podcast.

A commerce degree followed but his heart wasn’t really in it, nor was it in the role he took at a paper firm. He quit to start work in events and marketing for the Employers and Manufacturers Association and discovered he was quite good at it.

When he struck out and started Duco he put on a New Zealand-China business event and hired former prime minister and head of the World Trade Organisation Mike Moore as the keynote speaker.

With Moore on board a whole bunch of previously sceptical corporates signed up too and the event made $70,000. More importantly, it taught Higgins an invaluable lesson.

“If you don’t have credibility or reputation you can rent it.”

Other business-themed events of varying success came and went but Higgins was getting bored and restless and he was no closer to buying a house.

It was then his great mate David Letele, who’d find a degree of fame as the self-styled Brown Buttabean (sometimes scornfully described as Duco’s circus act), convinced him to go to a theatre screening of When We Were Kings.

While most people who watch it succumb to the sheer magnetism of Muhammad Ali, Higgins was more interested in the convicted killer with the big hair, Don King.

He started thinking about King and a certain fight that had been talked about in New Zealand for the past couple of years but never seemed to eventuate.

“I was in that roll-the-dice mode because I was thinking about giving up [events] anyway, so I thought, ‘F*** it, I might as well give it a go’.”

He got David Tua over the line first with a promise of half a million. He thought Shane Cameron would be easy. He was wrong.

“They were outraged that we had secured Tua. They were very difficult to deal with and had no interest.”

Cameron’s people wanted pay parity, a bold strategy given the respective careers, but it worked. Higgins promised another half a million he didn’t have.

“We had this tiger by the tail but then we had to cash-flow fund it because we had to pay the boxers every month.”

It didn’t help that influential voices like broadcaster Murray Deaker and boxing aficionado Bob Jones were publicly rubbishing the fight. TVNZ didn’t want it and TV 3 said no. There wasn’t a suitable venue in Auckland.

Hamilton stepped up and so did Sky TV, who offered pay-per-view. At an early meeting numbers were discussed. Sky executives explained the record was 22,000 for Lennox Lewis v Mike Tyson. They agreed that 15,000 would be a good target. Duco needed 44,000 to break even.

The cynics around the table rolled their eyes when Higgins told them he’d get 80,000.

The week of the fight, Duco is a million dollars in the hole. If the fight gets 22,000 PPVs or less, the company is going under and would be remembered, Higgins says with a touch of melodrama, “as a national disgrace”.

Using Bob Dylan’s line from Like a Rolling Stone as a marker, Higgins felt that a man who had nothing had nothing to lose.

Then-Skychief executive John Fellet was in the call centre on the day of the fight. Every hour, he would text Higgins with PPV take-up updates. The figure kept creeping up by the hour. By mid-afternoon he had enough to cover the bills. By the time the fight started, he was swimming in gravy.

“We broke even at 4 or 5 o’clock but it kept going up and up and broke all records.”

Fast forward to 2021 and the events industry has been decimated by Covid-19. Boxing feels like it is losing ground to mixed martial arts by the day, but Higgins is still here.

Between Tua-Cameron and now he’s created the NRL Nines — “I was sitting in a pub eight beers deep transferring $2m [prize money] into a bank account,” he says of the deal to get it started — the Brisbane Global Rugby 10s and the hugely popular Black Clash. He’s secured the global licence for Synthony, a hugely popular dance party symphony orchestra crossover.

He’s taken Parker from an amateur with a so-so record to the WBO world heavyweight title, and he’s done it in a unique, controversy courting way that is both boxing cliché and yet, paradoxically, inimitable.

Never was this shabby theatre more on display than in the lead-up to Parker’s fight with Hughie Fury, cousin of Tyson Fury, who comes from a large family of Irish Traveller stock.

A clearly intoxicated Higgins made a spectacle of himself at a press call in the days leading up to the fight, needling Fury’s father and trainer Peter Fury, and all hell broke loose.

In his defence, Higgins said the British Boxing Board of Control had treated the Parker camp like uncivilised colonials, the fight was not getting any traction among the media and that the promise of a neutral ref had been reneged on. For the prosecution, Higgins was at least three tequila shots too many to the wind after drinking with Frans Botha.

“We decided to make a scene. We made them wait and turned up 20 minutes late. There was no plan and by this time I was like a man possessed. I was genuinely outraged about the referee and I walked up to Peter, looked him straight in the eye, and said, ‘How can it be a fair fight if your cousin is the referee?’

“Peter went off. Who the eff are you? I thought I was relatively calm. I had made my point and left.

“The New Zealand media ate me for breakfast. Wrote me up as a lunatic, a maniac, a disgrace, an embarrassment … I was back at the hotel. Joseph and Kevin didn’t know what to say. It was all a bit embarrassing. To be honest, I’ve never felt so alone in my life after that. I’m getting roasted, I’m a disgrace, my team is a bit embarrassed, the referee has not changed, I’ve upset some dangerous people and I’m sitting by myself in my hotel room. I finally get some sleep and the next morning there’s lots of death threats on my phone from Travelling people in Manchester. Messages like: ‘I can’t wait to get you to Manchester, we’re going to slit your throat.’ ‘You better watch your back, we’re going to stick a screwdriver in your spleen.’ That sort of thing.”

Higgins ended hiring a former Chechen paramilitary as private security before going to Manchester for the fight.

But here’s the thing: the ref did get changed, the fight did start to get some long awaited coverage and promotion, Parker did win (he’s now a great mate of Tyson Fury to boot), and Higgins did survive.

He’s still here and he owns a house, not that he’s much impressed by it.

“I was lying inside one day and it was raining and this thought hit me: ‘Shit, it’s the same as renting. The roof keeps the rain off, the door opens and shuts. Renting and owning is the same thing. The house functions the same way.”

This feature was based on excerpts from the longform interview podcast Between Two Beers with Steven Holloway and Seamus Marten.