There aren't many who can't recall at least one of Tim Cahill's five World Cup goals.

There was Australia's maiden goal when, in Germany 2006, the baby-faced Everton star equalised against Japan at the death and rifled in a second from outside the box to reignite the golden generation's hopes. 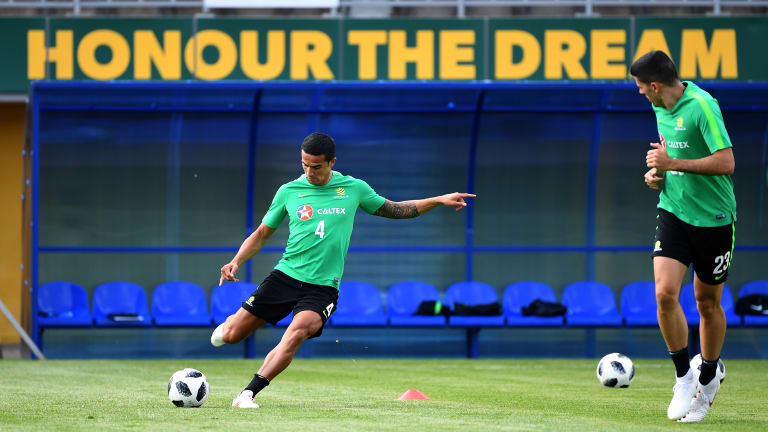 On for young and old: Veteran Tim Cahill puts in some work in camp alongside emerging Socceroos star Tom Rogic.

In 2010 he climbed above Serbia's defence to give Pim Verbeek's side the lead in the ultimately futile fight to make the last 16 again in South Africa.

Then came 2014 in Brazil where, down 2-0 to Chile, the talisman's impeccably timed header stopped the rot.

Five days later he scored another for the ages, barrelling in an outrageous volley with his non-preferred left foot that clattered the crossbar on its way to bringing Australia level with the Netherlands.

The Socceroos' all-time record scorer is responsible for nearly half his country's 11 World Cup goals to date and is already in elite international company, having scored at three consecutive tournaments.

If he does it again in Russia, the 38-year-old will join the legendary Pele and Germans Uwe Seeler and Miroslav Klose as the fourth player in history to have found the net at four World Cups.

"To even be mentioned with those greats as an Australian is insane." 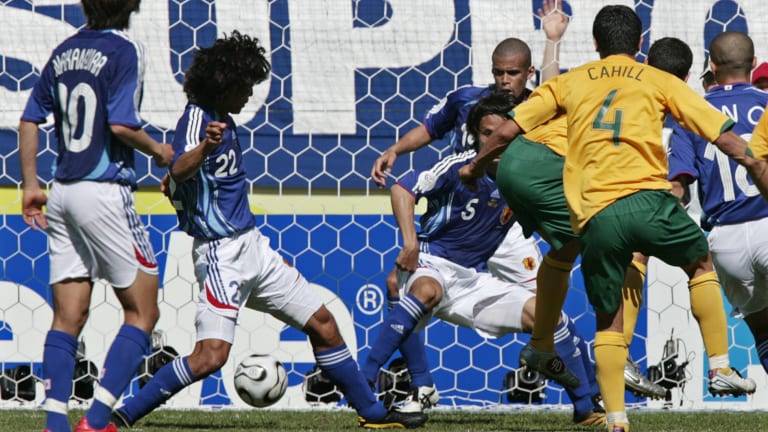 Tim Cahill announces his presence on the World Cup stage with his first of two goals against Japan in 2006.

World Cup group foes France, Denmark and Peru will all have noted his double against Syria in October that saved Australia's qualifying campaign.

However, Cahill knows his chance in Russia will almost certainly come off the bench.

Coach Bert van Marwijk has labelled him "a special case" for selection in the final 23 due to his knack for changing games and off-field leadership.

But following a well-documented struggle for minutes at Millwall, Cahill knows he's no longer the Socceroos' main man up front, with Andrew Nabbout in the box seat and incumbent first choice Tomi Juric and Jamie Maclaren also competing for the striker role.

"I knew under Ange for the national team that we've got top strikers … I knew I wouldn't be the main guy," he said.