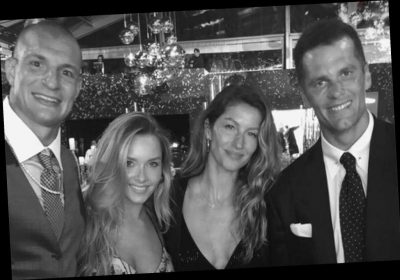 Camille Kostek kicked off her Super Bowl Sunday with a sweet throwback snap.

Taking to her Instagram story, the longtime girlfriend of Tampa Bay Buccaneers tight end Rob Gronkowski shared a black-and-white photo of the couple as they posed with Tom Brady and his wife, Gisele Bündchen.

Brady, who is set to play in his 10th Super Bowl, joined the Buccaneers last March after 20 seasons in New England. Gronkowski later came out of retirement to join his former Patriots teammate in Tampa Bay.

“Remember that time you retired after this win but then you came back, played for a new team and now gearing up for another SB. PROUD OF YOU,” Kostek shared in a separate story.

Brady, 43, and Gronkowski, 31, last won a Super Bowl with the Patriots in 2019, when New England defeated the Los Angeles Rams, 13-3. Gronkowski retired after that game.

Kostek, 28, a Sports Illustrated Swimsuit model, has been linked to Gronkowski since 2015.

In addition to the Buccaneers’ biggest fans attending Super Bowl 2021, Brittany Matthews and Kayla Nicole are among the Kansas City Chiefs WAGs in attendance for Sunday’s game.