Junior Paulo will spend up to 10 weeks on the sidelines in a nasty blow to a Canberra Raiders outfit stuck in a logjam of teams trying to force their way into the top eight.

Paulo is facing eight to 10 weeks out of action with a mid-foot sprain suffered against the Gold Coast Titans last weekend, with the barnstorming prop unable to rest his hulking 123 kilogram frame on his injured foot. 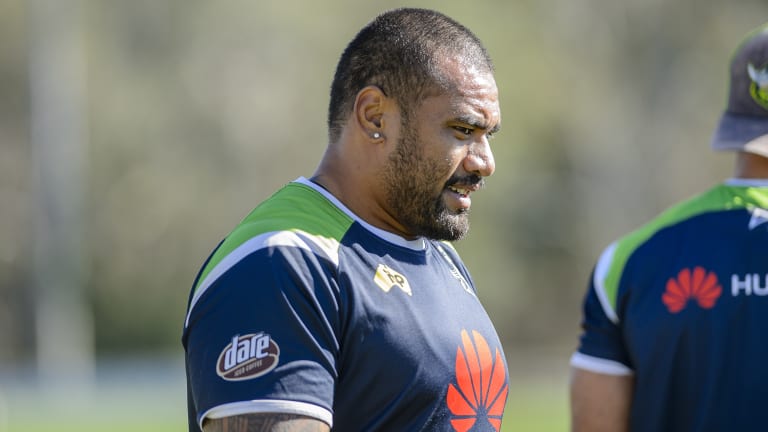 Junior Paulo will miss at least two months of football.

He will not require surgery but the 24-year-old will be in a moon boot as the Raiders prepare to face the Cronulla Sharks in the NRL's indigenous round at Canberra Stadium on Sunday.

Paulo is not due back until at least round 18, which could see Shannon Boyd shuffle back into the front-row alongside Sia Soliola and open the door for Charlie Gubb or Liam Knight to earn a recall.

The Raiders enforcer is set to return to the Parramatta Eels on a four-year deal worth almost $3 million at the end of the season.

With the loss of Paulo shaping as a major blow, Soliola will assume the responsibility of setting the tone in the front row as Canberra look to continue their resurgence.

"It’s generally the responsibility of the eldest I guess, to take charge of a lot of things. That’s where my role is as one of the senior players, just to lead more by our actions," Soliola said.

"We’ve practiced over a couple of months now what our mindset needs to be like when things generally don’t go our way. What you saw on the weekend is how we’ve been training. We’re doing some really good stuff, we just let ourselves down in patches.

"We’ve always backed ourselves in attack but the questions and challenges come in our defence and that is where a lot of our improvements have come."

Re-signed forward Luke Bateman says the Raiders have spoken at length about covering the gap left by star players and hopes Canberra can do it better than a Sharks outfit that could be without Wade Graham.

Graham aggravated a hamstring injury last weekend and looks set to miss the Raiders clash, which could leave him facing an uphill battle to press his claims for the State of Origin series opener.

"We spoke about that and Ricky has talked a lot about that. If you get 17 individuals that play well and all contribute, you’re a hard team to beat," Bateman said.

"You only need three or four individuals to have bad games and that can be the difference between a win and a loss. If you lose someone as big as Junior you’ve got blokes there to fill his role.

"I know a lot of people have been saying that we haven’t really beaten anyone so it would be nice to go out there and perform well against someone who are considered genuine premiership contenders.

"[Graham] is a State of Origin player, if they’re missing it is always a plus for you."

The Raiders will be boosted by the inclusion of Joe Tapine after he entered an early guilty plea to a grade one dangerous throw charge, while halfback Sam Williams is in the frame for a return this week.