Home » Sport » 'I can't take a trick': Reynolds' shoulder plays up again to add to woes

'I can't take a trick': Reynolds' shoulder plays up again to add to woes Josh Reynolds hopes a recurring shoulder problem will not cause any more interruptions to a frustrating season but admits it is concerning that it keeps troubling him.

The Tigers five-eighth played for much of their 30-12 defeat to Gold Coast Titans on Sunday with his left arm hanging down, such was the pain of a knock to that shoulder. 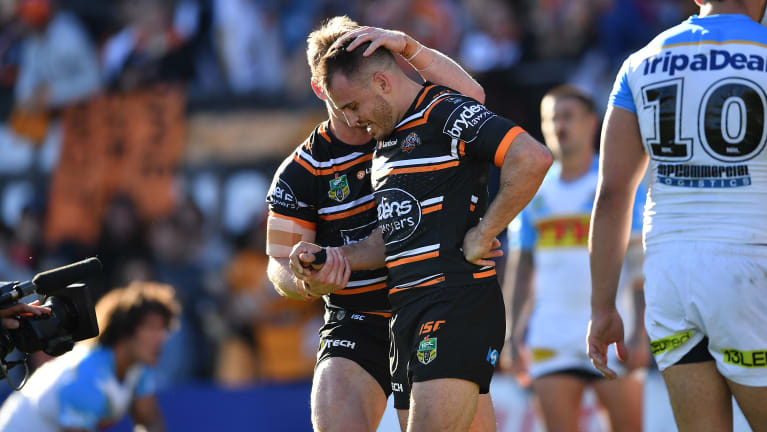 Winged: Josh Reynolds aggravated his shoulder injury in the defeat to Gold Coast

Yet having already sat out the majority of his first year in Tigers colours with injuries, including to the left shoulder – this was only his fifth NRL appearance in 2018 – he is determined to fight through the discomfort.

Reynolds did just that in his first outing at Leichhardt Oval, scoring a brilliant try before the shoulder began to be an issue, but will seek out medical advice before attempting to press on for the final third of the campaign.

“It’s happened a fair bit now. It’s not like it’s a structural thing, it just gets hit and it struggles to come back. It feels pretty weak but I just have to put up with it. There is nothing much I can do,” Reynolds said.

“I’m going to have to look into it. It’s a hard one because I don’t want to even be thinking about it. I can’t take a trick this year … hammy, shoulder. But I can’t be sobbing. I want to be playing. I’ve just got to make sure I do everything I can and hopefully work with the docs and that and sort something out.”

Reynolds had a painkilling jab at half-time of the clash with the Titans.