FORMER world champion Carl Froch has shown off his ripped physique with a video he posted on his Instagram story.

The 43-year-old looks in incredible shape, despite last competing inside the ring in 2014 when he knocked out George Groves at Wembley. 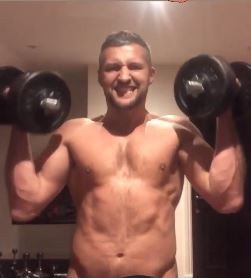 Froch retired in 2015 after announcing his 'desire' to carry on fighting was gone.

He won 33 out of his 35 contests losing only to Andre Ward and Mikkel Kessler – though he later avenged his defeat against the Denmark legend in a thrilling 12-round war in 2013.

The Nottingham native picked up four world titles in the super-middleweight division, where he held the WBC belt twice, as well as the IBF and WBA strap.

And despite being out of the ring for over six years, Froch has shown his 81,000 followers he is still in top-top shape.

The Sky Sports boxing analyst posted a clip of himself lifting weights in a home workout.

Froch – who was blocked by Piers Morgan on Twitter in September following a furious row about coronavirus – recently had his say on heavyweight contender Oleksandr Usyk.

Speaking after the Ukrainian's points victory over Derek Chisora, the Cobra claimed he doesn't pose a threat against Anthony Joshua.

He told Sky Sports Box Office: "Has it answered questions for me to say, 'Usyk belongs in there with Tyson Fury, or with Anthony Joshua, or even with someone like Deontay Wilder?'

"I'm not so sure it does. I think he would struggle. The pace and pressure from Anthony Joshua, and the combination punches.

"An even bigger, heavier, more solid, fresher heavyweight like AJ – and he lands more effective shots on the target.

"I don't know if that's answered the questions for me. I'm not putting him up there with the top three heavyweights in the world."