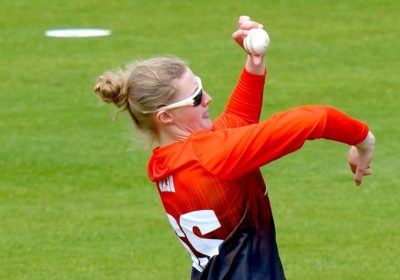 Dean picked up the last four Sparks wickets in the space of 10 balls, finishing with figures of 5-19 to roll the home side over for just 83 in 17.5 overs. Central Sparks vs Southern Vipers scorecard

Marie Kelly (36) and Emily Arlott (22) had given Sparks a solid platform at 63-3, but Georgia Elwiss (3-16) captured two quick wickets, setting the stage for Dean to blow away the lower order.

Although Arlott then removed Vipers captain Georgia Adams inside the first over, Danni Wyatt slammed 45 from 33 balls to put the outcome beyond doubt.

After Wyatt’s departure, Maia Bouchier struck an unbeaten 25 to guide the Vipers home with 41 deliveries unused.

The all-rounder made 58, took 4-13 and pouched an important catch as the visitors secured victory, restricting the Diamonds to 106-9 in reply to their own 118-6.

WE WIN!!! 12-run victory over @North_Diamonds gives us a Roses win in the Charlotte Edwards Cup opener. Diamonds, chasing 119, finish on 106-9. Take a bow @EmmaLamb236 – you superstar

Lamb and Natalie Brown (25) put on 63 for the fourth wicket, while Phoebe Graham and Katie Levick both finished with figures of 1-18.

Diamonds openers Hollie Armitage and Leah Dobson put on 31 in the first four overs, but two quick wickets for Lamb turned the tide and, despite an innings of 32 from Sterre Kalis, the home side came up short.

Sunrisers registered their first success in any format, with Mady Villiers hitting 36 and Grace Scrivens an unbeaten 34 to guide them to a comfortable seven-wicket victory over Western Storm at Taunton. Western Storm vs Sunrisers scorecard

Storm never fully recovered from the loss of early wickets after being put into bat and had to settle for a below-par 129-6, with Nat Wraith and Sophie Luff making 36 and 31 respectively.

💥SUNRISERS WIN!!!💥
A exceptional performance from the whole team!

Sonali Patel was the pick of the Sunrisers’ bowlers, claiming 2-26, while Katie Wolfe, Kelly Castle and Scrivens all weighed in with a wicket apiece.

Although Danielle Gibson maintained Storm’s hopes by bowling Villiers with an inswinging yorker, Scrivens and Amara Carr – who struck the winning boundary to finish 18 not out – sealed their side’s win with 14 deliveries to spare.

The 23-year-old took 4-15 with her off-breaks as Lightning were bowled out for 107 in 19.1 overs before launching the run chase with 30 off 14 balls – Stars cruising home with 41 deliveries to spare.

A great start to the Charlotte Edwards Cup, next up we play @CentralSparks at Canterbury next Saturday! pic.twitter.com/L0LxjTUlit

Lightning struggled against the Stars’ spinners, who claimed seven wickets between them, with Smith’s fellow off-spinner Kalea Moore taking 2-20 and leg-spinner Dani Gregory 1-22.

Beth Harmer (34) and Abbey Freeborn (30) were the only Lightning batters to make any impression, but their total was nowhere near enough and Phoebe Franklin’s 24 off 29 finished the job for the visitors.