Michael Cheika has named an unchanged line up for Australia's second Test against Ireland in Melbourne on Saturday.

It is the first time Cheika has used the same 23 players in consecutive Test matches in his three and a half years in charge. 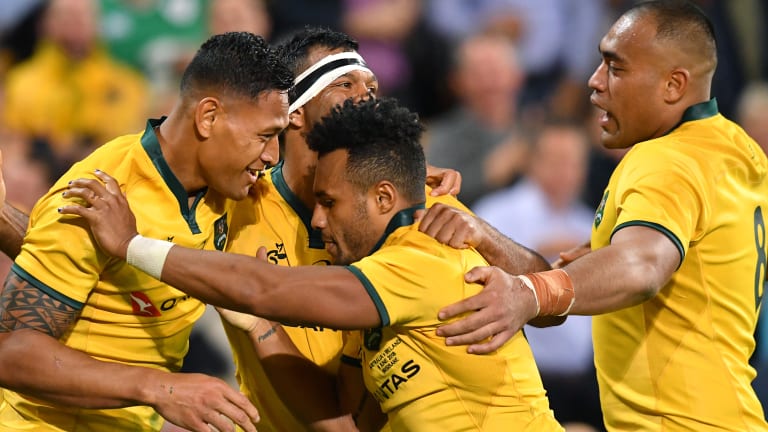 Sticking tight: Michael Cheika has kept faith with the players who got the job done against Ireland in Brisbane last week.

Caleb Timu retains his starting spot alongside No.8 David Pocock and No.7 Michael Hooper in the back row, with Cheika resisting the urge to rush back NSW flanker Ned Hanigan. In the second row, Adam Coleman and Izack Rodda have held onto their spots despite Brumbies lock Rory Arnold serving out his suspension. And up front debutant Brandon Paenga-Amosa earns his second start at hooker.

The decision is a vote of confidence in the team that went one-nil up against Ireland with an 18-9 victory in Brisbane last week.

Unlike Joe Schmidt, who was widely expected to make a raft of changes, Cheika has rewarded solid performances with more game time. Playmakers Kurtley Beale and Bernard Foley retain their combination, while the back row assembly of aerial specialist Israel Folau, Dane Haylett-Petty and Marika Koroibete are also intact.

With showers and some wind forecast at AAMI Park on Saturday, and a beefed up Ireland forward pack in mind, Cheika has also retained a forward-heavy six-two split on the bench, with Nick Phipps backup halfback and Reece Hodge expected to cover a number of positions.