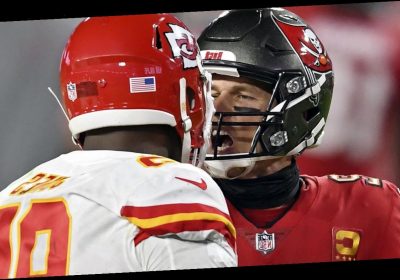 The Tom Brady-Chris Jones beef is one of the most underrated feuds in the NFL going into Super Bowl LV.

Jones, the Kansas City Chiefs’ defensive end, has gotten into it with Brady in past games against him. The rivalry reignited during the team’s Week 12 game against the Tampa Bay Buccaneers.

Jones was asked about the friction with the Hall of Fame-bound quarterback on Thursday.

Jones and Brady exchanged some words during the Chiefs’ win over the Buccaneers in November.

He explained in an interview with Barstool Sports’ “Pardon My Take” last February that his trash-talking was getting underneath Brady’s skin.

“You gotta understand — I talk a lot of s–t on the field. That was the first time I’ve ever seen Tom Brady get mad at a defensive lineman, when I talked s–t to him,” he said, adding that he would tell Brady he needed to retire or take a shot at his age.

When the then-New England Patriots quarterback got up during their December 2019 game, Jones said it was the fastest he saw Brady move.

Brady addressed the trash talk after his matchup with the Chiefs that year.

“We were going at it for a little bit. He was pretty talkative out there, so I think there’s a healthy rivalry,” he told WEEI Radio at the time.

“I typically don’t try to make the d-linemen any more angry than they probably already are with me, because they’re the ones that get paid to hit me,” he said. “So I don’t really give them any incentive typically, but I couldn’t really resist at certain points.”

It will be interesting to see whether Jones can rattle Brady again during Super Bowl LV.