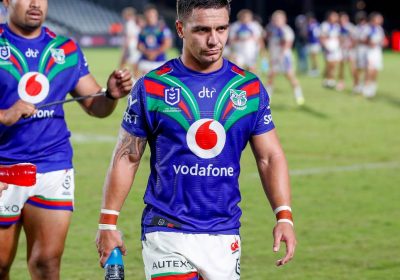 If the Warriors are going to have a hope of featuring in the NRL playoffs this season, they have some problems to solve.

First and foremost: where are the points going to come from?

They have only scored 20 or more points once in five games – 34 scored against a wounded Canberra Raiders side who had just one man on the bench after the first quarter of the game and fatigued late in the piece.

The Warriors have only managed to post 12 points in each of their last two outings, and their inability to turn pressure into points resulted in back-to-back losses.

The club are having success in the middle of the park, with the likes of Ben Murdoch-Masila, Leeson Ah Mau and Tohu Harris making their presence felt this season, as was marquee prop Addin Fonua-Blake before an unfortunate season-ending injury.

However, when the team get inside that red zone of the opposition’s 20m, the attack has been like driving a car with the handbrake on – there’s movement, but it’s clearly not working as it should.

Of the Warriors’ 16 tries this season, seven have come through forwards – who have mostly scored early in the set running hard, straight lines from close range. Of the nine tries scored by backs, centre Adam Pompey has three, while two more have come from individual running plays through the halves.

The side have 11 assists on their 16 tries – with fullback Roger Tuivasa-Sheck leading the way with three, followed by forward Harris and five-eighth Kodi Nikorima with two each.

“That goal-line attack is obviously where we’re not getting it quite right at the minute,” coach Nathan Brown admitted to Newstalk ZB’s D’Arcy Waldegrave. “We have to look at what we’re trying to do and do we tinker with it or do we just keep working hard at what we’re doing?

“Against the Raiders we scored 34 points and did very, very well. Then we came into the Roosters where we struggled a bit and needed to work on a few areas. Then again on the weekend, inside the red zone we weren’t great but if we got the ball to the right people on some different occasions, we certainly would’ve come up with a few more tries.”

While they’re leading the competition in a number of attacking stats and are among the upper echelon in others, the Warriors are 12th in tries scored with 16. Only two of these have been scored on the wing – both through Ken Maumalo.

The only teams below them in try-scoring are the North Queensland Cowboys (13), Brisbane Broncos (12), Manly Sea Eagles (eight) and Canterbury Bulldogs (six) – all teams that many have already written off this season.

The Warriors are also one of just six teams yet to crack the 100-point mark for the season. Over the next two weeks, they meet two of the highest scoring teams in the competition in the St George Illawarra Dragons (26 points per game) and the Melbourne Storm (28ppg), and things could get ugly if the Warriors don’t find a way to convert pressure into points.

Brown has indicated that the team’s combinations are a work in progress, particularly after they lost incumbent halfback Chanel Harris-Tavita after the second round to injury. However, it will be interesting to see what he does in the coming weeks should they continue to struggle with their options in good field position – particularly as Reece Walsh has now joined the club and Brown has previously indicated his desire to give the young fullback some reps in the halves this season.

“It’s a good question how long you look at those things; you don’t want to get caught chopping and changing. I was very settled at the start of the year with Chanel; we knew where we were heading there and Sean came in as Chanel’s back up,” Brown said.

“It’s certainly not something you want to panic about. From experience and watching, what I can tell you is changing halves every second week doesn’t really work out very well for not only the coach but the team as well.

“When we started the year from game one to two to three, our attack was growing nicely and then the last two weeks it’s declined a bit, and sometimes it can be combinations as well. There’s a couple of things to look at there, but it’s certainly the part of the game that we know we need to get a lot better at.”