Home » Sport » City fired up to go all the way, says midfielder Mauk Stefan Mauk believes he is playing in the best form of the season – and the fact that he picked up the man of the match award in Melbourne City's elimination final win over Brisbane would suggest that he is not far off the mark.

Mauk, the City midfielder who scored the opening goal in the 2-0 win over the Roar, believes his side is mentally in the right place and now has enough big game experience to see off Newcastle next Friday night's A-League semi-final in the Hunter Valley. 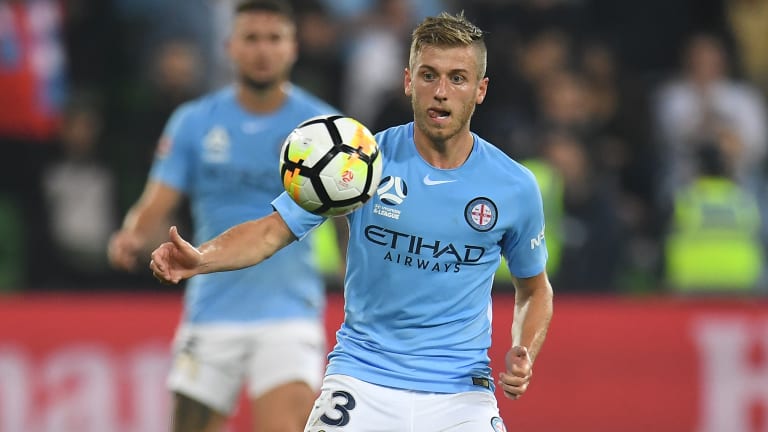 City have already finished in their highest ever position on the A-League table (third) and have matched their  best ever finals achievement, reaching the semi. Getting to a grand final would make this a season to remember for Mauk, his teammates and the club hierarchy who have invested in a new training ground and infrastructure in recent years to try to put the team on a competitive footing.

Asked if he was in top form, Mauk was quick to respond.

"I think so. It's the first time in the last four or five weeks where I’ve been completely injury free and feeling confident. That plays a massive part.

"I had a few niggles early on in the season.

"I finally got over them and have been able to focus on training well rather than just getting through the sessions. There’s a big difference.''

Captain Michael Jakobsen has missed the past two games and must be considered a doubt for the semi-final, but the fact that City didn't miss a beat is evidence of the club's strength in depth, says Mauk.

"Ozzie Malik came in and played a great game. Fitzy (Nick Fitzgerald) off the bench as well.

"We’ve got a strong squad and that showed tonight. It's not just one or two players playing well, it’s the whole team."

Mauk is no stranger to grand final glory, having won a premiership with Adelaide United.

But he points out that others in this squad know the feeling too.

"We spoke about that as a group. The coach said we’ve got a lot of winners.

"Not just myself. Brattsy (Luke Brattan) who won a lot at Brisbane, Ollie (Oliver Bozanic) who I think won it at Central Coast.

"We've got players that have won things. These are the games that matter. No one cares about round one or even round 27. It’s just important that we take our chances when they come."

City have a formidable record against the Jets this season, so while Ernie Merrick's team will have home-ground advantage, the Sky Blues will travel with confidence for next Friday night's sudden death match.

"They’re a good side. They finished second and deservedly so. They had a little bit of a dip in form towards the end of the year. We know we have to be on our game.

"We’ve beaten them twice up there and drew once down here. We know if we’re playing at our best we should be able to beat them

"We’ve got good combinations in midfield and in with Bruno (Fornaroli) up top with Dario (Vidosic) and Daniel (Arzani) everybody’s complimenting each other.

"It's a massive thing. Everyone’s out there playing for each other."