NRL clubs have been put on legal notice — and it appears Bulldogs players, including Kieran Foran and Aaron Woods, could be next. That’s the stunning development in Des Hasler’s legal case against his old club.

The Bulldogs should be very nervous with the most recent turn of events in the Hasler v Bulldogs Supreme Court proceedings. Many clubs have been subpoenaed this week in relation to the matter and aren’t happy about being dragged into it. 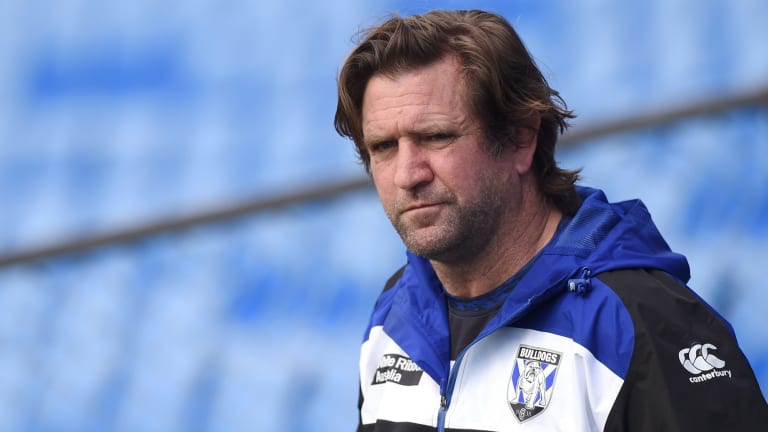 Legal battle: The Bulldogs have a difficult process to negotiate with Des Hasler.

The reasons the clubs have been subpoenaed remain unclear, but word out of the Bulldogs camp is that they are worried that Hasler’s lawyers will not be stopping there.

Hasler was taken off the market when he agreed to terms with the Bulldogs and any rival club wanting his services would have reassessed their options. The Bulldogs then decided Hasler wasn’t the man for them and that is the reason for the current court case. Perhaps that is why rival clubs are being called on by Hasler’s lawyers, to establish a bigger damages case?

It is my understanding that the Bulldogs are worried about what went on during the negotiations between the club and many of their big signings last year. Those concerns stem from the Bulldogs making it clear to those players and their managers that Hasler was signed on as the head coach for the 2018 and 2019 seasons.

It is my understanding that at least three of their big signings were made on the back of the fact that Hasler was going to be there this season and next.

When Hasler’s contract was terminated in September, many players felt misled and let down by the club. There have been rumblings that, given the Bulldogs’ poor start to the season, some of those players could be looking for outs in their deals.

If the Bulldogs represented to the players that Hasler was going to be the coach, and they relied on that information to enter into the contract, then those players may have a case.

The problem is made worse for Canterbury by the fact that former Bulldogs chairman Ray Dib negotiated most of those deals. He is no longer in charge of the club after being dumped by the members in February.

Dib is also not on speaking terms with key people on the new Bulldogs board and may well be unwilling to assist their case.

Barrett urged to walk away from Manly 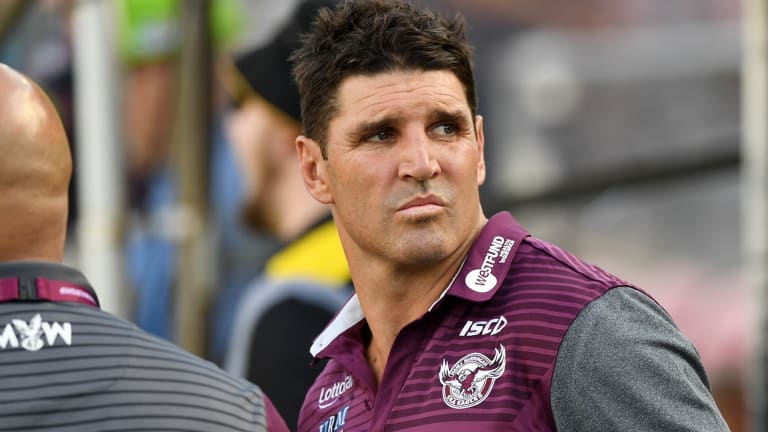 Manly coach Trent Barrett has been encouraged to walk away from a tough situation at the club.

Manly would like nothing more than for the Gladstone drama surrounding skipper Daly Cherry-Evans and Jackson Hastings to be over and done with. But it’s a long way from over.

Trusted confidantes of Manly coach Trent Barrett have been telling him to walk away from the Sea Eagles. Now.

He has received calls of support from rivals such as Ricky Stuart and Phil Gould, but the Sea Eagles’ salary cap is a mess, the club has no real ability to bring in new talent, seven players are off contract and players are being required to sign on for minimum wage or thereabouts.

None of that is due to Barrett. He has a roster that is dominated by Cherry-Evans, who will earn about $1.3 million this season. Four other players, Marty Taupau, Tom and Jake Trbojevic, and Dylan Walker take up a significant chunk of the rest.

That means the Sea Eagles need to sign players on smaller contracts, and with that sometimes comes problems. It’s why Barrett has been urged to walk. But his view is that he has never quit anything in his life.

The issue is far bigger than a few players — and there are definitely some — who don’t like Hastings. The issue for Manly is that Hastings has basically been branded as someone who can’t play as part of a team. It’s something the Hastings family is fuming about.

It was not something pushed by Barrett publicly; he said it was his decision not the players’ decision. Players have supported Hastings publicly and privately.

The other area the Hastings family is not happy about — and they are considering legal options — is their view that there was workplace bullying. That relates to pranks. The club has form in that area.

One of Barrett’s assistants, Willie Peters, punched team conditioner Dan Ferris on a night out after persistent pranks.

But there is another issue. I was told the players disobeyed Barrett by going out in Gladstone. I put that to Barrett and he said he had no problem with it because the club’s security guard and Cherry-Evans, the club’s captain, were with the group.

I took him at his word and didn’t pursue the story. The players have since been fined. If what Barrett told me is true, they should have no issue, because he knew and endorsed them going out.

We now know that Cherry-Evans and Hastings sledged each other at the strip club over their respective relationships with players. Hastings left and, 10 minutes later, DCE did the same. Cherry-Evans then showed up at Hastings’ hotel room. What happened next is in dispute, but there was an altercation.

Bogut's reign could have started in 2011 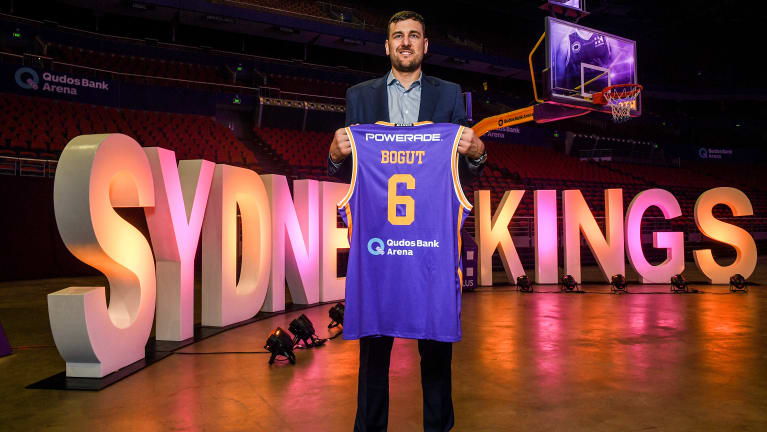 The King is here: Bogut poses with the second Sydney Kings jersey he has been presented with.

The Sydney Kings’ signing of Andrew Bogut gives the club and National Basketball League a much-needed shot in the arm. Long-time Kings fans rejoiced at the sight of Bogut posing with his new No.6 shirt.

What may come as a surprise to many is those same fans could have seen Bogut in that very jersey in 2011.

Bogut was presented with a personalised uniform during a two-hour meeting with Kings officials and was far from inconspicuous as he walked the city streets with the jersey in hand back then. But Sydney failed to lure him to the city (during the National Basketball Association lockout) due to insurance complications.

Plenty of Blues fans would love to see prolific try-scorer Jimmy ‘‘the Jet’’ Roberts running out in Melbourne for State of Origin I, but there’s a Broncos directive dramatically harming his chances.

In an era when players use the media to pump up their chances of selection, Roberts has been gagged by his own club.

After another strong outing during Brisbane’s win over Souths on Thursday, Roberts was happy to talk on camera to Nine News reporter Jake Duke. And he knew he was not about to get stitched up because Duke and Roberts grew up together and are best mates.

Sadly the interview never went ahead because the Broncos have banned Roberts from doing any media this season.

What a shame the public can’t hear Roberts’ thoughts on a possible Origin debut and how he has turned his life around.

Let’s hope NSW coach Brad Fittler and his selection panel aren’t influenced by the lack of hype around Roberts. Need we remind the NRL of the line it has been pushing: #talkthegameup.

We commented on the distinct lack of leadership from the Sea Eagles last week. It extends beyond the Gladstone drama.

We have been told it was left to coach Trent Barrett to talk the players through the salary cap crisis a few weeks ago.

There’s no bigger name in Australian sport right now than Ben Simmons, and he’ll soon have the pay packet to match. 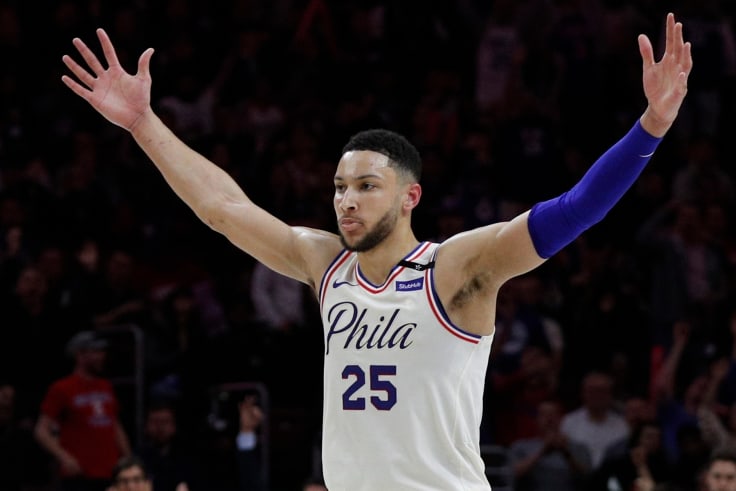 Superstar: Ben Simmons is the giant who can lead the Boomers to glory against the US.

At just 21, the Newcastle-raised basketball prodigy during the week led his success-starved Philadelphia 76ers to a play-off series win over the Miami Heat, as talk bubbles that his resurgent team will have to fork out about $100 million for his next contract.

With his profile rising rapidly, Simmons sits down with 60Minutes tonight, and reporter Tom Steinfort says ‘‘it was refreshing to see a talent so big with an ego so small’’.

That’s in no small part due to Simmons’ parents, Dave and Julie (who apparently steal the show in the story).

They live around the corner from their son in Philadelphia, keeping him grounded. ‘‘There’s a lot of meat-head athletes out there,’’ Julie tells 60 Minutes. ‘‘And my boy’s not going to be one of them.’’

Dave played in the NBL for the Newcastle Falcons and Sydney Kings. In a nice touch, he was coached by Brett Brown, who is Ben’s coach at the 76ers.

Dave would have played for a pittance in those days, a far cry from his son’s new-found wealth.

The soon-to-be-crowned NBA rookie of the year shows off his new black Ferrari for the cameras but was a little more coy about pop-star girlfriend Tinashe, confirming they were an item before his management stepped in.

Simmons is still an Aussie at heart: he often uses a Sherrin during warm-ups, loves that they’ve started selling meat pies at 76ers games and plans to return home when the season is over.

While he’s eligible to play for the US at the 2020 Olympics, Simmons says he’ll proudly wear green and gold.

‘‘Australia can have its own Dream Team … that’s definitely one of my goals, to go out and represent Australia and bring the gold home,’’ he says. ‘‘That would be amazing.’’

Nine Sports producer Chris Hodgkinson is a mad Sydney Swans supporter, but he had mixed emotions when the Swans played Geelong yesterday.

His great grandfather Jack Conway was Geelong’s first VFL captain and yesterday the family presented the club with a watch given to Conway in 1898 to be placed in the club’s museum.

The only issue was the club gave the family seats among the Cats fans.