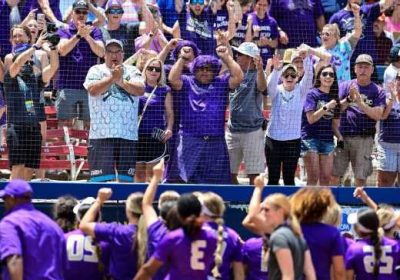 OKLAHOMA CITY, Okla. — Carolan Bledsoe gladly stayed up all night earlier this week sewing patches on every jersey for every team that made the Women’s College World Series, a routine she had done every year since 1997.

Every year except one: last year, when the coronavirus pandemic canceled NCAA spring sports and championships, including what would have been a 30th anniversary celebration for the WCWS in Oklahoma City. As reality began to set in a year ago, friends kept asking Bledsoe, “What are you going to do since you can’t sew the patches?” She had no idea.

So when she got the call this year to sew patches once again, Bledsoe got to work. But she did not stop there. She was so excited to get back to USA Softball Hall of Fame Stadium and the WCWS for the first time since 2019, she stayed up until 1 a.m. Thursday baking cookies to give to all the friends she has made inside the ballpark over the years.

Like clockwork, those acquaintances and friends all started showing up to say hello, at her usual spot along the third-base line before the opener started between James Madison and No. 1 Oklahoma.

“It’s just so wonderful to be able to see the people that we’ve been seeing out here for years and years and years,” said Bledsoe, who had her husband, kids, grandkids and great-grandkids with her at the first game. “People are just squealing and hugging each other. Because it really is just a wonderful experience, and people are just glad to be back.”

As soon as Bledsoe finished her sentence, Lori Burns walked up, wearing her Oklahoma gear. Burns drove from Fort Worth, Texas, to cheer on her Sooners, and her first stop once she walked into the stadium was to see Bledsoe. The first year Burns came to the WCWS, about 15 years ago, her seat was in front of Bledsoe’s. They were the only Oklahoma fans in their area, so they formed a bond.

This past year was particularly difficult for Burns. She works in a facility that had close to 1,000 COVID-19 cases. She ended up contracting COVID-19, too, all while working on her master’s degree from Oklahoma.

“To be here, at full capacity, to not have to wear masks to do something that we would consider normal — it’s just amazing to me,” Burns said. “It almost brings tears to my eyes. I’m sure I will be crying throughout this week. I couldn’t sleep last night because I was so excited to get this started.”

Throughout the day Thursday, there was an unmistakable joy that comes with being inside a packed stadium, at an event that brings so much energy, passion and friendships along with it. Mini-reunions happened everywhere, and even those attending the WCWS for the first time felt the excitement reverberating around the newly expanded stadium, which added an upper deck to increase capacity to 13,000.

The first game between James Madison and Oklahoma was a near sellout, though the crowd noise made it feel like every seat was taken thanks in large part to the huge Sooners contingent. Teresa Boshart Yoder and her daughter, Nicole, drove 18 hours from Harrisonburg, Virginia, to cheer on the unseeded Dukes. Sitting in a sea of Oklahoma fans did not deter their excitement for being at an event they always dreamed about attending.

“We just felt this was a once-in-a-lifetime opportunity,” Boshart Yoder said. “It has been amazing.”

James Madison made it more amazing when the Dukes, in their WCWS debut, shocked the No. 1-seeded Sooners 4-3 in eight innings behind a stellar pitching performance from Odicci Alexander. Throughout the game, the smaller James Madison contingent made themselves heard with chants of their own, including, “Let’s go, CC!” when Alexander made a great pitch.

From their seats along the first-base line, Bobby and Christina Walker took it all in. It was their first in-person softball game since attending a tournament in Clearwater, Florida, in February 2020. On Wednesday, they celebrated their granddaughter’s 10th birthday, then hit the road for the four-hour drive from their home in Kansas.

Bobby was so excited to get back to the stadium Thursday, they arrived in the parking lot at 7:15 a.m., set up their tent and drank coffee. They saw friends from Indiana whom they met in 2019. Then Bobby walked around the parking lot to stop and say hello to familiar faces, including a friend from Kentucky, as if he was the resident mayor.

Beyond reconnecting friends and softball fans, the WCWS connects Oklahoma City, too. Former Oklahoma City mayor Ron Norick and former Oklahoma City fire chief Gary Marrs still volunteer at the event, setting up the amenities in the locker room for players the way they have done over the past two decades.

They have seen the growth of the tournament firsthand. When they first started helping out, there were no locker rooms in the stadium. Teams gathered under tents just outside the first- and third-base lines, and drinks were available in water coolers that Norick and Marrs had to continually fill with ice.

Now, the two of them can’t even find a quiet spot to watch the games the way they once could.

“It’s fun to see everybody again and see the excitement of the city and see the fans,” Norick said. “This feels the same to me, the same atmosphere. Everybody seems to be happy.”

That, of course, is a contrast to last year. Not having the event sent ripple effects beyond teams and players having championship dreams vanish. Sue Hollenbeck, director of sports business for Visit OKC, said the event was already sold out last year when it was canceled in March. She estimates the city itself lost $24 million in economic impact to the area.

The Oklahoma State Firefighters Museum and Oklahoma Railway Museum across the street from the stadium make between $50,000 and $75,000 in parking alone from the week, and they struggled to keep their doors open without that major source of revenue from the softball tournament a year ago.

Just outside the concourse, near the entrance to the stadium, the Edmond North High girls’ softball team sold water and soda as their major fundraiser for their program. Booster club president Tara Mitchel estimates they lost $8,000 last year without the WCWS. This year, they are not allowed to walk up and down the aisles to sell drinks inside the stadium, so they hope to make $5,000.

Parents and players were just happy to be back. As they sold drinks, Heather Lackey stopped for a minute when her daughter giddily ran over to her. She had just taken a photo with former Oklahoma standout Lauren Chamberlain.

“The camaraderie throughout the stadium has been amazing,” said Lackey, who has been to the WCWS previously but was fundraising for Edmond North for the first time. “Last year, it was so depressing. Our girls look forward to coming every year, so this has been a great opportunity to come back, and reap some rewards for our team.”

Then there are the vendors. Keith and Jeanne Graham run the Classic Kettle Corn truck, which also sells corndogs, funnel cakes and fresh-squeezed lemonade. They take their truck to events all across Oklahoma City and to neighboring towns, including many in this stadium. Keith estimates they lost $100,000 last year with all the events that got canceled.

But Keith Graham said coming back to the WCWS this year was not about recouping money. It was about reconnecting with the many people he and Jeanne have gotten to know over their 10 years serving customers at this event. Their popular truck usually has a line snaking 40 people deep — they sold out of corndogs before the first game was over.

“This being back open, and seeing people, being around people everybody just … normal. It’s awesome,” Keith Graham said. “That’s huge. That’s worth more than any sale. You don’t realize how much you miss that until it’s taken away.”