College World Series: How to watch, weather, schedule for Vanderbilt vs. Mississippi State 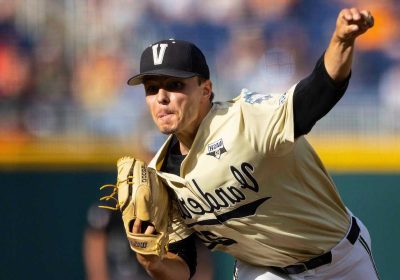 The NCAA championship calendar for the 2020-21 season wraps up this week with the conclusion of the College World Series.

The baseball championship event is back in its traditional home in Omaha, Nebraska, after the COVID-19 pandemic forced the event’s cancelation in 2020. Unfortunately, the specter of the virus still looms over the tournament with one team forced to withdraw.

The championship series will therefore be an all Southeastern Conference affair between 2019 champion Vanderbilt and Mississippi State, which is seeking its first title. The best-of-three final gets underway tonight. Here’s a quick guide, with schedule info and a few notes on the teams that worked their way through the bracket.

Jack Leiter will take the mound for Vanderbilt in Game 1 of the College World Series, while Mississippi State has selected left-hander Christian MacLeod to start in the opener. (Photo: Rebecca S. Gratz, AP)

Mississippi State: The Bulldogs advanced via the winners' bracket in their half of the Omaha draw, but that doesn’t mean the journey was easy. After outlasting Texas 2-1 in their opener, the Bulldogs needed a late rally to beat Virginia 6-5. Texas then picked up an 8-5 win forcing a decisive game on Saturday, but the Bulldogs prevailed 4-3 thanks to Tanner Leggett’s walk-off hit in the ninth.

Vanderbilt: The Commodores’ run in Omaha has been just as dramatic. They scrambled for a 7-6 victory in 12 innings against Arizona, but a 1-0 loss to North Carolina State sent them to the losers’ bracket. They survived an elimination game against Stanford, scoring the winning run on a wild pitch in the ninth. That’s when things got even stranger.

COVID protocols forced N.C. State to field a depleted team for its next matchup with the Commodores, and Vandy won 3-1 to force a winner-take-all clash to reach the championship series. Unfortunately, further positive tests forced the Wolfpack out of the tournament altogether, making Saturday’s game a no contest and allowing the Commodores to advance.

Jack Leiter will start the series on the mound for the Commodores. He recorded 15 strikeouts in his first outing in Omaha but allowed a solo homer that proved costly in the loss to N.C. State.

Landon Sims has been spectacular out of the bullpen for the Bulldogs, allowing just one run in seven innings thus far in the CWS.

Vanderbilt is seeking its third baseball title overall, having won the event in 2014 as well as the most recent CWS two years ago. … The Bulldogs are in the championship series for the second time, with a runner-up finish to UCLA in 2013. … Mississippi State is seeking its first NCAA team title in any sport. Several have come close, including back-to-back finals appearances in women’s basketball in 2017 and 2018 and a men’s hoops Final Four trip in 1996. … This is the third all-SEC CWS final in the last 10 years. The most recent was Florida’s triumph against LSU in 2017. … In their regular-season encounter in April, the Commodores took two of three from the Bulldogs in Nashville. They did not meet in the SEC tournament.

Unfortunately, Mother Nature might play a role in the series as well. There’s a chance of isolated thunderstorms in the Omaha area Monday night that could delay the proceedings.

NCAA rules prohibit a game from starting after 11 p.m. local time, so expect officials to at least get tonight’s game underway if possible. The forecast looks better for the remainder of the week.