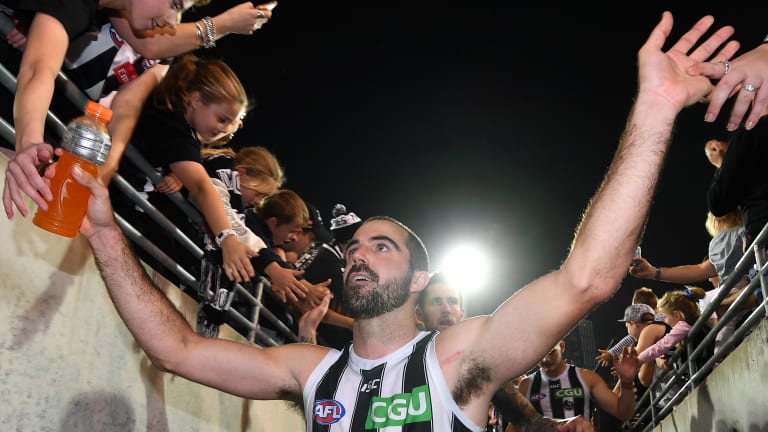 Steele Sidebottom inspects his sandwich. He looks at how it's stacked, straightens the tomato, flicks the crumbs off the plate. He checks for a stray dribble of mayonnaise or a flaccid bit of lettuce hanging limply at the back of the bread.

Satisfied, he lifts the sandwich, turns it in his hands and suspiciously checks the back, raising it higher and peeking underneath. Then he places it once more back down on the plate, straightens it again, and finally content he eats.

“I definitely have realised I am a bit OCD,” he says.

Really? Do you think?

Steele has developed this particular ritual with his sandwiches. He's not obsessive about all food, but sandwiches have to be just right.  He frets if he has to buy from Subway, because he can’t bear to watch them cut it.

“I'm not OCD about everything like some blokes, just small things. The sandwiches … I always make sure the sandwich is beautifully set out. If something is dripping off it, I’ll clean it up and make sure everything is neat and tidy.”

He is not Tim Broomhead-level obsessed (Collingwood teammate Broomhead doesn’t eat all day at the club and has a phobia about bananas, moving to the other side of the room from them) but Sidebottom's obsessions are becoming more pronounced the older he gets. Or, he thinks, maybe he is now just more aware of them. 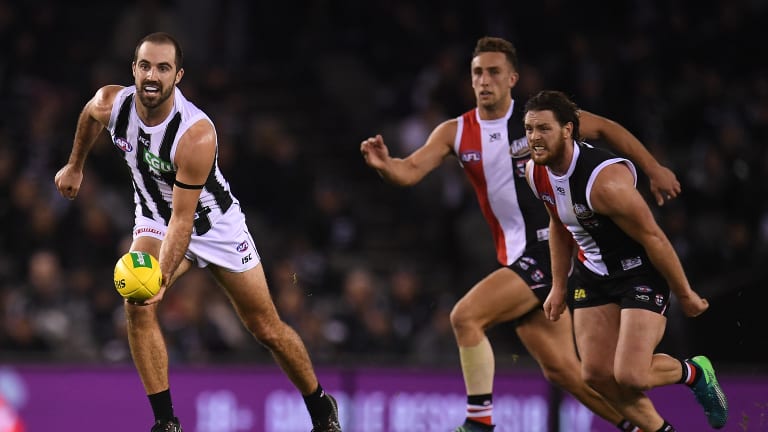 Steele Sidebottom has gone from very good to elite in the past year.

He fixates on some things. He has the footballer's superstition that sees him he wear the same jocks to games, and he tries to follow the same routines.

“If I walk my dogs in the park before a game and I have got a tennis ball I will be like ‘if I hit this tree with the ball then I think I will play well’. I always have things ticking over in my mind," he said.

“If you ask my girlfriend, she will say at times I can be lazy but if I feel like I need to clean something then I will go right out and clean everything and pull everything out. I am not full blown and mad at it like others but I am a bit OCD with some things.”

Some things like footy boots. Sidebottom knows what boots players wear. All players. Travis Cloke thought Sidebottom was winding him up when he arrived at the club and they were talking about a particularly good game Cloke had played, and 'Sidey' told him what boots he had been wearing that day. He wasn’t joking. He had committed it to memory.

“It’s funny because other than that he is not like that at all. He is not a Rain Man or anything, but like if you asked him what boots each player wore in the grand final he’d be able to tell you,” teammate Tyson Goldsack said.

“He’d tell you about pair some player had worn and he'd say that was the year the Nike Tempos had pink on them or something. He just knows it.”

Before he was drafted Sidebottom kicked 10 goals in the 2008 TAC Cup grand final, reportedly five on each foot.

Asked about it he thought for a moment and worked back through them. “The first was on my right, second left, third left … I reckon it was 6 and 4.” He is not like that with every game, but it was a grand final.

Sidebottom arrived at the club with Dayne Beams and they were close. Literally, they lived a few hundred metres away in rental houses then soon afterward bought houses a street apart.

“Everyone loves Steele,'' Beams laughed. "He is funny, but he just knows when to crack a line and when to be serious. And you can see even from a distance now I am at Brisbane that he has become a leader. He is more mature, I mean look at his hair, he doesn't have many haircuts left in him.

Table tennis is the only time Beams recalls Sidebottom losing his temper and taking it out on the table.

Sidebottom laughed at that. “That’s coming from Beamsy! He smashed everything,” he said. “Though I must admit I have become a bit that way with Fifa (the video game) too.”

Teammates feel at ease with Sidebottom. It’s something about the fact his natural resting expression is a smile that draws them in.

“The first year he arrived we did the 2km time trial and Marty Clarke was our elite runner,'' said Goldsack. "Steele beat him and he was running with this smile on his face the whole way and you thought ‘is he sick in the head? What’s he smiling about?”

The smile is disarming. He has run through 199 games now with the expression of a man who birdied the 18th.

“People always say when I am playing I am smiling. I don’t know, it's not like I am running around laughing though there is no doubt when I am playing footy that is the most fun I have. During the week there are things I don’t enjoy doing but when I get to go and play footy for that two and a half hours a week that is the best part of my week,” he said.

It helps he is getting to play games with this mates. He has become very close friends with Jeremy Howe since the first day the former Melbourne player walked through the door at Collingwood.

Howe wrote about Steele for his 200th game and said his mate suffers FOMO (fear of missing out) so was always in everything, and loved by everyone. He said ‘Sidey’ was a prankster but didn’t like it when he was on the receiving end of banter. As if to prove the point, Steele was still brooding about that line when we met to talk.

Steele doesn’t get angry with teammates. Well other than with Adam Oxley. Oxley is a very good golfer and it kills Steele that he can’t beat him.

Fierce competitiveness is common in footballers and Sidebottom has an acute case. He is the youngest of five boys and wonders if that contributed to it.

On the night of the 2010 premiership win, Sidebottom thanked his parents on the stage. He said he was the accident who came along late – “so thanks dad for throwing the leg”. His family thinks he only happened because their mum was holding out for a girl. Now he is the sister they never had.

His brother Ryan is in England now playing county cricket for Warwickshire. He plays in England as an Englishman – their mum was born in England. He had played for premier cricket for Carlton and made his first class debut for Victoria before heading to England.

Nick Maxwell was struck when he returned to the club this year that Sidebottom was a different person around the ground. Louder. Now he is one of the vocal players in the group and a genuine leader that he hadn’t been before. Steele knows what he means and he knows why the change.

“That’s me being sick of not playing finals and missing out on playing when everyone wants to play so that is me taking a bit more control of the group and of myself and the way I carry myself.”

Missing finals has given him the, umm, steel too be better. He was always a very good player, but in recent years he has been elite. Last year he won his first Copeland trophy after previously finishing second and third. He has never won all-Australian, but this must surely be the breakthrough year.

This week when he did a press conference the entire playing group emerged to listen in, support and half wind him up. It typified what Jeremy Howe said about him: "you just want to play with him''.