Canberra Raiders captain Jarrod Croker urges his team to make the most of this NRL season, which could be their last together as a number of off-contract stars weigh up their futures.

His call comes as the Green Machine look to remodel themselves from an attacking beast into a more defensively minded unit – or from a flashy Ferrari into a hard-working ute.

They're looking for their fourth win in five games when they take on the Gold Coast Titans at Canberra Stadium on Saturday. 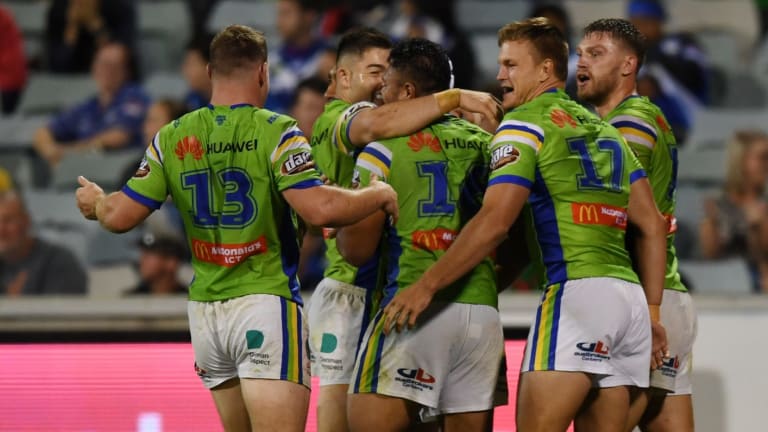 Raiders captain Jarrod Croker urged his teammates to make the most of their season together.

Ten of their 19-man squad to face the Titans are off-contract at the end of the season, with Junior Paulo, Shannon Boyd and Josh Papalii all linked to big-money deals at Parramatta, Gold Coast and either South Sydney or Cronulla respectively.

Sia Soliola's been linked to a move to re-join Nathan Brown at Newcastle, while Luke Bateman's close to re-signing for two years and the Raiders have tabled offers to Wigan forwards Ryan Sutton and John Bateman.

Croker said it hadn't been a distraction and praised the way his off-contract teammates had handled themselves so far this season.

The Raiders were just one win outside the top eight going into the round and face the team one spot below them on the NRL ladder.

Croker said it would be ideal to have all the contracts sorted as quickly as possible, but it was more important they take advantage of the group they've got at the moment.

"Very rarely are you going to have the exact same team year-in, year-out so you've got to make the most of the boys that you're with every year, boys come and go," he said.

This Raiders team exploded into the most potent attack in the NRL in 2016 as they surged to within a few points of the grand final.

They averaged 28.67 points a game and conceded 19.00 during that home-and-away season.

But if you just look at the last four games when their defence has massively improved they're only conceding 15.5 points per game and just 6.7 if you remove the big loss to South Sydney.

Again, defence will be the focus when the Green Machine rolls out against the Titans.

"We certainly don't train to be the side that scores the most points and doesn't worry about defence," Croker said.

"We want to be a good defensive side, every side does. You need good defence to win comps.

"Three of the last four games we've done it really well, we had an off game against Souths, which was pretty ordinary.

"We need to start well and start well defensively. If we can do that we put ourselves in the game."

The Raiders gave up an 18-point lead in round one to lose to the Titans through a last-gasp Konrad Hurrell try.

It was the first of three narrow losses that looked to set to derail the Green Machine before their season had barely begun.

But they've managed to grind out three gutsy wins since then, including last week's 18-8 victory over the North Queensland Cowboys to end a 12-year losing streak in Townsville.

Croker felt they'd definitely improved since they faced the Titans about two months ago.

"We've come along and won a few close games after losing the first couple of tight ones," he said.

"Defensively we've definitely gotten stronger and hopefully our attack can keep flowing off that.

"It's a game of possession at the moment and we weren't that great last week, but our defence backed it up."