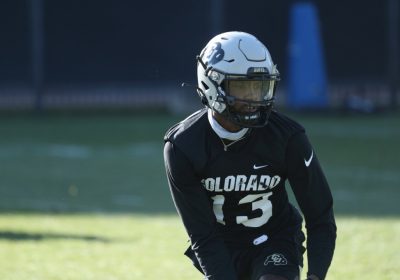 When Maurice Bell looks back at the 2020 season, he can’t help but think about missed opportunities on kickoff returns.

“I should have had three (touchdowns) last year,” said Bell, a junior receiver with the Colorado Buffaloes. “This year we’re gonna have to go for at least five. I’ve got some making up to do.”

Now one of the veterans in the receiver room, Bell is looking for big things next season, on offense and in special teams.

Last season, the 6-foot, 180-pound Bell earned the most extensive playing time of his career and, including the Valero Alamo Bowl, caught 10 passes for 115 yards and a touchdown, while also gaining 151 yards on seven kickoff returns.

Bell has been a bit limited because of injury in the early going of spring drills, but offensive coordinator/receivers coach Darrin Chiaverini said the junior is aiming to be even better than last fall.

“Maurice has worked really hard this offseason,” Chiaverini said. “He’s worked hard in the weight room, he’s worked hard obviously in the offseason conditioning program. I’m excited to see him take the next step this year.”

Bell, who came to CU in 2017 from Murrieta Valley (Calif.) High School, has never lacked confidence in his ability but said the 2020 season was a boost.

Getting on the field as a receiver at CU isn’t easy because of the depth of talent in the room.

Sophomores La’Vontae Shenault and Dimitri Stanley are both returning starters and the top two receivers from last year, while freshman Brenden Rice burst on the scene with some highlight-reel plays.

Juniors Daniel Arias and Jaylon Jackson are both aiming for starting roles, and there is an exceptional group of freshmen that includes Rice, Chris Carpenter, Montana Lemonious-Craig and Keith Miller III.

Bell, who ranked fourth on the team in receptions last year, has shown he can make plays and earn his time on the field.

“Personally to make a big step, something I really would like to work on is just being consistent and being dominant every single day,” Bell said. “Being a player that’s just reliable, that every day you’re on the field, you’re reliable to be consistent. That’s really where my big jump, I feel like, will come in.

“With the role that (Chiaverini) has me wanting to make this big jump, I’m definitely ready for it and more than excited to jump into it.”

Part of Bell’s jump could come on special teams, too. He was the Buffs’ primary kick returner in 2020 and nearly broke loose, but he said, “I was getting ankle tackled and that’s not OK.”

Whether it’s as a receiver or returner, Bell is eager to play a bigger role.

“I love just having the ball in my hands in general, honestly,” he said. “Returning kicks is definitely fun, especially with all the open space and opportunities you have back there.”