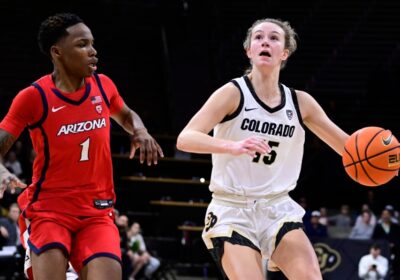 CU fell one spot to No. 25 in this week’s poll, which was released Monday. The Buffs collected 56 points to edge Tennessee (47) for the final spot.

Also from the Pac-12, UCLA and Utah switched spots, with UCLA moving up to No. 8 and Utah dropping to No. 9. Arizona remained at No. 19. USC and Oregon are also receiving votes.

No. 1 South Carolina and No. 2 Ohio State remained in the top two spots in this week’s AP poll. South Carolina received all 28 first-place votes. Stanford, LSU and Connecticut round out the top five.

This week’s poll is the first in the 47-year history of the women’s AP Top 25 that no teams from Texas are ranked. Texas is the only team from the Lone Star State receiving votes, as the Longhorns collected 35 points to come in just behind Tennessee (essentially No. 27 overall).