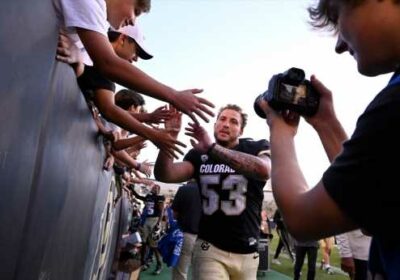 Nate Landman, Part I. If anyone deserves a final bow in front of a CU home crowd, it’s senior linebacker Nate Landman, who’s missed the past three games as he recovers from a soft tissue injury. Head coach Karl Dorrell said earlier this week that there’s a chance No. 53 could suit up for Senior Day, in addition to fellow linebacker Guy Thomas, safety Trevor Woods and cornerback Mekhi Blackmon.

Nate Landman, Part II. And if you’re wondering just how much the defense has missed him, consider these numbers: Over the last three games, CU opponents are averaging 43.3 points, 28 first downs, 14.7 rushing first downs and 460 total yards per game. The senior defender is also on track to become the first Buffs defender to ever lead the team in tackles four different times. He’s got a seven-stop lead with two games left. If he plays them.

The Buffs need points … CU is 0-5 under coach Karl Dorrell when scoring fewer than 20 in a game. The Huskies come in giving up just 21.2 per game — and only 18.7 per game to Pac-12 foes on the road. Defense travels, even if the UW offense sometimes misses its charter entirely.

… and they also need a decent start. Which is certainly possible, given that the Huskies have managed only 11.6 first-half points per game while the Buffs are averaging a lackluster 8.1 themselves. CU is 0-6 under Dorrell while trailing at the half, 7-3 otherwise. The Buffs are 7-1 in the Dorrell Era when leading at the end of the third quarter, and only 0-8 when trailing.

Jarek Broussard vs. Washington’s front seven. The Buffs are better when they run the ball with purpose. CU is averaging 40.3 carries over its last three games, and it’s not a coincidence that they’re also averaging 28.7 points per game during that stretch, too. Broussard, meanwhile, is coming off back-to-back 100-yards-or-more rushing performances for the first time since Games 3 and 4 of the abbreviated 2020 season. Against a Huskies D that’s giving up 204.8 rushing yards per contest and 4.9 yards per tote, Broussard could be in line for another big day.

CU’s linebackers vs. Washington QB Dylan Morris. Young quarterbacks can be frustrating, as Buffs fans know only too well. The Huskies are 3-1 this season in the four games in which Morris hasn’t thrown an interception, but they’re 1-4 whenever they’ve turned the ball over two times or more. If the Buffs want to start turning heads, they need to start turning some screws.

With the Apple Cup coming up in less than a week, Jimmy Lake’s exit, and the last dance at Folsom for the Buffs seniors, CU should bring a little mojo to the table. But here’s the catch: U-Dub’s defense is strong when it comes to forcing field goal attempts in the red zone. Will the Buffs hit ‘em?

A late Huskies field goal is the dagger in a close game between two bad teams. The Buffs need a serious overhaul this offseason to contend in the Pac-12.

Teams that fire their coach during the season often get an immediate boost (see Washington State, TCU and Texas Tech) but I’m not seeing it with this dysfunctional Huskies’ team. Look for a tight, low-scoring game. (Take the under). CU wins with a late field goal.