Home » Sport » Cycling: Esports racing can be more intense than the outdoor format

Cycling: Esports racing can be more intense than the outdoor format 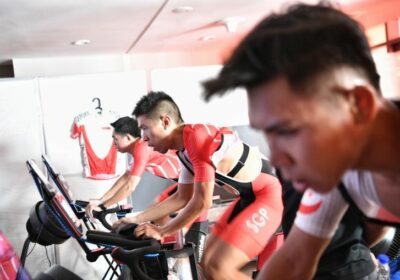 SINGAPORE – Road cyclist Darren Lim has never donned the Singapore jersey in an international race since he joined the national training squad in August 2019.

But on Sunday (Nov 28), he put one on and competed in the Asian qualifier for the 2022 UCI Cycling Esports World Championships – from the comfort of the OCBC Arena.

While he did not meet any of his competitors from other countries in-person, Lim, 23, said it was a good experience racing against other cyclists in the continent albeit behind a screen.

“It’s a totally different experience (from racing in person). You don’t have to focus so much on where you’re positioned or your surroundings. It’s more about controlling your power in your legs,” he added.

He was joined by national mountain bikers Arfan Faisal and Mun Yong Liang in the 59.5km event hosted on Zwift. It was their first time racing in an international e-sports cycling competition.

Cycling e-sports, which sees riders competing in virtual races on indoor training platforms such as Zwift, was approved by the International Cycling Union (UCI) as an official cycling discipline in 2018.

Arfan, 21, said: “I gave it my best shot but I couldn’t keep up. The Japanese are really fast but I will watch the video, reflect and see what they’re doing to figure out how I can improve.”

On the virtual racing format, he added: “Personally, I’m more of an outdoors person. I enjoy the feeling of seeing and experiencing my surroundings. When you’re in a pack, you can feel the tension and you get to use all your senses, not just your leg power.

“But it’s good that we did this together in the same venue because that really helped with the ambience. I relish this opportunity because it’s not every day that you get to represent the nation.”

Mun, 28, thought the virtual format was more intense as data such as their speeds and heart rates were there for everyone to see.

The public servant said: “You can see everyone’s data and you know when someone is attacking so you have to be alert at all times.

“This is also a good opportunity to put indoor cycling in the spotlight because it’s very accessible and more people can do the sport in a safe environment.”

Meanwhile, the women’s team of Tsalina Phang, Lyn Ahmad and Faye Foo qualified automatically for the world championships after their competitors faced technical difficulties and were unable to set up in time. The results are pending ratification by UCI.

Phang, 41, said: “It’s a bit disappointing to not have the competition because I was excited for it and hoping to end my year on a high with the race. But it’s cool that all three of us are in the world championships.”