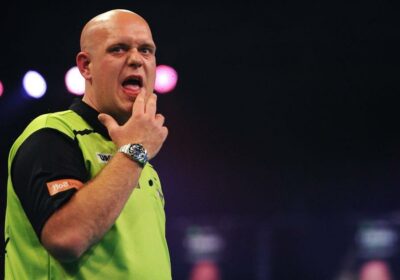 Michael van Gerwen was on the end of a rare heavy defeat when he was trounced by 7-0 by Luke Humphries in the semi-finals of the German Grand Prix at the weekend.

Such was Humphries’ dominance, he managed to restrict the Green Machine to just one dart at a double in the entire match. Humphries took that blistering former into the final, where he defeated Martin Lukeman 8-2 to claim his first European Tour title.

Van Gerwen, who is now preparing for Thursday’s round of Premier League action in Aberdeen, where he is due to face Gerwyn Price in the quarter-finals, was magnanimous in defeat, praising Humphries for his superb display.

“Sometimes it takes a special performance to beat you. And that was just that, well done @lukeh180 phenomenal game,” wrote Van Gerwen on Twitter. “I still don’t like losing but I’ll take that on the chin. Now to get home to see my family before Aberdeen. Thank you Munich.”

His sporting reaction has gone down well with fans, with one posting on social media: “Great words Michael van Gerwen always gracious in defeat and also well done Luke Humphries not many people will white wash MVG, phenomenal.”

Another added: “Classy statement from a class individual,” while a third said: “Class act! You will be back on track on Thursday!”

Who will win the next night of Premier League action in Aberdeen? Have your say in the comments section below

A fourth fan tweeted: “Your performance was great. Love to see the increasing performance in front of the crowds,” while another added: “You'll bounce back. Only good things to come now Michael.”

It was a tournament which saw a number of top seeds crash out early, leaving some fans less than impressed, with one saying: “Been a weird tournament results wise. A lot of seeded players looked very disinterested.”

Next up for Van Gerwen is a Premier League clash against Price on Thursday. The Welshman is expected to take part after pulling out of the German Grand Prix with suspected tonsillitis.