Home » Sport » Demons snap out of their form slump

Demons snap out of their form slump Coming off three consecutive losses and with a top-eight berth in the balance, Melbourne simply had to win this match against an injury-depleted Fremantle in Darwin.

A loss would have jeopardised the Demons’ prospects of playing finals for the first time since Neale Daniher was coach, back in 2006, and predictably they played with urgency and determination.

The Demons ground their way to a solid four-quarter effort, running out 54-point winners over a Fremantle team that had beaten them in eight of their past nine meetings. 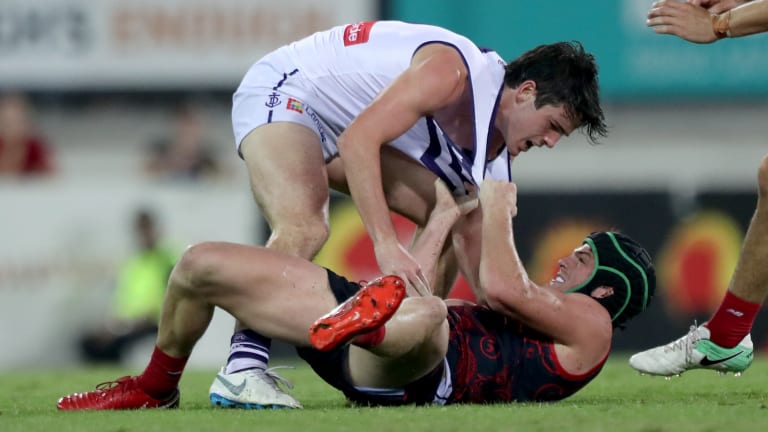 Brotherly shove: Andrew (top) and Angus Brayshaw go at it.

Former champion Garry Lyon had lamented during the week that the Demons ‘‘don’t work hard enough’’, and their own coach, Simon Goodwin, declared before the match that the team needed to ramp up their ‘‘defensive actions’’.

Melbourne’s endeavour was clear for all to see from the first bounce, but they lacked poise and polish.

The Demons dominated the opening quarter, with nearly all of the play in their forward half, but failed to capitalise, kicking 2.9. In contrast Fremantle rarely got the ball beyond halfway, yet kicked 2.0 from just four inside 50s.

It took two goals in a 30-second burst – both snapped efforts from Nathan Jones and Jeff Garlett – to help the Demons break clear midway through the second quarter. Melbourne then chipped away and produced a workmanlike third quarter before piling on a few goals as the game opened up.

Whether it was an acknowledgement that their attacking set-up had been faltering in recent weeks, or a nod to the slippery and humid Top End conditions, Melbourne went into the match with a restructured smaller forward line, selecting Garlett and Charlie Spargo and leaving out Sam Weideman. The result was a forward line that looked more cohesive and fluid.

Jesse Hogan, criticised recently for not imposing himself on the contest, began with four marks inside the opening four minutes, and was only let down by a lack of confidence in his disposal. He kicked three points before his first goal, courtesy of a free kick directly in front for a blocking infringement.

Regardless of his scoring output, the most encouraging aspect of his game was that he attacked the ball and launched at aerial contests.

It was a match full of fumbles and skill errors that did not produce many passages of play worthy of a highlights reel. But it did have some notable talking points.

In the absence of Aaron Sandilands, Max Gawn predictably continued his rich vein of form in the ruck, dominating the tap-outs and contributing solidly around the ground. He may well have done enough for another Brownlow vote or two. If only he could find a way to kick a goal from 20 metres out after plucking towering grabs – he missed another one in this game. 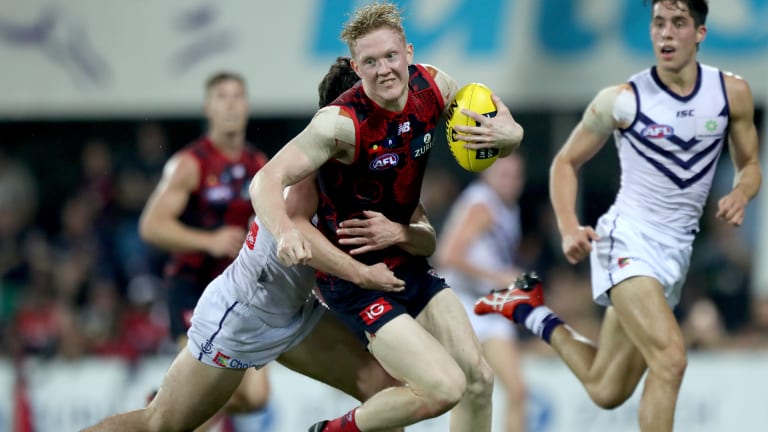 Christian Petracca, under pressure to step up and show more than teasing glimpses of his game-breaking talent, became more influential as the game wore on, eschewing the spectacular for crisp disposals that brought teammates into the match.

Melbourne veteran Jordan Lewis was again guilty of an undisciplined act, conceding a 50-metre penalty for a drive-by clip on Michael Walters that resulted in a Dockers goal in the third quarter. The elbow to the Walters midriff may cost him yet another fine.

Brothers Angus (Melbourne) and Andrew (Fremantle) Brayshaw lined up for the first time on the same field and were both useful contributors. Early in the third quarter the younger Docker won a free kick for a tackle on the older Demon, and made sure to let him know about it.

Clayton Oliver was again superb at winning contested possessions in close and distributing them outside, while Christian Salem provided some run and precision.

For Fremantle, the positives from this match again revolved around the contribution from the fledgling Dockers: Adam Cerra, Brennan Cox and Brayshaw all showed enough to suggest they will develop into quality senior players.