George Burgess is happy to entertain acting and Hollywood after rugby league but his immediate focus is on another, less-glamorous American city.

The South Sydney front-rower was snubbed for last year's World Cup, missing the chance to play for England with his brothers Sam and Tom, but his fine start to the season with the Rabbitohs has him right in the frame to be recalled for next month's historic Test against New Zealand in Denver. 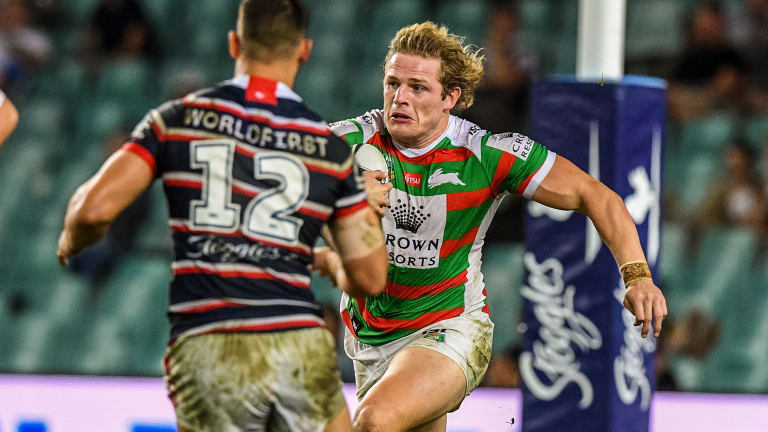 Five stars: Budding actor George Burgess’ start to the season has been impressive.

A fortnight after that international Burgess will use Souths' bye round to head to Broken Hill to shoot a scene in a movie in which he will play a "cheeky but uncompromising doorman named Ivan".

After being told by England coach Wayne Bennett his form was not quite up to scratch for the bulk of last year the powerhouse prop will continue his lengthy audition for a Test recall against Newcastle on Friday night.

"Obviously it's not nice missing out on stuff like that, especially when your brothers are involved," Burgess said.

"He [Bennett] told me if he could pick another player I'd be in there, I was close, but he felt there were a few people in front of me, which was fair enough.

"He's a very honest coach, which I appreciate, and he told me my form was not good enough in the year, which was something I needed to hear from him.

"It was tough news at the time but something I definitely used to motivate myself to do better."

Burgess has been charging the ball back into the line at speed, and despite regular criticism aimed at him and twin brother Tom at different stages last year, George pointed out he made fewer errors in 2017 than any other season.

As for the movie, Burgess said he had an interest in film, and would explore it when he hung up the boots.

His latest role is in Locusts, which has been described as an Australian version of No Country For Old Men and was written by a friend who promised him a part if it was ever given the green light to be made.

Director Heath Davis told Fairfax Media: "We needed a hulking figure and he fits the bill perfectly. We knew he’d been interested in pursuing an acting career seriously, so we tested him out and he’s great. He’s super passionate and dedicated."

Burgess, whose Souths teammates have little idea about his ambitions in front of the camera, said of the latest cameo: "The majority of shooting is out at Broken Hill. We might be able to shoot in Sydney instead of Broken Hill because my scene is indoors.

"I get a bit of acting experience, it's something I'm interested in and enjoy doing.

"I've done some short acting courses at NIDA and another one at Screenwise [acting school]."

Burgess has one of the greatest actors on the planet – Souths owner Russell Crowe – to contact for pointers.