Dockers put horror week behind them to thump Western Bulldogs The best way to shrug off a difficult week off the field is with a good win in your game on the weekend.

And after the week Fremantle had, the Dockers needed a performance like their 54-point win over the Western Bulldogs at Optus Stadium. 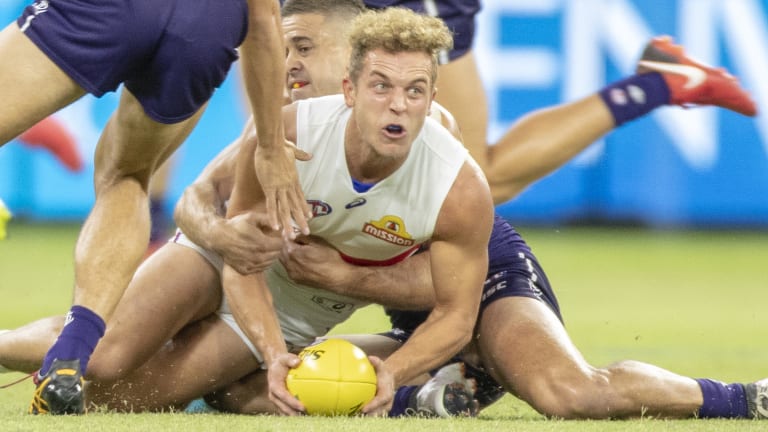 The effort from the Bulldogs however, was way down from their previous two weeks and was more akin to the opening two rounds when they also suffered big losses.

Their fight was gone midway through the second term, with Fremantle scoring 12 of the last 17 goals.

With Lachie Hunter out suspended and Jack Macrae kept quiet by Fremantle rookie Bailey Banfield, there was a massive lack of run from the visitors.

Matthew Sucking, Jason Johannisen and Mitch Honeychurch (in the first half) were able to get their hands on the ball, but mainly in the back half.

That’s where most of the second half of the game was played.

From early in the game, the Dogs showed they had no way of stopping Nat Fyfe from tearing the game apart. Which is what he did.

The 2015 Brownlow medallist had a career-high 43 possessions, beating the 40 he had against Adelaide in round nine of 2015. A performance like it was coming though, after he had 38 against the Gold Coast in round three. He’d averaged 28.5 possessions this season before this game.Fyfe was dominant, with 13clearances, seven inside 50s and goal.

When a club is being scrutinised like Fremantle did this week, it can sometimes spill on to the ground. And Fyfe made sure, from the opening whistle, that wasn’t going to happen.

The Dockers’ horrendous week started last weekend with reports of a sexual harassment claim against a senior club official – and the issue lingered throughout the week.

The Dockers then re-introduced troubled former Gold Coast player Harley Bennell back to their senior group after injury and another off-field incident had him banned from the club during the pre-season.

In the middle of all this, the coach of the Dockers’ AFLW club, Michelle Cowan, announced she wanted to look for opportunities elsewhere and wouldn’t seek a contract extension.

Then, just as the week looked to finally be over, allowing the club to concentrate on their match-day responsibilities against the Bulldogs, news broke that former forward Shane Yarran had taken his own life.

Dealing with any one of those sensitive issues is a challenge for any club, let alone all four.But Fyfe took it upon himself to take away any questions that these incidents would have an effect on their on-field performance.

He had a game-high nine possessions in the first quarter and his four clearances were damaging.He had the three Brownlow votes tucked into his socks when he left the ground at the break, with 21 touches by half-time, including 12 contested.

The first term started to look like a tug-o-war, but Michael Walters, another of Fremantle’s leadership group, kicked two goals in three minutes to open the game up and give set up his side’s 16-point break at the first change. He finished with five.

Even with the rejuvenated Matt Taberner out of the game in the opening term with a leg injury, the Dockers found other avenues to goal, with nine goal scorers.

The Bulldogs also lost a forward, Tory Dickson, with a hamstring injury not long after the start of second term, but didn’t have the back-up. Dickson had had seven touches and not bothered the scorers and just before half-time was run down by Dockers ruckman Aaron Sandilands, so things weren’t really going his way.

The Bulldogs needed a goal-kicker to stand up with Jack Redpath out of the side due to injury and Dickson sidelined.

Tom Boyd showed some promise, returning to the senior side after five goals in the VFL lastweek.He kicked the Dogs’ first goal, a mark and 55m bomb and earned a few other chances and finished with two, as did Billy Gowers.

But the ball coming in to their forward line wasn’t quality. The Dogs took just five marks in attack for the game, compared to the Dockers’ 19.

The Bulldogs also finished the game without youngster Aaron Naughton, who copped a big knock to the head in a pack during the third term.