The Eagle has landed: Moses Suli set for Manly debut Manly has negotiated a last-minute contract upgrade that will allow Moses Suli to make his club debut on Sunday. 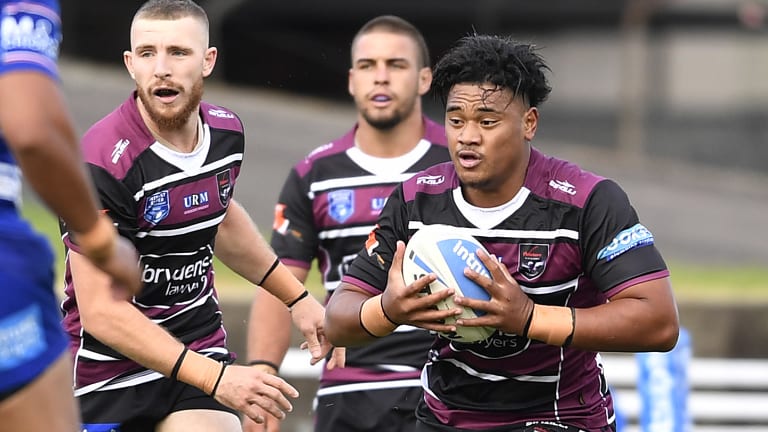 All clear: Moses Suli is set to make his first grade debut for Manly.

The Sea Eagles, already facing a raft of salary cap and selection issues, faced the prospect of not being able to blood Suli despite receiving an exemption to call him up from outside its top 30 squad.

Suli is currently categorised as a ‘development player’ and his management had an agreement that he be elevated to the top 30 – and upgraded to a salary befitting that status – before making his Manly debut.

The club is already under enormous salary cap pressure after being pinged for rorting the system, resulting in sanctions that include a $330,000 deduction from the cap for this year and next.

The Sea Eagles need to fill the remaining two spots in their top-30 squad by June 30 and coach Trent Barrett has spoken of the need to allocate them judiciously. One of those has gone to Suli, leaving the club with just one position left to fill.

Manly management came to an arrangement with Suli’s agent on Wednesday afternoon, clearing the way for him to make his Manly debut against the Roosters on Sunday.

While Suli has received a promotion from reserve grade, the same can’t be said of Jackson Hastings. While the out-of-favour playmaker has been as part of an extended 21-man squad for the encounter, he has been training with feeder club Blacktown and his exile is expected to continue.

Dylan Walker has been named to play at pivot following the season-ending ACL injury to Lachlan Croker. Whether he remains the long-term five-eighth option remains to be seen. Todd Carney could be an option for the Sea Eagles after he opted to move to Sydney for family reasons.

The controversial half had been all but cleared to resume his NRL career at Townsville, but the shift south means his future is again clouded. Carney’s manager had sounded out the Newtown Jets – affectionately known as the Betty Ford Clinic of the NRL – about the prospect of playing for the Bluebags. However, the Jets are a feeder team for Cronulla and there was no way the Sharks would entertain the prospect given they sacked – and had to subsequently settle with – Carney following the infamous ‘bubbler’ incident.

Barrett had stated Carney was potentially a player of interest before he shifted to Queensland and may again consider throwing him a lifeline.