West Coast continues to defy pre-season expectations and predictions from the game’s experts.

The Eagles are going toe-to-toe with reigning premiers Richmond at the top of the AFL leader, both now with 5-1 records, after they won the first Western Derby against Fremantle at Optus Stadium by eight points on Sunday. 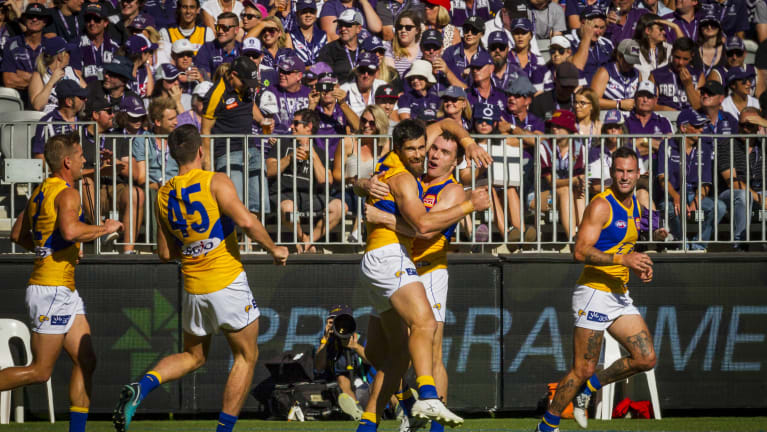 The Eagles are supposed to be on the slide after the retirements of stars Matt Priddis and Sam Mitchell from their midfield, among others.

But Andrew Gaff, Luke Shuey and Jack Redden, who signed a three-year contract extension mid-week, continued their strong starts to the season in the Eagles engine room on Sunday.

The 13.11 (89) to 12.9 (81) victory was West Coast’s sixth consecutive win against their cross-town rivals, Fremantle. It was also their fifth victory in a row for the 2018 season after they lost their season opener to the Sydney Swans.

The Eagles first goal on Sunday also presented the club with a new all-time leading goalscorer, Josh Kennedy. His 515th major in blue and yellow colours put him one ahead of Peter Sumich’s previous mark of 514 goals.

Sumich took 150 games to reach that mark; Kennedy played his 188th for West Coast on Sunday.

He had a tough day out against Fremantle defender Alex Pearce, but the dual Coleman medallist finished with three.

His teammate Jack Darling didn’t do him any favours early in the contest, getting in his way in a couple of marking contests.

But he made up for it in the second term when he kicked three goals to help give his side some momentum.

Darling is making the most of Kennedy’s late start to the season due to injury, leading the Eagles goal scoring this season after six rounds with 16 goals. 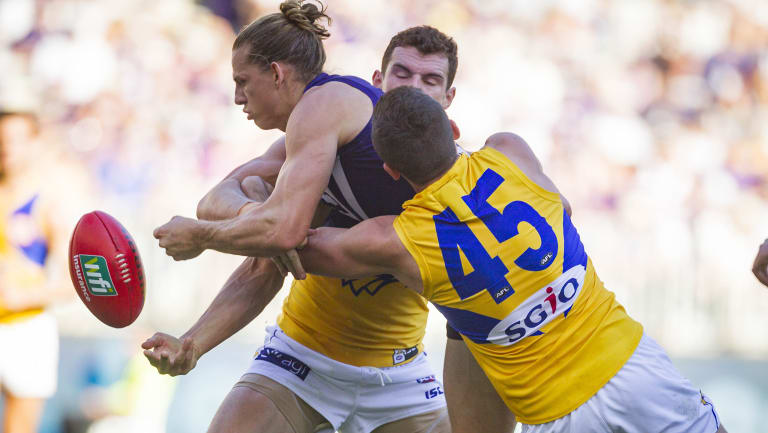 Going into the 47th Derby, the talking point was Fremantle’s forward line, mainly how it could score enough goals to win the game.

There were concerns about whether it was dangerous enough with Matt Taberner no longer in it due to a foot injury.

Fremantle had averaged 103 points per game at Optus Stadium this season.

But they opted to bring in Michael Johnson to help Aaron Sandilands in the ruck, rather than Shane Kersten as a direct key forward swap. 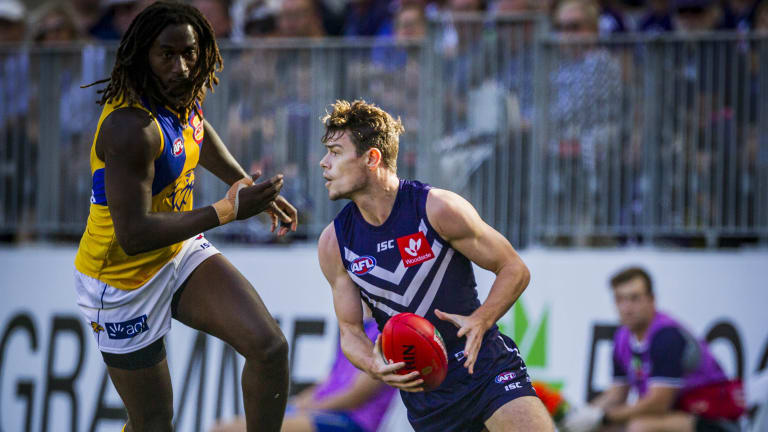 But the Dockers defied their lack of opportunity in front of goals in the opening term to lead by 20 points at quarter-time.

For most of the first half, it looked as though they wouldn’t get enough opportunity to make a call as to whether their attack would work without their key target.

They couldn’t get it in there. 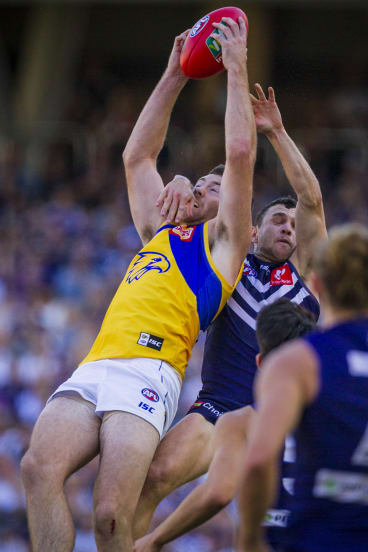 Cam McCarthy managed two goals and looked dangerous, but he could have and should have booted more.

Having him as their sole obvious target in attack also made life easy for West Coast’s intercept marking expert Jeremy McGovern.

At quarter-time, the Dockers had gone into attack seven times. They had 4.3 on the board, but McGovern had already taken five marks and had nine possessions. He finished with a handy 10 marks and 19 touches.

Most of the Dockers concerns came further up the ground. They only had 45 inside 50 entries for the game, compared to the Eagles 55.

Somehow the Dockers were able to find enough goals to stay in the game. They led by 20 points at quarter-time despite having 10 fewer journeys in to their attack than the Eagles (17-7).

The game was probably determined when Michael Walters went off with a knee injury early in the second term and was unable to return, the tide swung – massively. The injury doesn’t look like an ACL, as he came back on – briefly – but he is likely to be on the sidelines for a few weeks.

Walters leads the Dockers goal scoring this season with 10 goals, including the first of Sunday’s clash.

The Eagles kicked five goals to Fremantle’s one in that second term to go in at half-time eight points in front.

But as West Coast have done too often though, they kept their opposition in the game.

Fremantle just didn’t have the man power up forward to convert.