Ecuador has been here before. Two years ago, to be precise, when he bounced off a beaten Hawkesbury Cup effort to win the Lord Mayors Cup at Rosehill seven day later.Jockey Adam Hyeronimus remembers it as the day he got back on one of his favourites. On that occasion Ecuador was coming off a game sixth at Hawkesbury; this year he heads to Rosehill after being the Hawkesbury Cup runner-up. 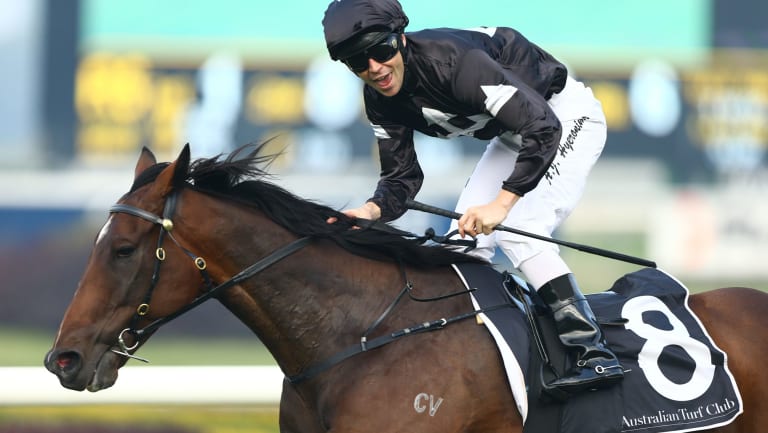 Back again: Adam Hyeronimus has time to look at the camera as Ecuador wins the Lord Mayors Cup two years ago.

“I won his maiden on him and think it was the first time I got back on him,” Hyeronimus said. “Timmy Clark rode him at Hawkesbury two years ago and when Gai decided to back him up I got the call-up. He actually thrived on the quick back-up and then went on to win the McKell Cup as well. It was the start of his best form.”The old warrior is now an eight-year-old and his 10 wins, five with Hyeronimus in the saddle, have him at the top of the weights. It weighed him down at Hawkesbury when Kingsguard sprinted past him but he held the margin to only three-quarters of a length.“Once the other horse went past me last week I knew I wasn’t going to fight back and beat him, but I also knew he wouldn’t give in,” Hyeronimus said. ‘‘He has that big weight, which makes it tough for him these days, but this is his level and they will have to beat him. He has stepped up to group 1 level but they are just too good for him there.”Ecuador has been twice group 1 placed and last spring his form carries the names of Winx and Happy Clapper, which had at least a couple of lengths on him. But once he returned to group 3 and listed level he was very competitive.Co-trainer Adrian Bott admitted the Lord Mayors Cup was a change of tack but is confident he has the grounding to be hard to beat.“The original plan was to go through the Scone Cup but he just found them a little bit sharp for him over the mile at Hawkesbury and he is probably better suited at the 2000m now,” Bott said.“We thought if we went to Scone the same thing would happen, so we decided to back him up. It is not ideal but he has done this before and at his third run [since a spell] he is very fit. Now he is an older horse he has probably just lost that dash he had at a mile and he is well up in the handicap as well, so he has to be at his best to win.“Going this way opens up to another Brisbane campaign, which he has done before.”Ecuador has been soft in betting for the Lord Mayors, drifting to $3, and is second pick behind Nettoyer, which is coming off solid carnival form to be the top pick at $2.50. She has only won once in nine starts but group placings in the Epona Stakes and JRA Plate this preparation have a black-type win high on the agenda.

Trainer Wendy Roche decided that carrying only 53kg in the Lord Mayors was easier than weight-for-age in the Hollindale Stakes at the Gold Coast.“She’s still learning, she’s improved since her last start and I think she will improve for her next three or four starts,’’ Roche told Racing NSW. “If she acquits herself well and happens to win, like I think she deserves, we’ll go to Brisbane then.”