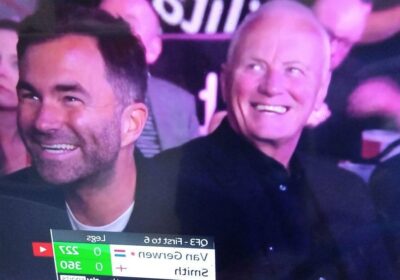 Offbeat news from the world of sport

Darts fans have been left bemused after Eddie Hearn and father Barry were booed by sections of the crowd during the Premier League darts in Newcastle.

Hearn junior has taken over as chairman of Matchroom Sport, which includes the Professional Darts Corporation, after Barry stepped into semi-retirement last year. Both were present in the north-east as the league phase of the Premier League came to an end, with Joe Cullen securing the final play-off spot.

The camera flashed to the dad and son duo early in the third match of the night between Michael van Gerwen and Michael Smith. Surprisingly, given their role in the sport, they received some boos from the crowd, but they took it in good spirit and eventually broke into smiles.

“Look at those two,” said Wayne Mardle on commentary. “Eddie Hearn and Barry. Barry was one the one with the grey hair” while fellow commentary Mark Webster asked: “Which was getting the boos?”

Many fans were left mystified by the reaction, with many taking to social media to defend the Hearns. Connor Stewart posted on Facebook: “Bit weird given how Barry transformed the sport.”

John Hally added: “If it wasn't for the Hearns, especially the father, darts would still be a backwards game played by beer-swilling fellas. Those days are gone and good riddance. The players, even ordinary people, now are enjoying the games. The yobs are the guys who go with no interest except the beer.”

Barry Stuart said: “The man who has evolved the game into the one they are attending. Unfortunately, the darts is being overrun with drunks that have no interest in the darts.”

Was it harsh to boo the Hearns? Have your say in the comments section below. Meanwhile, Fred Dinsmore pointed out: “Crazy.. they’re only there because Barry Hearn is a genius and Eddie Hearn is showing he’s clearly inherited his brilliance.”

Jackie Shanley wrote: “The crowd are so immature, they're at professional darts, not the Xmas panto, wish they would show more respect” while Grant Black added: “No idea why.. darts wouldn’t be half the sport it is now without them.”

But Alistair Carlyle reckons it was no big deal, insisting: “It’s called banter, just like they boo Price every week” and Brian Phillips said: “Not booing the old man. Just his son, not a very well liked man. Very cocky so and so.”