Elijah Taylor was dazed but is not confused about concussion The Wests Tigers and New Zealand international returns from his latest head knock against the New Zealand Warriors at Mt Smart Stadium on Saturday. 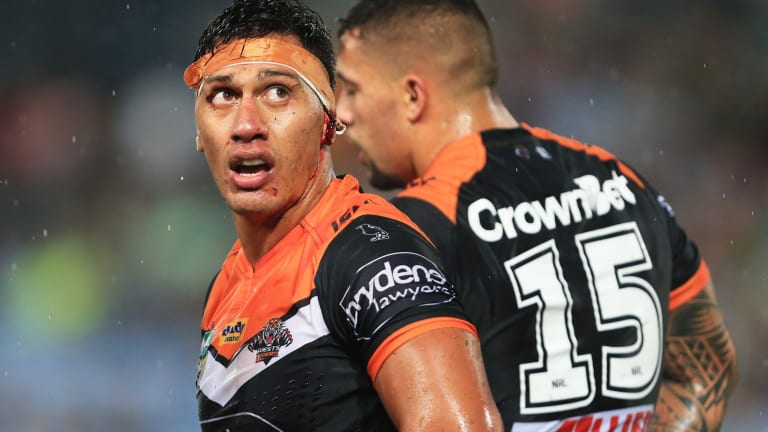 While Taylor says game-day cognitive tests are still easy to pass, he believes players no longer feel pressured to return at all costs if they do not feel 100 per cent.

The 28-year-old's latest incident, which forced him from the field against Newcastle a fortnight ago, left him ill for a week.

Since 2014 the NRL have devoted plenty of time working out the proper concussion protocols in a bid to stamp out the ugly images of battle-hardened players refusing to let down their mates by coming from the field when knocked senseless.

"The younger me would have played last weekend, 100 per cent, but those days are gone when you trying to be tough,'' Taylor told Fairfax Media.

"You're only doing damage to your head. You only get the one brain.

"Everyone is well educated about it, we've done workshops with the NRL and former players.

"The cog test is pretty easy to pass, but you know yourself if you're right or not. It's about making informed decisions.

"I'm very grateful I have a coach and coaching staff who are understanding and they respect your decision and there's no pressure. I've heard stories there is pressure from other coaches for their players to make sure you back up.

"Times are definitely changing and there's a lot more awareness around concussion."

The first time Taylor was knocked out was when he was playing at school. More recently, was not permitted to return to the field by the NRL doctor during a game at Leichhardt Oval against North Queensland in 2016.

"I had full recollection of that day. There was some friendly fire from one of the boys," Taylor said.

"But in Tamworth a couple of weeks ago I was sleepy all week, I was fatigued and when I went for a jog my head would start throbbing.''

Taylor now wears headgear but said it had nothing to do with concussion but was more to protect the nasty cuts all over his head.

The experienced lock forward is keen to cross the ditch and play against the Warriors, where he once played under Tigers coach Ivan Cleary.

The Tigers have lost their past two matches against the Knights and Eels by two points and meet a Warriors team looking to bounce back from a Melbourne flogging.

"After the World Cup rugby league was on the decline after the Kiwis bombed out early but when the Warriors are doing well rugby league goes well. It will be a massive match-up," Taylor said.

As for the potential appointment of Michael Maguire as the new New Zealand coach Taylor had nothing but praise and said Thomas Leuluai, who played under Maguire at Wigan, once told him "he was one of the best coaches he ever had".