Australian rugby's biggest competitor for Israel Folau's signature appears to be European rugby and not the NRL after English club Sale reportedly made a $1.4 million-a-season bid for the dual international.

Sunday's edition of The Rugby Paper reported the Greater Manchester club, which is also home to former Wallaby James O'Connor and England bad boy Danny Cipriani before he moved to Wasps, was prepared to offer Folau $1.4 million to play for them in the English Premiership. 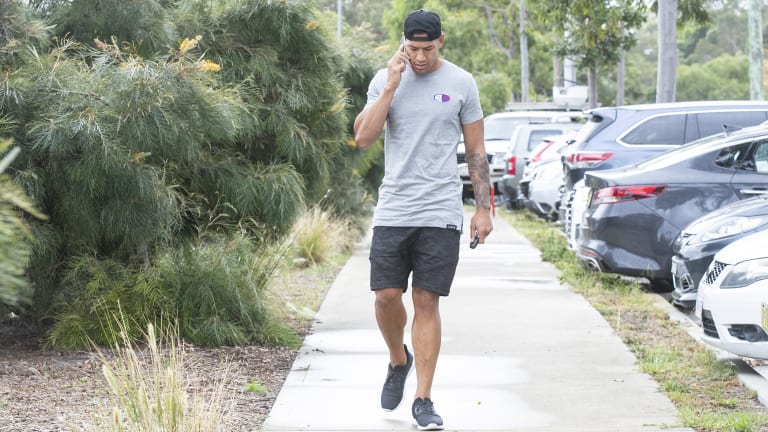 In demand: Sale Sharks have reportedly made a big-money offer for the dual international.

The club distanced itself from the report on Sunday but director of rugby Steve Diamond last year rubbished reports linking Marland Yarde with Sale before signing him to a three-year deal days later.

It is understood the Sharks are on the lookout for a "world class No.15" after losing rostered fullbacks Mike Haley and Will Addison in the past two months. The club also made a play for on-contract Blues centre Sonny Bill Williams last year, backed by the club's multimillionaire owner Simon Orange.

The report crystallises the pecking order of sports and regions in the hunt for top flight talent. Silly money is on offer in Europe and Japan for players willing to sign on ahead of a World Cup year, well above what even the wealthiest NRL clubs would pay their biggest stars.

Folau could be particularly vulnerable to offers because, as a 63-Test Wallaby, he would still be eligible to play for Australia from a European base.

What is not clear is how his recent comments about gay people will effect his attractiveness offshore. In January, France centre Mathieu Bastareaud accepted a three-week ban for using a homophobic slur on the field during a Champions Cup clash with Benetton. The suspension was seen as too lenient in some quarters.

Folau, a three-time John Eales medallist, is off contract at the end of this year and has been in talks to extend beyond the World Cup, with the Waratahs hoping to lock him in for another three seasons.

In his response to the recent furore about his comments, Folau confirmed European rugby was on his – or at least his agent's – radar.

"There have been things written about me angling to get a release from my Rugby Australia deal to pursue an NRL contract. That simply isn’t true. There have been rugby offers from the UK, Europe and Japan that are way above anything I could earn in Australia," he wrote on the Players Voice website.

The column also confirmed widely reported tensions between Folau and his employers Rugby Australia and the NSW Waratahs, again stemming from his Instagram remark that gay people were destined for hell. Folau said he felt "misrepresented" by RA chief Raelene Castle's comments that the fullback regretted not putting a "more positive spin" on his beliefs.

RA was on the cusp of finding him in breach of its code of conduct when the article appeared. After its publication, Castle said she accepted his clarification and would take no further action.

The organisation copped severe backlash from all corners over its handling of the matter. Behind the scenes, sources have told Fairfax Media that the episode highlighted Folau's growing self-imposed isolation. Some trusted allies in the game tried but failed to reach out to him during the recent saga, adding to suspicions he could be preparing to cut ties after five-and-a-half years at the Waratahs.